Director David Cronenberg is always a very distinctive filmmaker and 1999’s eXistenZ was no exception. It’s a futuristic thriller that plays off the various layers of reality found within videogames, meshed with corporate espionage and a dash of sexual energy. The script is smarter than the average sci-fi vehicle churned out by Hollywood these days, though its lack of action for long stretches and use of heady concepts probably were the reason for its dismal box office performance. While eXistenZ doesn’t have huge replay value once you know the twists and turns of the narrative, it’s a fun ride the first time around.

In the near future, most of the population has had “bioports” installed in their spine, so they can directly interface with the immersive videogames of the day. Featuring a strange design aesthetic for a futuristic film, videogame hardware and other forms of technology have completely evolved into being biological and organic in nature. The world’s best game designer, a woman with a fierce love of gaming called Allegra Geller (Jennifer Jason Leigh), is trying out her newest game for the first time, eXistenZ, to a small group of beta testers. It’s here where the story really begins, as the demo is interrupted by an assassin intent on stopping Geller and destroying the only copy of the game.

A low-level corporate drone, Ted Pikul (Jude Law) comes to Geller’s aid and is now thrust into the role of being her confidant and protector after they escape together. Geller is intensely concerned the videogame has been damaged and needs to test it out in secret with Pikul, as they are continuously on the run from assassins and the odd characters they come across. Cronenberg plays up the differences between the game’s reality and the real world, though the two seem to start blending and play off one another as the story progresses.

I think some of the scenes work better if the audience has at least a passing familiarity with the conventions found in videogames. Later in the movie Cronenberg actually attempts to introduce the idea of an NPC, a common element of modern gaming. A non-player character (NPC), sometimes known as a non-person character or non-playable character, in a game is any character not controlled by a player. This stuff will likely fly right over the head of viewers unfamiliar with the concept. Its introduction into the story feels slightly clunky and a nod to the popular videogames of the ’90s. eXistenZ has enough surprises in its narrative and a slinky lead performance by Jennifer Jason Leigh to make it worthwhile for even the jaded sci-fi viewer. 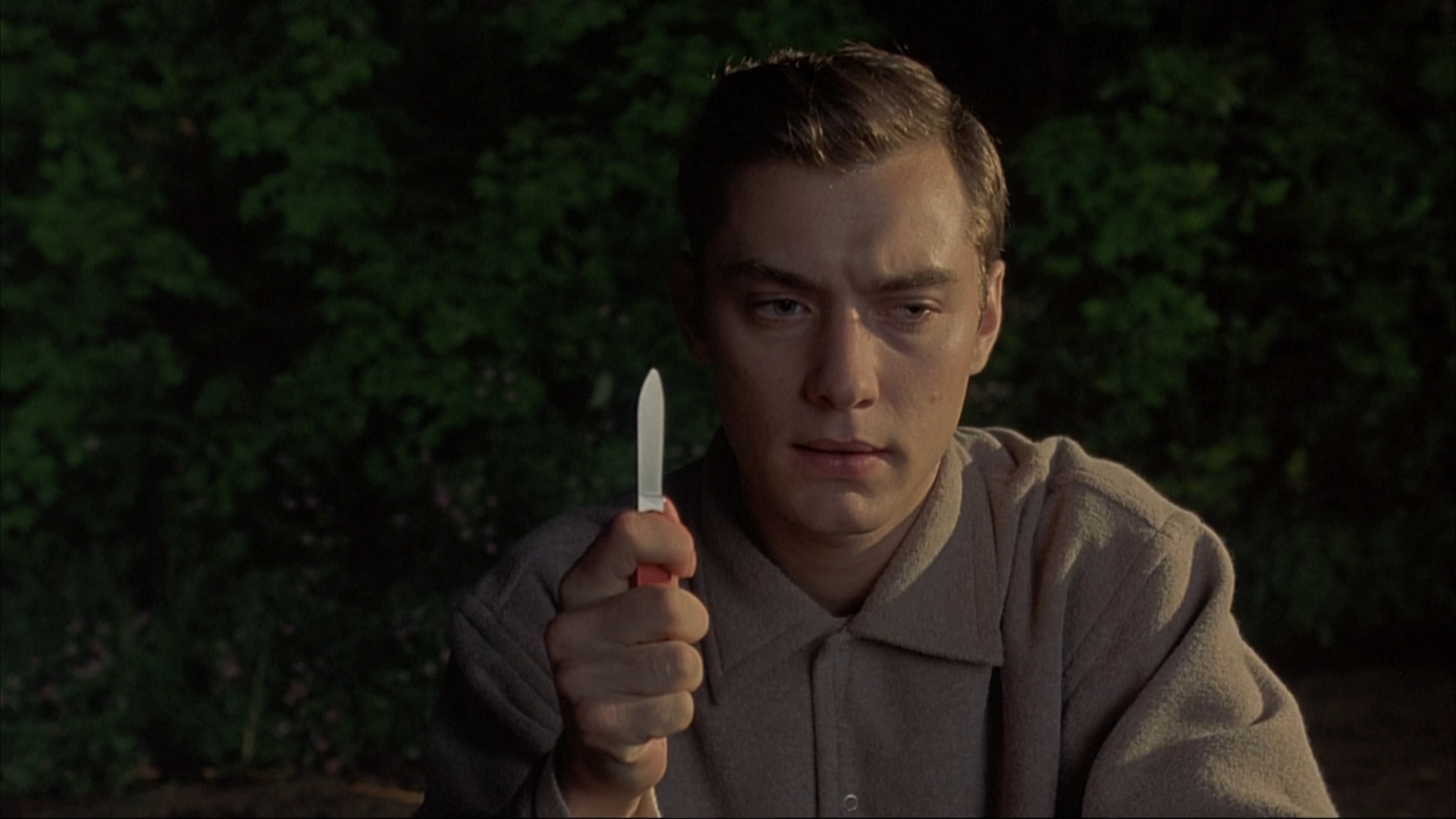 The 1999 film receives a 1080i presentation, framed in a 1:78:1 aspect ratio that slightly opens up its original, spherical 1:85:1 framing. While changes appear to have been made to the film’s original color timing based on comparative images with other editions, Echo Bridge has used a solid broadcast master for this transfer that looks better than a lot of the Blu-ray product they happen to put out.

Not everything is perfect unfortunately with this particular edition’s video quality. The AVC encode averages a meager 15.84 Mbps, as Echo Bridge confined the 97-minute movie to a BD-25 with several extra features in HD. Ironically Echo Bridge also released eXistenZ in a six-pack, and that edition surprisingly gives the movie a much higher video bitrate average of 21.28 Mbps. The solo feature introduces a few stray shots of posterization and banding that could have been easily eliminated.

Another difference between the six-pack transfer and this solo disc are the changes to the brightness levels. They appear to have been created from the same HD broadcast master, but the solo disc’s transfer has been brightened considerably over the the six-pack’s transfer. That is a problem, as the intended look for eXistenZ has always been dark. The brightened levels on this solo disc are simply incorrect and not an accurate portrayal of the movie’s intended appearance.

Aside from the aforementioned issues, eXistenZ looks average to very good at times. It had a huge budget and the cinematography is fantastic, producing a crisp and clean filmic appearance that largely remains on the BD. Detail here is substantially better than the original DVD versions from Miramax or Alliance, made long ago when that format was still somewhat new. Select scenes do have traces of bad ringing and an abundance of halos, but all things considered the transfer has not been hit with a large dose of digital noise reduction. The movie is sharp and rarely goes soft, even in the FX shots. Clarity is impressive much of the time and many viewers will find the brightened contrast a pleasing change, even if it is not correct.

Echo Bridge has provided this film from Miramax’s library with two audio options. The main soundtrack is a 5.1 DTS-HD MA affair which has a fairly spacious mix, though surround usage is a tad restrained by modern standards. There are a few subtle audio cues in the surround channels, but the presentation is largely confined to the front soundstage. A scene late in the movie makes the soundtrack come alive with action and will heavily employ your subwoofer to full effect. Fidelity is excellent in general while the dialogue is crystal-clear and pinpoint.

For no good reason, Echo Bridge has also provided a 2.0 DTS-HD MA soundtrack, though every BD player on the market can down-mix the 5.1 soundtrack to stereo without the need of a separate audio track. No subtitles of any kind are on the disc.

Interview With Jude Law (14:39 in HD, created from upscaled SD) – A solid extra feature in the form of a long interview with the main star, though it rarely goes beyond the norms of most Hollywood marketing fluff found in electronic press kits.

Interview With Willen Dafoe (6:57 in HD, created from upscaled SD) – Brief and to the point, there isn’t much to this interview because Dafoe’s character is such a minor supporting character in the film.

Interview With the Special Effects Supervisor (27:41 in HD, created from upscaled SD) – This is by far the most intriguing special feature, as there is a lot of background information given on the film’s production. FX hounds will eat up the tidbits of trivia and inside secrets of creating the organic creatures seen in the movie. There is a terrible audio problem with it as the 2.0 Dolby Digital mix confines the speaker’s voice to the front left channel.

Echo Bridge did make a reasonable effort in finding these special features for this BD release. Hardcore fans of eXistenZ though should know this BD lacks many of the extra features found on the original 2-disc DVD set, released by Alliance in Canada.