Expendables 2 opens on land, the mercs for hire bursting into a camp to rescue one of their own. During the escape, they snag a speed boat, leading to a blisteringly high volume chase, only to be assisted by a grimacing Barney Ross (Sylvester Stallone) in the air.

Is Expendables 2 better than the first? Probably. It’s a shame movies need those things known as “plots.” It tends to dim the excessive fun provided by these ludicrous action throwbacks. You end up with characters like Bill the Kid (Liam Hemsworth) who sticks out for his age and purpose – or lack thereof. If his arc leads to Stallone staring at the camera to deliver the trailer-riffic line, “Track ’em, find ’em, kill ’em,” it’s all good.

The crew is after Valain (Jean-Claude Van Damme), a smirking, sadistic kick thrower. He’s after plutonium buried underground in an abandoned mine, pulling slave labor from local villages. It lets Expendables 2 breathe a bit, the war spilling not only to underground camps but airports and abandoned towns. The variety injects another level of energy in a film that should exhaust itself in 20-minutes, but it pushes on for 90 without stopping for breath.

Expendables 2 makes shooting faceless, nameless henchman a blast. It’s remarkable how high a body count can rise without repetition settling in. The likes of Jason Statham will shift things into the martial arts, an astonishingly well put together knife fight near the close a gem that appreciates the stunt work in front of the lens.

In the midst of all the shooting, punching, and stabbing, character is tossed to the wayside – as if anyone actually cares. Development is exchanged for cheesy one-liners referencing the actor’s previous roles or internet fame. Squeezed into the middle of the chaos, it’s perfect relief.

When heads stop exploding, chests stop being ripped apart, tanks stop blowing up, cars stop flipping, bridges stop collapsing, planes stop crashing, and boats stop sinking, Expendables 2 does dip into the personal side of these hired guns. Dolph Lundgren’s Gunnar comes through as a slightly off-kilter genius, Lee Christmas (Statham) as ladies man, and Hale (Terry Crews) the chef. It’s enough to work with, and hailing these stars back into their prime for such gloriously impossible action (again) is going to do it for most anyway. 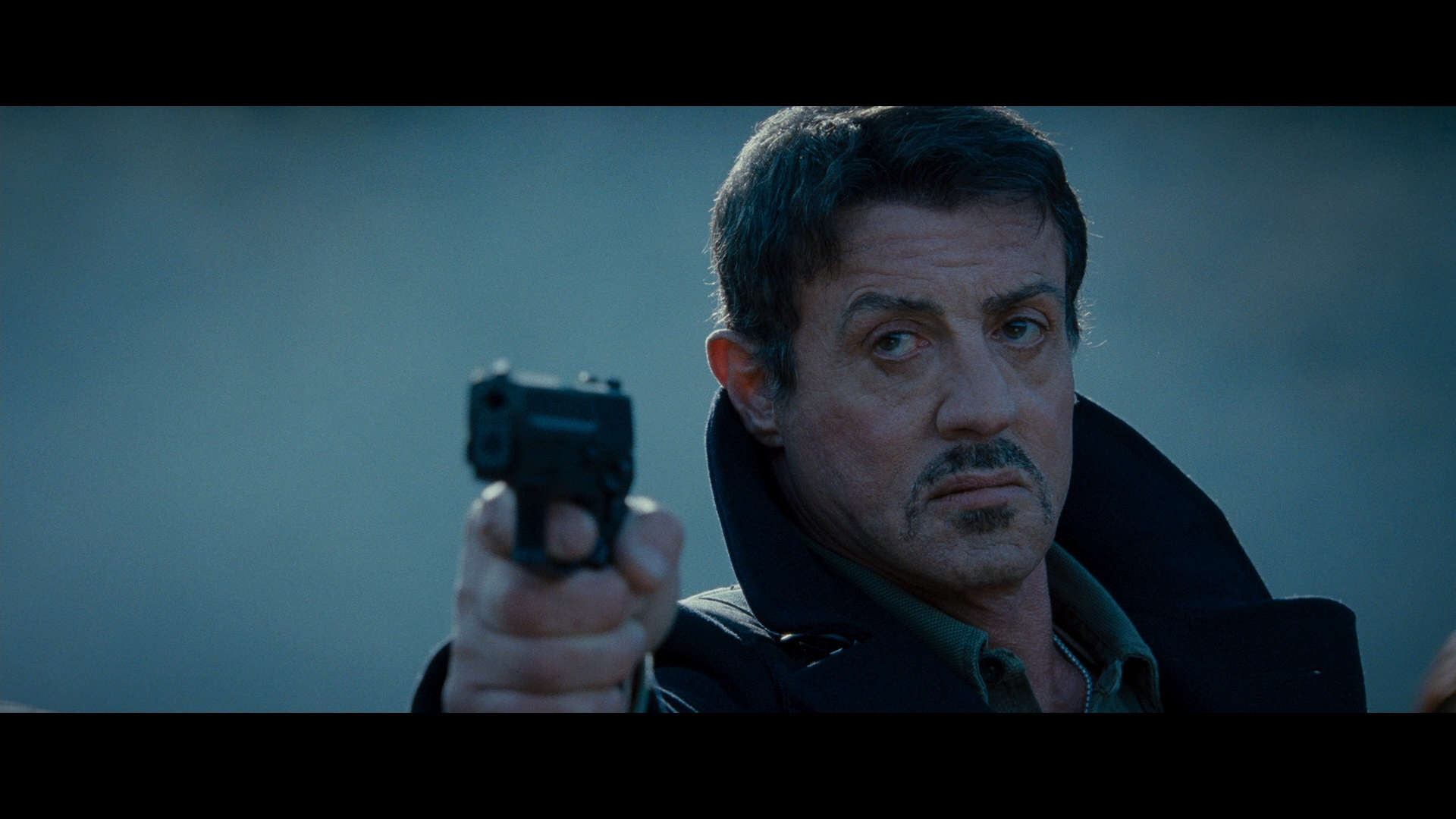 Oh dear. Lionsgate didn’t provide a review copy for Expendables 2, so that’s led us here. The rental disc is missing a lot (more on that later), but it’s unlikely the company punched out a secondary video encode just for a dwindling market. Besides, the bitrate is high enough that Expendables 2 should not look like this… ever.

Embarrassing comes to mind, this transfer littered with DVD era compression at a time when AVC encodes can be completely invisible. Source film grain is fine – preferred even – but when handled in this egregious manner, there’s no excuse possible. It jumps from being overly perky in one scene, smashed into a digital corner the next, and then can completely disappear within one edit. Inconsistent doesn’t work. Appallingly messy is better.

It’s clear that some actors are getting up in age and they’re not happy with the fidelity of modern cinema. That would explain some of the unbearable filtering being used on at least half of these images. That’s not an exaggeration. It’s nice to have screens representing the entire cast in close, showing texture on the close-ups, but with this disc that idea was bodyslammed. There were no opportunities.

There’s hope when the disc is first booted. Shots of the enemy camp are dense, with a grand sharpness that handles the structures, landscapes, and resolves grass with the best of them. Jumpy photography hops into the driver seat for jarring quality shifts that seem dependent on the action. As it turns out, no matter the scene, the incredible mush that peers in on the drivers (and shooters for that matter) is destined for the entire movie.

Is Expendables 2 unwatchable? No, of course not. You’re here for the action, and some murky images won’t impede on the bloodshed. Maybe the vomit-esque color choices will dampen the fun – an orange and teal bar fight abrasive – but it’s all manageable. It comes down to expectations, including the minimal ones set by the first Expendables. This is a $90 million dollar production, and it’s bested in almost every regard by independent films with off the shelf equipment. There’s no gloss, no energy, and no detail. Pathetic.

Think the video was coarse? Lionsgate makes a marketing deal out of the Expendables 2 first ever DTS-HD Neo X 11.1 home theater mix. That could be downgraded to DTS-HD 7.1 for those without the needed equipment. The rental disc? Dolby Digital 5.1. Seriously.

Expendables 2 via rental thus sounds awful. You don’t realize how accustomed you’ve become to uncompressed audio until your thrown back into the era of Dolby Digital. Bass is flat, with crashing planes barely registering even if you up the volume. Gunfire tracking lacks precision, and effects sound muted or lost. Highs are middling, and dialogue stumbles over itself (Stallone at 42:24).

Action peaks are sub-par no matter their scale. Tank rounds are fired with little to no recognizable force. The collapse of a mine seems to click for a second before the falling rocks suddenly cease their low-end activity. Engines from vehicles must not exist in this world either. Smaller elements, ranging from wolves howling to slaves picking away at rocks, slip into the rears almost unnoticed.

Way to not sell potential customers on the mix.

No extras. Those only exist on the retail edition.

Note: There were around 25 screens planned to coincide with this review. Because Lionsgate did not send a retail copy and the rental copy contains a different file structure, Lionsgsate’s DRM won. The sheer idiocy of their restrictive DRM to legitimate customers is baffling, and only hurts them in the end. What you see is all that could be scrounged up through their out of sequence playlist shenanigans.