Spider-Man is a high schooler in this re-imagining/reboot, but the cast is aged beyond those years. For that matter, so are their characters. Gwen Stacy (Emma Stone) is a bright, intelligent upstart at Oscorp, attracted to the over burdened Peter Parker (Andrew Garfield), who of course is bitten by a spider with rather spectacular properties.

Parker is the focus of Amazing Spider-Man, not the Marvel hero who has spanned generations. Somewhere down the line somebody thought it would be a great idea to “Batman-ify” this usually spunky, wise-cracking hero. Box office dollars speak, although in the process, there’s a younger set of Spidey gurus undergoing their own burden: boredom.

There is some interesting material, but it’s framed in a way that feels inherently familiar, and that’s not just speaking of the origin story. Parker is forced to confront Stacy’s police chief father (Denis Leary) at the dinner table about this masked vigilante taking out car thieves around town. The end result is forced conflict, a set-up to create tension during a late moment stand off in the middle of New York. Oh, and no one manages to capture this on film to reveal Spider-man’s true identity. Evacuation or not, it’s New York.

Situating this responsibility parable in high school means the story arc loses the Daily Bugle, Parker’s photographic obsession literally smashed for a plot convenience. One can suppose that’s meant for the sequel, but it also drains the accessibility of this character. Amazing humanizes and grounds Parker through emotions, not via day job where he’s abused relentlessly by an enjoyable loud mouth.

Know what is also missing? The metaphorical color. So drained of energy and liveliness, Amazing is softened as it enters into the pantheon of this super hot genre. Where films like Avengers will explode in a flurry of one-liners and charisma, Spider-Man has somehow lost his edge plus some of his character. He’s not having fun short of the Stan Lee cameo and a brief rumble with a car thief -made almost entirely for trailer fodder- so why should the audience?

Because so many of these features boil down to versus films, in steps the CG Lizard, or rather Curt Connors (Rhys Ifans). So invested in Spider-Man is this film, Connors’ own conflicts fail to branch out beyond the stereotypical Dr. Jeckyl scenario. Again, Amazing feels constructed to fit a frame.

Sequences of Spider-Man drifting through the expanse of his home city are exhilarating, if all too late. Interestingly, there’s a sliver of a plot thread concerning the rescue of a small child which is planted to give the father something to do later. It dilutes some of the selfless nature of the heroic elements, instead planting the idea of karma firmly into the fray. Something positive had to happen to this version of Spider-Man, because they couldn’t fit any more angst into this script if they tried. 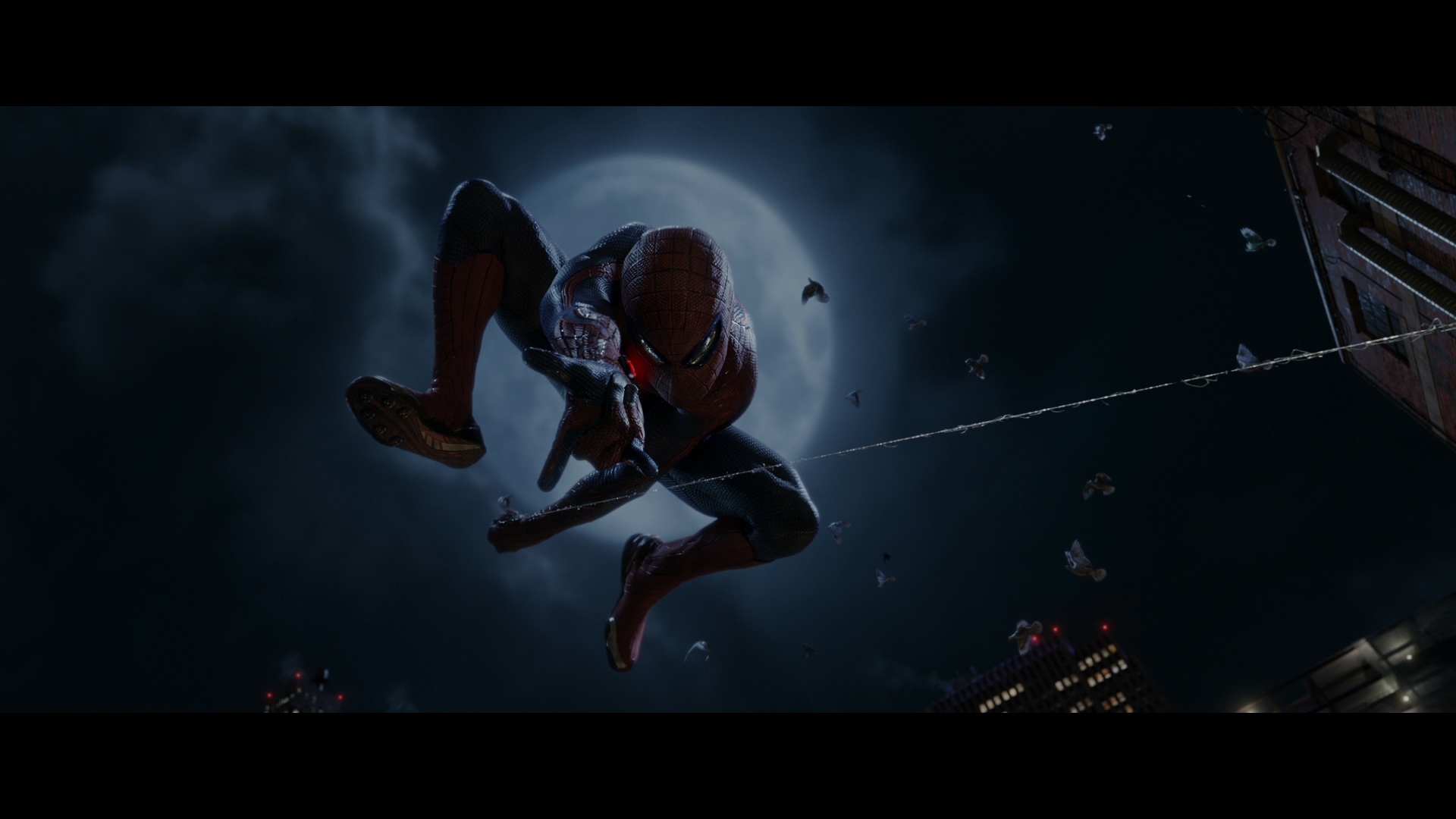 Sluggish blacks are the first hallmark of this summer blockbuster, the opening shot of a young Parker playing hide-and-seek in a dimly lit home lacking in density. Thankfully, it’s a brief loss of perfection in the blacks, those nighttime trips through the New York skyline simply spectacular in their wealth of depth. Nothing is lost in those images, bright lights striking against the overwhelming contrast being created in those views.

Color timing skews bright with a determined focus on reds and blues. It’s appropriate. The new Spider-Man costume is a stunner, both of texture and saturation. Standing out against the cold and heated lights, he becomes a dominating figure no matter the circumstances. The suit doesn’t require any significant lighting to shine, even underground in the sewers. A bit of shimmering is totally appreciated for a little extra fidelity.

Amazing Spider-Man probably doesn’t earn the title consistent, but it does remain clean. Noise is quite limited to a handful of shots, evaporating upon edits. Considering how dark the film can be, this digital source holds out against the usual impact of low light artifacts. In close, the piece is capable of substantial definition. As tends to be the norm, the medium shots will often languish in a slightly smeary, soft quality that robs the piece of tightness. Most will be too concentrated on the spectacular texture being strewn about on the computer generated Lizard to even care. He’s an ugly sucker.

It’s dazzling to see New York in this light, and that’s critical considering how often it’s displayed in full. First-person shots are rife with sharpness, and panoramas are stunning. If nothing else, that’s what this disc will be forever remembered for. Clean, glossy, and sharp as it is, Amazing Spider-Man doesn’t ascend over any other Hollywood blockbuster in its presentation, but it is easy to be taken in by its bright spots.

What can be counted on is the audio, as disc that mirrors the slow start of the feature itself, then catapults into greatness. New York may not come across as rich in ambiance (odd to say the least) but the Oscorp labs have machines whirring, moving, and traveling in a variety of directions. A kind of/sort of training sequence inside an abandon factory is a gem of a non-action moment too, Parker working out his moves as sound echoes heavily off the steel frame.

Little touches never truly end, the best of them being Spider-Man’s web swing. Shots pop from his wrist and travel into the rears where a definite sound is caught as the web latches on. The effect truly enhances those moments as Spidey works towards the lens, and the first-person shots hammers home the idea of a tired Parker. Breathing lands in the surrounds.

Short of some obvious ADR work during a dinner (1:09:22), the disc’s aural effort is arguably perfect. Bass smashes as fights ensue, the power and weight of the Lizard sold through the design. Smashing cars are exceptional as citizens panic, and gunfire? Wow. As SWAT teams work over a mutated Dr. Connors with machine guns, the effect is stunning. Each shot comes from a precise location, and splits skin open as it connects into the stereos. That 30-seconds or so is a near show stealer.

Then, the finale happens, with dispersing mist, radio towers falling, shotgun blasts, glass shattering and cracking walls. It’s all over the place, with the viewer in the center. It’s a mix that extends the action beyond what’s on the screen, and does it so well, you’ll hardly realize you’re being pulled in. It’s seamless.

Extras are sprawled across two discs, the first hosting a commentary from director Marc Webb with his producers, Avi Arad and Matt Tolmach. Trailers and Second Screen materials are also offered.

The big one here is a nearly two-hour making-of, a substantial, deep, and involved piece titled Rite of Passage. Split into seven sections, this one digs deep, acknowledging the films prior and what needed to be done in order to create a fresh start. Visual effects, physical or otherwise, are discussed, along with location shoots and the post-release. Eleven deleted scenes run a little over 16-minutes, moving into 40-minutes of pre-visualization. Another gallery breaks down individual designs for Spider-Man, the Lizard, and the sets. Some progression reels follow.

The best stuff here after all of that? Stunt rehearsals. This raw footage is spectacular in how it’s all done. The level of effects utilized and needed is remarkable when viewed without commentary. A brief look at the (merely okay) Amazing Spider-Man video game is the last piece.