Wall Street survives not because of its stock swindling, but it’s energy drawn from Charlie Sheen. He’s tired of the cold calls made to strangers with his low rookie status. He wants more. He’s knowledgeable, so in his mind, he deserves it. Sheen makes a power play at Gordon Gekko (Michael Douglas), an instantly sleazy stock man with money in places that couldn’t be tracked. Sheen wants in.

Sheen’s Bud Fox goes from wide-eyed excitement, the thrill of having a shot at it all, to the depths that couldn’t sink him any lower. Fox becomes a broken man after playing a game, a character arc that drives this narrative and solidifies an 1987 Oscar contender.

But, no one can ignore Gekko – it’s the reason the film captured Hollywood’s award in the first place. He’s so subtle in his manipulation that the eager Fox jumps in unsuspectingly. Despite the warnings, some even indirect from Gekko, Fox still wants more. Fox’s power play becomes Gekko’s right out from under him, a financial move with character built in.

The film treats Gekko as an evolving superstar, almost mysterious as his silhouette is closed upon by office doors. It builds a mystique around a financial master who uses the game, film craftsmanship revealing layers of Gekko’s wealth. From his office loft to extravagant architecturally minded home littered with prohibitively expensive art, it’s one money driven prize on top of another. For character purposes, he doesn’t like the art, just the money it stands for.

Wall Street never loses sight of impact. Every decision carries repercussion, where someone is hurt, whether that person is rich or poor. Wall Street isn’t damning to capitalism, just a side of it that its nature will inevitably create. Those levels, from a veteran speaking on working your way through procedure, the men who can’t keep up with the times, and those that stick out playing small ball, are crucial elements.

At the bottom is a small father figure, a union laborer who rejects the concepts of fast investments. He makes things, and in vein, warns his own son – literally as Martin and Charlie Sheen stand in furious disagreement – that Gekko is only in this business for the money.

Despite a screen villain of dominating presence, there’s the sense Gekko is Fox, or rather was. He had hopes, dreams, and a future playing straight until the allure of gold watches, sports cars, and fast women drew him elsewhere. Fox is a hero who fixes his mistakes in a system that will crash down upon the unsuspecting. Fox merely carries morals. 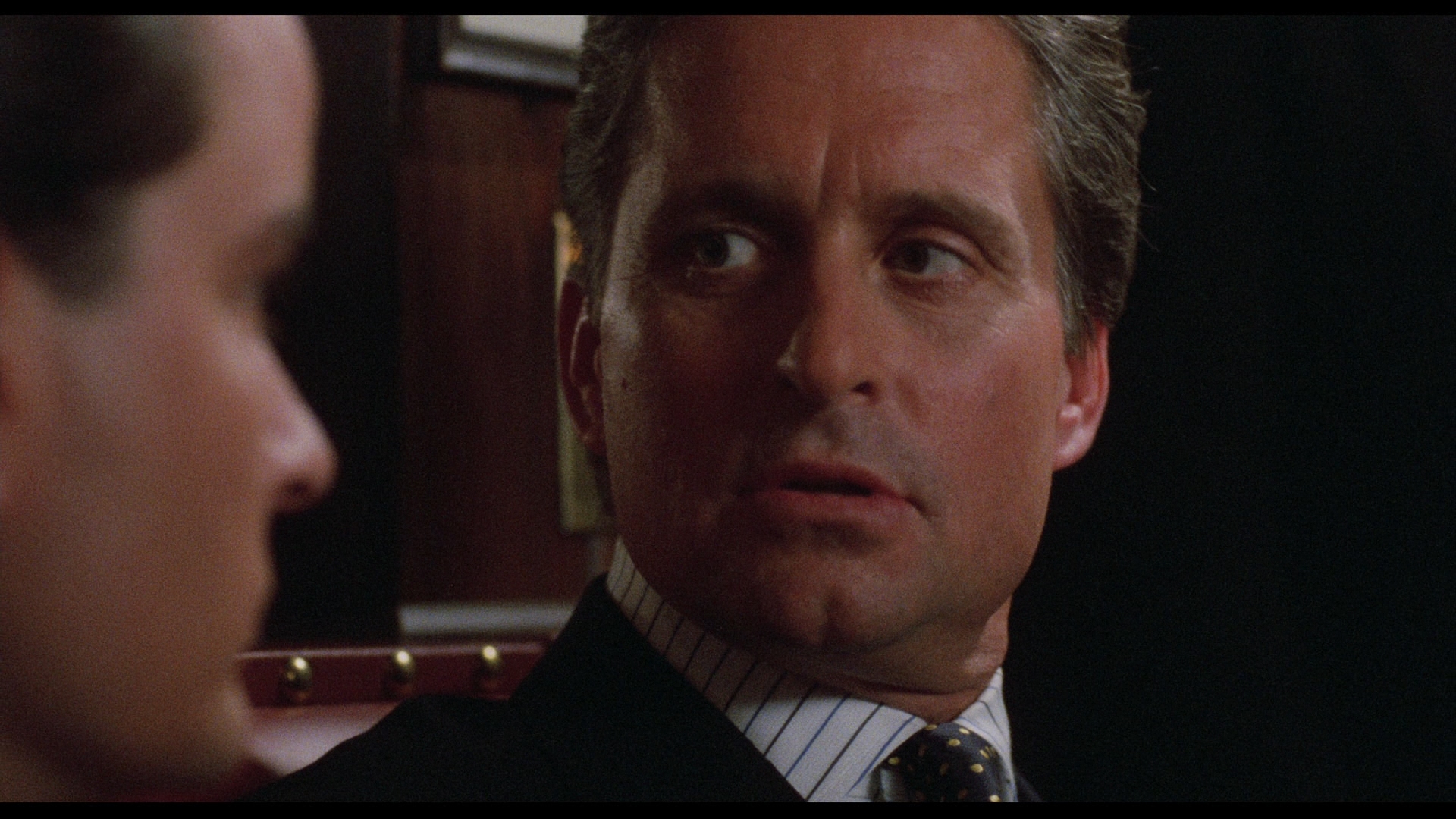 Fox’s Signature Series continues on a roll with this spirited transfer of Wall Street, and that’s not an easy thing to do. The film stock is coated with a consistently thick, weighted layer of grain that dominates the visual facade no matter the scene. While shots will raise and lower it’s impact, it’s never at a level where it can be ignored. With only a handful of shots where the compression reveals itself, this is a safe, high bitrate encode that handles what it must.

Source photography can draw some ire, from underexposure to crushing blacks that have no doubt kept their luster through the years of aging. With 25 years between release and now, the print has been kept immaculate with no immediate damage concerns. Even stray dirt or debris has been removed without any signs of tampering.

The natural look of Wall Street has been kept intact, from a filtered orange introduction to the deep color palette of fancy offices and redecorated homes. Color timing changes are not noted if they have been performed. Flesh tones in particular carry a natural vibrancy. New York’s stunning sunsets across the river are presented with a fantastic intensity.

With the grain preserved, so is the texture. Close-ups are ample and full as they’re delivered masterfully. There’s a consistency only marred by the source material which tends to dampen up the filters for the more romanticized shots of Daryl Hannah. Medium efforts appear natural, well defined, and hold to a standard of definition that delivers remnants of a high resolution scan. Wall Street looks great.

Brought into the modern age despite in-movie tech that says otherwise, the surround mix in 5.1 doesn’t always come across as natural, despite the wide sound stage. Elements include city ambiance that places chatter and passing vehicles to expand the static street level dialogue. Offices capture the frenzy of cold calls in all channels, while moments on the floor of the Stock Exchange could not capture the mass of people better were the fidelity better.

Age shows in the audio with some fading and often shaky dialogue. It doesn’t exist on an even level. It’s not environmental effects so much as it is dated recording techniques. The actual impact on the experience is likely to be nill. Familiarity with ’80s era cinema places Wall Street right in line with any other major studio production.

Oliver Stone offers thoughts via a commentary on the main feature and via 22-minutes of deleted scenes. Greed is Good is an hour long look at the stock market that necessitated the film, and Oliver Stone’s own history in the sector. Money Never Sleeps is an in-depth, 50-minute making of focused strictly on the film. It’s sometimes amazing how much set footage was captured long before it became the norm. A Fox Movie Channel piece hosted by Tim Rothman explores the characters for around 12-minutes, and closes the disc’s virtual doors.