Coming out of the business droll of the 1940s, Disney’s refocus – which included live action and television offerings – brought with it Cinderella, a chipper, gorgeous re-imagining of a fairy tale known worldwide. Dripping with bountiful beauty and memorable side characters, Cinderella only falters in the face of impenetrable, hindsight greatness – Beauty and the Beast.

Skill brings to life a small mouse family, living within the halls of an increasingly rundown mansion, spirited in regards to their lives with Cinderella. Disney has a way of taking abominable characters and situations, turning them into lively romps of color plus personality. While most of the princess roster slide into their generic grooves, Cinderella has almost accepted her situation as a super maid to an impossible step mother, vicious cat, and sneering step sisters. Designs are perfect Disney, with searing eyes and snooty noses.

Cinderella still has a bounce and a belief that someday her dreams will materialize, a message for the kids and a hope for a character that doesn’t seem to have any. None of that is lost as the film pushes forward with a focus on the mice, delivering admittedly pointless antics while brightening a film that in reality is quite downtrodden.

Pushing the piece ahead is a litany of fantastic songs, Bibbidi-Bobbidi-Boo as classically refined in the Disney history as they come. Opening the film is Dream is a Wish, a cornerstone of ideals and plot device that immediately drives the lead character in addition to the animation. Spinning and twirling in a nightgown, Cinderella happily prances while the animators dominate their craft. It’s a stunning display in a film bursting with them.

While Cinderella will run with the tradition of these films as it closes – the Prince is a mystery man of no character beyond being, well, a man – at least this Disney affair gives them one scene together. Dancing in the moonlight with backlit beauty (and remarkable shadows) does elicit some romantic connection even if it’s tenuous, while a kooky king calls for his only son to be married. That’s all these films (and stories) ever need. 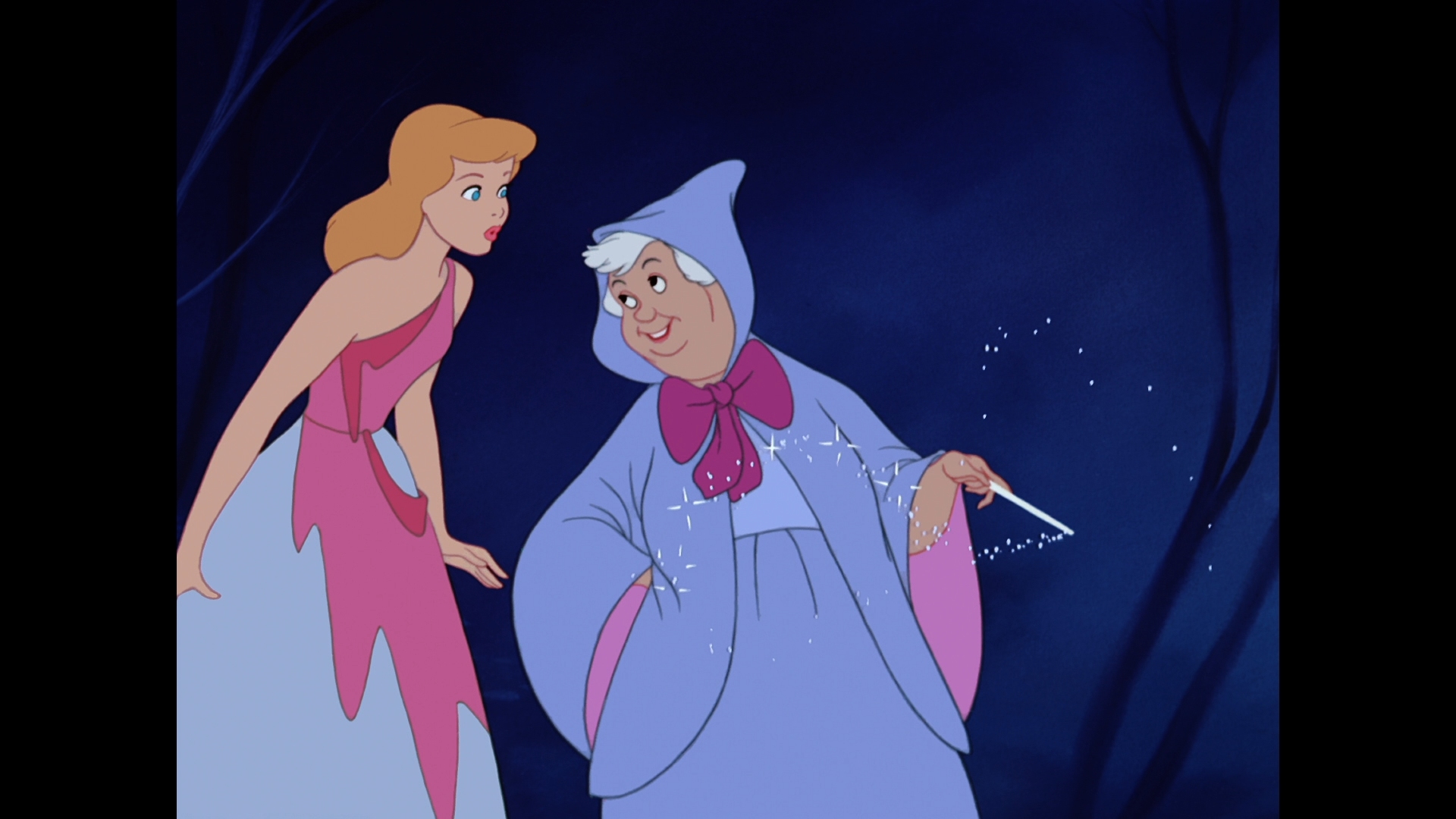 Restored for Blu-ray with Disney’s often debatable method of grain scrubbing, this HD debut is no doubt a stunner, ballooning primaries and offering a clarity that is exclusive to this format. Lines are immensely sharp, while backdrop paintings deliver supreme texture. Actual pencil lines are identifiable, as are paint strokes as the camera captures the castle.

The noise reduction method employed has its kinks. There’s little doubt it leaves evidence as to its existence, certain elements carrying a fuzzy, somewhat waxy look that is not in line with how the animation was crafted. Most of it can be noticed with a little virtual distance in the frame. Nothing has been done to counter-act the effect, leaving the image as-is without ungainly sharpening.

Is it worth losing some of the higher-end fidelity in exchange for perfect encoding? It’s arguable and no home video enthusiast will agree, but the end result is utterly pristine. Entering into its senior phase, Cinderella exhibits no source artifacts or compression gaffes. We’ll never know of any problems were the grain employed naturally simply because of the methods utilized.

Cinderella is generously bright and delivers outstanding contrast, which exceeds the already intense depth given by the layered visuals. There’s a purity to the elements outside the mansion, and a drab, often gray element to the interiors, dashed with the occasional color. The emerald entry way is a true beauty, as is the temporary pink dress worn before the ball.

With the exception of the opening narration, restorative work on the audio is stunning. Dialogue has a generous fidelity while the songs come to life with a vividness they’ve never been afforded. While the studio choirs used reveal their source (not necessarily because of age, just the rising level of clarity), the frolicking nature of Bibbidi-Bobbidi-Boo makes it sound like it was recorded in modern times.

The 7.1 mix – clean mono included separately – doesn’t find the surrounds often, not that there was a call for it to do so. A loud cat roar, scrambling mice, and a drum beat or two will surface in the surrounds. Most will have to be convinced this is utilizing the added two surround channels. The soundtrack isn’t grabbing at enough to make it sound prominent as it bleeds from the center.

Disney pushes second screen with a customizable storybook app, perfect if you can’t disconnect for 70-minutes to watch a movie. Backstage Disney brings with it four featurettes, the first detailing the life of Mary Alice O’Connor who became the real life inspiration for the Fairy Godmother. There are rarely more deserving people of accreditation. A promo tour of Walt Disney World’s latest expansion to Fantasy Land is little more than advertising, and a short film details the progress regarding the creation of a real glass slipper. Finally, a short alternate opening is created with rough sketches out of the archives.

A short based on Tangled called Ever After is a lot of fun, and it’s presented in 7.1. DVD extras are bulky with dual deleted scenes, a superb look at the version of Cinderella that almost was, and nine more sections of archival home video materials. It’s exhaustive.