From Dusk Till Dawn 2 opens in a law firm. Barry (Bruce Campbell) and Pam (Tiffani Thiessen) discuss their upcoming case as they enter into an elevator, which inevitably stops. In drops the body of a maintenance man and a hundred or so CG bats, which begin a voracious assault on the duo.

Barry and Pam are never seen again. Neither is the law firm. Or the elevator.

Connections to the first film are tenuous, mostly because it wastes such an inordinate amount of time on jibber jabber and no time on establishing elements. Some see this direct-to-video sequel with the production values of a TV show as a prequel. Others claim it’s concurrent. You can even the make the case it’s a sequel.

See, the first series entry took place inside a bar called the Titty Twister. It was blown up at the end of the original Dawn. If it’s a sequel, the Twister is being rebuilt because it’s a tenth of the size it was previously. As a prequel? It’s still undergoing construction. Concurrent? Well, good luck.

The Twister isn’t much of an issue unless you’re the type that has to link these films together. As a location, it’s only in one scene. In total, Dawn 2 only has five locations, and that’s counting the elevator. Robert Patrick leads a slim cast that ends up in the midst of vampire attacks as they try and pick off a Mexican bank. One of their own was bitten by vampire Danny Trejo, although another member picks up a one night stand that becomes part of a bat assault too. Why that’s necessary is anyone’s guess.

A stock score backs most of the action, which generally comes across as unpleasant, sans the horror elements. Cinematography is often off the wall or goofy for the sake of it. The camera is placed on a spinning fan, inside the cardboard mouth of a vampire as it bites, inside skulls, or on the back of someone doing push-ups. If it sounds disorienting, it is. Dawn 2 is trying to compensate for bottom tier production values.

Narrative structure doesn’t care to explain why, after being transformed into blood suckers, the bank robbers still carry on their mission as if nothing has changed. It’s clear they want the money from the safe, but drag along Robert Patrick’s character for no given reason. As mind-numbingly stupid as they are, the vamps could easily transform into more nimble killer bats, yet instead, choose to keep their human form during a parking lot stand-off. One bat is established as a killer, so why not four? It probably cost more for bat props than it did for plastic fangs and contacts, so that’s what we get. 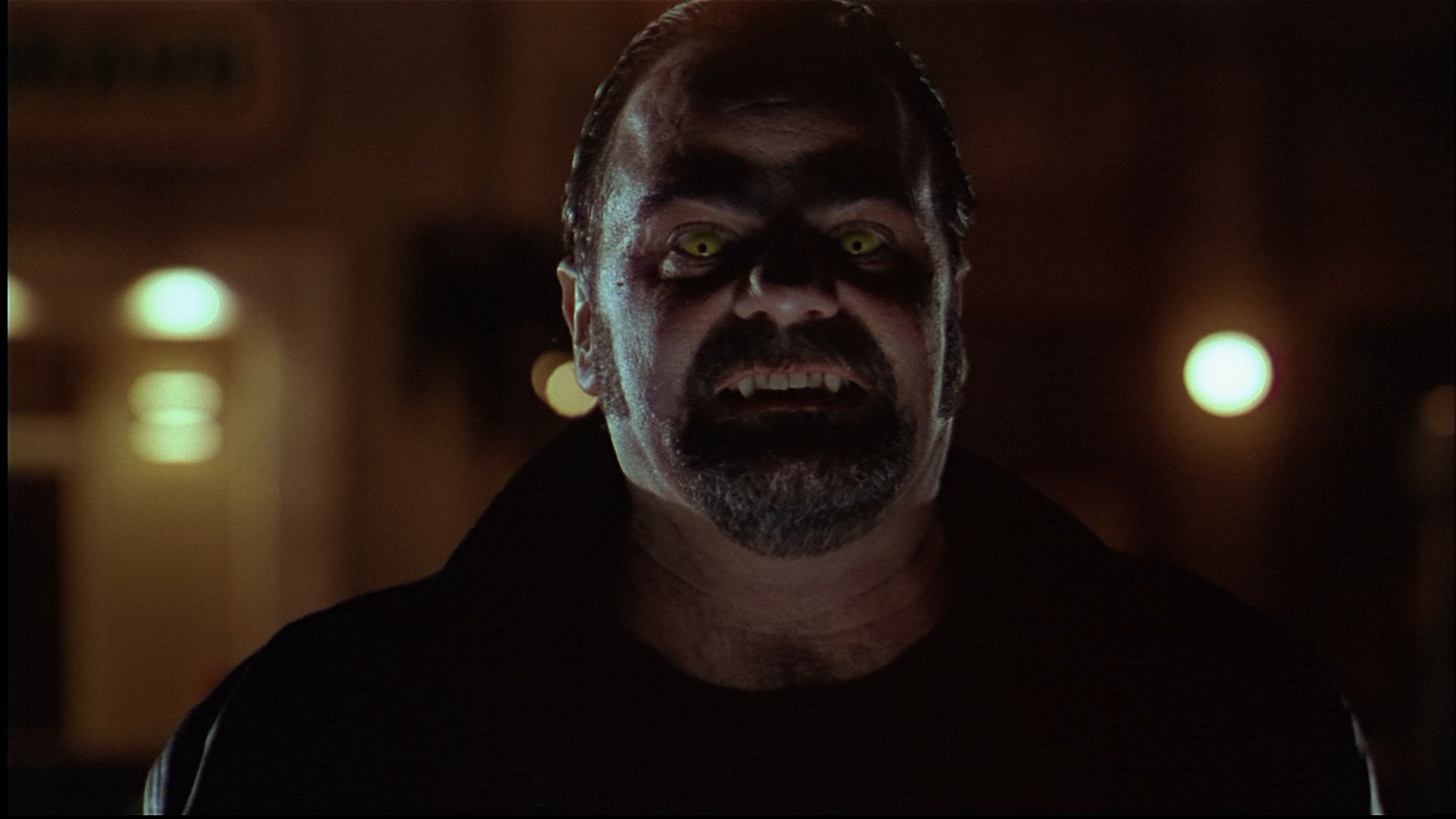 Echo Bridge doesn’t treat this sequel kindly (not that anyone will blame them), issuing the feature on a single disc with three other Dusk Till Dawn features. One thing is apparent from the opening moments: A drastic loss of resolution. The transfer reads 1080p yet barely cracks a standard DVD level of sharpness. Even a low grade film stock will produce elements of note. There’s no trick to the photography causing such inadequate visuals.

Compression is an odd beast too, sticking it to the grain structure with a mighty bitrate during static dialogue, then for some reason, dropping to single digits when it’s needed the most. A sequence shot in tear gas wherein the entire image is cloaked in smoke is a debacle of banding, noise, and artifacts. Subtle movements will reveal smearing, and faster motion will send the transfer into a tizzy of blocking.

Mild highlights include minimal facial detail so you’ll know something is being rendered at a basic level. Black levels seem to have their stuff in order for the first half before muddying into mush in the back half. All of the material shot in the bank loses visual appeal with dull gray backing an already lacking contrast. Early moments following Robert Patrick’s character are so tinted, there’s not a hint of white left in the frame. It’s been baked orange.

You can’t expect much from a late ’90s video sequel, certainly not a lavish special edition or restoration. As it stands, Dawn 2 is passable in terms of the print. There’s no damage. When issues are exacerbated by an encode, that’s when you can’t lower your expectations enough.

Released at a time when VHS was still poking around, the original mix didn’t expand beyond stereo. Neither does this Blu-ray. A DTS-HD 2.0 mix will work with a bit of spacing. Incoming bats will split the sides, and gunfire will mix it up a bit even if the effect is minimal. Stray vehicles may make themselves distinctive elements from time to time, a rare highlight.

Usually, the quickie score will sit behind the action enough as to be unrecognizable. Little balance has been applied, although dialogue remains perky. No signs of fading or age have crept in over time, so if nothing else, the elements are in peak condition.

Extras? Nothing, unless you count the pack as a whole a bonus.