Stephen King’s novels have been adapted into films more than any other living author. Pet Sematary is one of King’s creepier original concepts and that mood translates very well to the big screen in this adaptation. The core of the story is built around the idea of an Indian burial ground that can bring the dead back to life. As there always is in tales of horror, there’s a catch and price that has to be paid for such an unnatural act. The cautionary tale of death and resurrection, released as a big-budget Hollywood production in 1989, still remains an impressively scary movie to the jaded audiences of today. It’s the perfect viewing treat for the upcoming Halloween holiday.

The story begins with the Creeds, a seemingly ordinary family moving from Chicago to rural Maine. Louis and Rachel and their two small children, Ellie and Gage, along with the family’s cat, Church, present the perfect picture of domestic bliss as Louis begins his new job as a doctor. They quickly notice though the palpable presence of a weird pet cemetery, located near their new home.

We are then introduced to their neighbor, Jud Crandall, superbly played by Fred Gwynne of Munsters’ fame. It’s his tour de force performance as the elderly neighbor and friend that separates Pet Sematary from horror schlock. Everything the character says is spoken with a conviction and honesty in that rural Maine drawl, which makes the audience want to believe the events in Pet Sematary could possibly happen.

The direction is sure-handed and steady as the opening act lays the seeds for later developments. Once Jud becomes close with Louis, he introduces the family to the nearby pet cemetery and its history. What he neglects to first mention is that an Indian burial ground exists close to the cemetery. When the family’s cat suddenly dies, Jud suggests to Louis a way of bringing the cat back to life, to spare Ellie’s feelings. Louis as a modern man of science is skeptical but goes along with the idea. Church the dead cat does come back from being buried, but it’s immediately obvious there is a horrible price. The pet looks the same, but it comes back evil for the lack of a better term.

The first question after seeing the cat rise from the dead springs up to Louis immediately. If the burial ground can bring animals back to life, has anyone tried it with a human? I won’t spoil further plot developments but the story proceeds in a predictable but entertaining direction from that question. What keeps the movie descending into cheesiness are the remarkably great performances from the child actors, playing a wide range of emotions. The little boy playing Gage Creed has a critical role in the plot and he helps sell the horrible events that take place. The second half of the movie is very effective as a straight horror vehicle, with eerie FX and a creepy atmosphere. 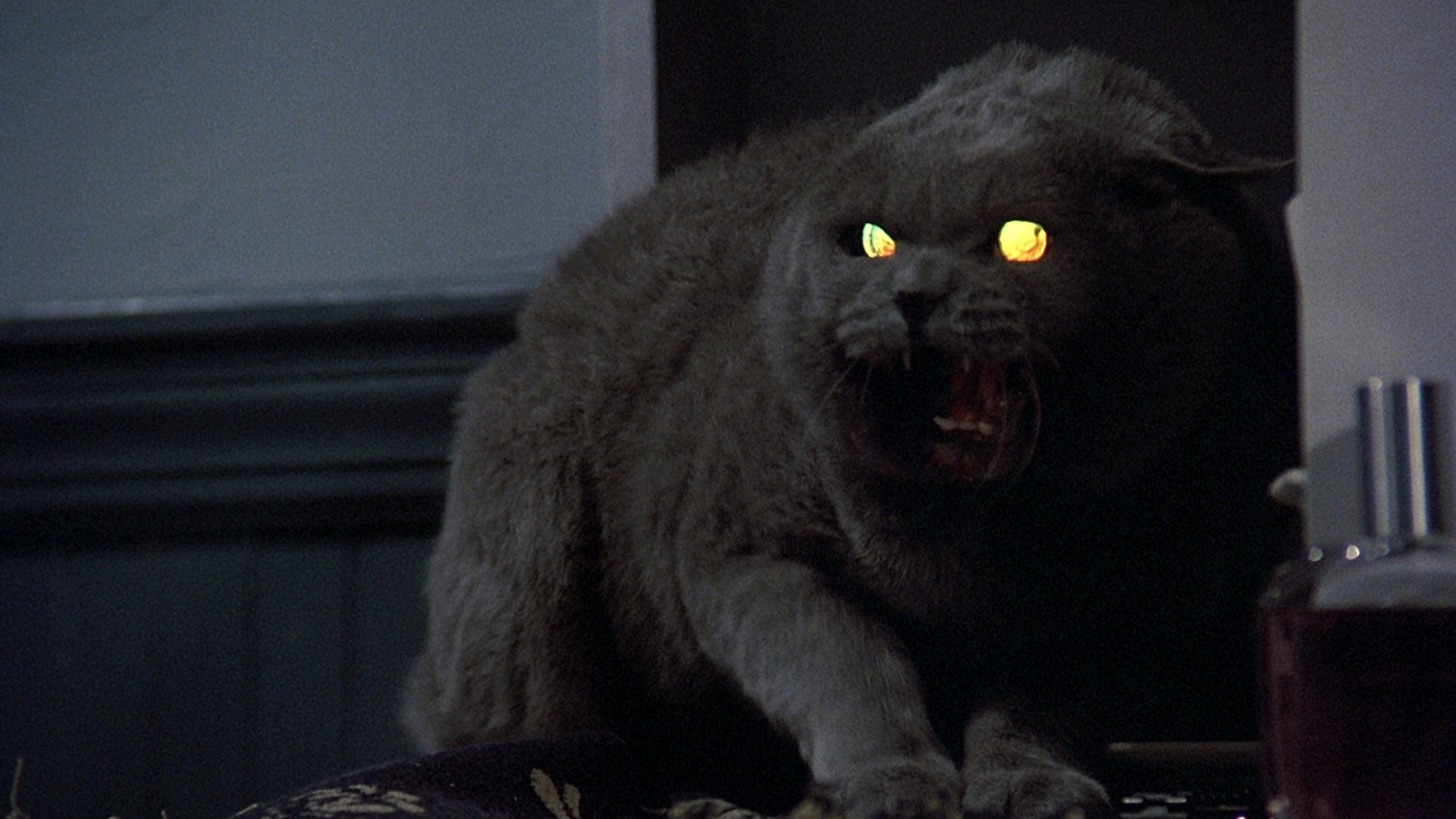 When so many classic catalog movies get shabby treatment on Blu-ray, Pet Sematary has received a stellar transfer and treatment from Paramount. It runs 102 minutes on a BD-50, encoded in AVC at an average video bitrate of 31.99 Mbps. Presented at its expected aspect ratio of 1.78:1, the 1080p picture looks derived from the same master made for the 2006 DVD. That’s a good thing, as it was created from quality film elements without much, if any, digital processing. The video encode itself is exemplary and retains every pixel of information possible from the negative.

Taken from a master in pristine shape, the film here hardly shows its age. Clean as a whistle from print defects or anomalies, what is left is pure unadulterated film without any trace of sharpening or filtering. It’s a very film-like transfer that retains the slight grain structure the movie should display. The image retains a moderate sharpness that only goes truly soft in a flashback sequence shot with a soft-focus. Resolution and overall level of detail is solidly average to above average, except for a couple of FX shots. This is not a film where oodles of high-frequency information is visible all the time, it simply wasn’t shot to be razor-sharp except in the tightest of shots like extreme close-ups.

Particularly pleasing are the natural contrast levels and a conservative color timing on display. Flesh-tones are a healthy pink instead of the revisionist orange and teal of modern horror films. That’s not to say the primary colors are not fully saturated, the backwoods of Maine never looked so inviting as they do on this BD. Black levels, key to a horror movie where important scenes take place in the dark or at night, are pitch-perfect with deep, inky blacks. There is not a hint of black crush or lost shadow detail evident in the picture.

On some level, the transfer on this Blu-ray might be too good. It does reveal a deficiency to the make-up and FX work involving the recurring ghost character, Pascow. The FX used for his appearances look cheap and gimmicky on Blu-ray, something I hadn’t noticed on lesser home video formats. But, I will accept that one failing, for the rest of the benefits this type of wonderful picture quality provides to the movie’s experience.

Pet Sematary features a strong 5.1 DTS-HD MA soundtrack, especially for a catalog property that dates back to 1989. Fidelity and dynamic range are both quite good and in no way betray the film’s age. At one point a phone is ringing and I really believed my actual phone had started ringing as I watched, it sounding so realistic from the soundtrack.

The 5.1 mix is very active across the front soundstage. Trucks rumble by the Creeds’ house with regularity in the film and pan across the room with convincing authenticity. There are a handful of isolated directional cues from the rear surround channels, which effectively heighten the scary atmosphere. Pet Sematary is a genuinely creepy movie and this soundtrack greatly enhances that creepiness, from the haunting score by Elliot Goldenthal to the eerie noises of the Indian burial ground. The sound design is not quite on par with modern 5.1 mixes. One would probably not use it for demo purposes, but the sound is excellent overall.

Paramount has thankfully included all the supplements from the special edition DVD, released in 2006. That includes three featurettes in standard-definition and a solo commentary from the movie’s director, Mary Lambert. While it’s not an extravagant assortment of extras, they are all competently made and interesting for fans.

Commentary – A solo effort by Mary Lambert as she discusses the film and her affection for the horror genre over the course of the movie. It’s funny and engaging as she discusses Pet Sematary’s development and background. There is very good information detailing the casting process and why certain actors were chosen for their roles. As always with these solo commentaries, there are brief pauses where the person runs out of things to say.

Stephen King Territory (13:09 in SD) – An essential featurette that interviews Stephen King himself, as he discusses the original inspiration for the idea and specific setting of Pet Sematary. If you could watch only one special feature from this BD, this would be it. Fans of the novel will like it as much as the people who’ve only seen the movie.

The Characters (12:51 in SD) – Several actors discuss their roles in the film. This is more studio fluff than a coherent examination of the characters, but you do get some interesting nuggets of information from the various actors about the process they went through on Pet Sematary.

Filming The Horror (10:26 in SD) – Cast and crew discuss the more technical aspects of filming Pet Sematary. Particularly relevant is how they reveal certain FX were filmed, like the cat’s eyes glowing in the dark.