The third season of Hung takes place a few months after the events of season two. For their economic survival, middle-aged Ray (Thomas Jane) and his suburban pimp Tanya (Jane Adams) decide to open a “Wellness Center for Women.” It’s a thinly-veiled front to drum up clients for the real business of prostituting Ray out to wealthy women.

The business starts booming when old rival Lenore (Rebecca Creskoff) shows up, demanding a cut since she claims it was her idea. Rebuffed by them, Lenore goes out and finds her own male hooker, a naive 25-year-old named Jason, to start her own gigolo service. How Ray handles the presence of competition and this new rival is the main theme of season three.

The crux of the show is the honest friendship between Ray and Tanya, as they strive to overcome the problems their business poses to them and their loved ones. The basic premise of the series is not always believable, but it makes for comedic gold at times. Hung is at its best when Ray is put into troublesome spots and Tanya has to bail him out of it somehow. There is a hilarious episode where they find out one of their clients is an actual cop, and they have to talk her out of arresting Ray for missing a scheduled date.

The show gets less entertaining as it moves into Ray’s family drama with his ex-wife Jessica (Anne Heche) and their kids. The humor is much better in Hung’s third season than the inserted attempts at emotional sincerity and honesty. Tanya gets her own problems to deal with in the form of Charlie (Lenny James), a pimp she bails out of jail who lives under house arrest at her place. Jane Adams is wonderful in the role, as her character grounds the show from becoming a loopy comedic mess.

This is the final season of Hung, as HBO canceled the series after ratings took a dive. Fans do get closure to the big story-lines of season three, though the alternate ending presented on this set as an extra gives a huge hint as to where the story might have gone, if there was another season. The third season of Hung is funny if one can ignore some of the more melodramatic touches to the plot. It won’t be for everyone with the frequent scenes of sex and nudity, mostly featuring Ray with his female clients. 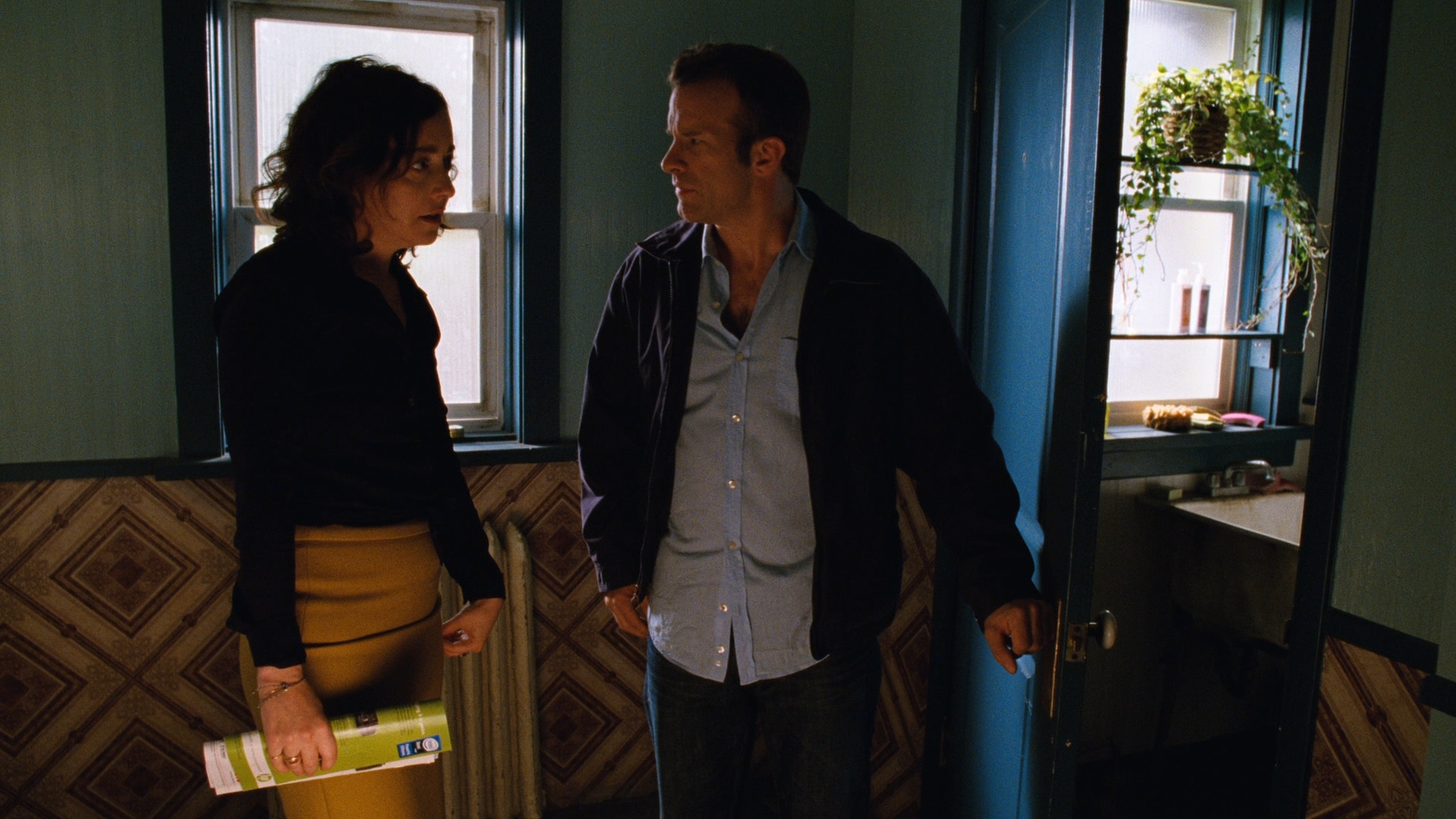 Hung is shot on 35mm film and and retains a fine layer of cinematic grain in this set. The ten episodes of season three are divided equally over 2 BD-50s, in an AVC video encode that averages nearly 30 Mbps. Those parameters produce a detailed image that replicate the show on Blu-ray as closely as the format allows, with nary an artifact in sight.

Presented at 1.78:1 in 1080p, the video looks fresh and sharp with just the slightest hint of grittiness. Bedroom scenes are an exception, as most of them are filmed in lower light and exhibit a touch of black crush with coarser grain.

Some minor ringing is apparent, only visible in general due to the excellent contrast and evenly-saturated color palette. The image is fairly sharp and demonstrates very good detail in close-ups, though longer shots introduce a slight softness on occasion. Hung’s picture quality is not perfect but better than the typical modern television series on Blu-ray. HBO has once again given their programming top-notch treatment on BD from a technical perspective.

Hung: The Complete Third Season features a solid 5.1 DTS-HD MA soundtrack. Dialog is always crystal-clear and the music is integrated into the sound design very well. Bass output is shockingly good for a television series but HBO shows tend to have excellent production values on par with theatrical features. There is a moderate amount of surround activity in the rear channels, but there aren’t many opportunities for localized, discrete sound effects in the dramedy.

At first blush the extra features for season three of Hung seem loaded, but most of them are short and inconsequential except for the audio commentaries. The commentaries don’t provide a huge amount of insight into the show, preferring to fill the viewer in on production details more than anything else. It’s disappointing none of the cast could provide a commentary.

15 minutes of deleted scenes in 1080i, with introductions to each scene by the creators. Watching them is actually worth it, as the deleted scenes delve into material that probably shouldn’t have been cut in the first place from the show.

A music video in 1080i, from the two actors that play Ray’s children on the show.

Hung: Inside The Series (1080i) – Running shy of 15 minutes, this is a brief overview of the season that relies heavily on excerpted scenes to tell its narrative.

Alternate Ending to the final episode (1080p) – A very brief scene that hints very strongly in what direction the show would have taken, if it had continued for a fourth season. Fans will definitely want to watch this particular extra.

A note on the screen shots: Some technical bumps caused some flubs in the timing. Take these shots as they are sans time stamps.