Oh, 2008. How can we forget you? After all, you’re the year that let Indiana Jones escape a nuclear blast inside a fridge, spawning an internet meme for the ages and a new slogan: “Nuke the fridge.”

It’s also a time when the franchise was allowed to play as loose as it wanted with its own internal logic. Crystal Skull is dominated by magnetism, and not just between the leads. The skull in question attracts everything metallic, yet ignores guns, artifacts, or other objects like, oh, a tank. Skimpy logic will win Skull few followers.

Somewhere in this mixture lies inter dimensional beings. People tend to be flaky about that. Indiana Jones’ tradition lies in the mystique of religious artifacts, not just the fantastic. Aliens in Indiana Jones is sort of like a Ghostbusters sequel where the crew battles the spirit of Hitler. It makes sense in the scheme of things – after all, it would be a ghost – but misses the charms and kookiness of the concept.

With time distance between its original release, there’s the ability to step back and reevaluate Crystal Skull and its mixture. In a lot of ways, it’s more traditionalist than Temple of Doom, sending Indy back to school for a brief chat before globe-trotting on his quest. It matters. The slew of jungle chases, campus rides, and furious zombie natives has the inherent charm, just mixed with stupid. It’s hard to imagine anyone looking at Shia LaBeouf cascading the tree tops with monkeys as series progression, no matter the connection to the B-level serials the franchise was founded to honor.

Crystal Skull adapts to a time frame, an aged Harrison Ford grizzled as the elder Jones, now a war veteran. One can easily place Jones in any part of the military, going off on his own accord in the middle of a warzone to bash Germans while still seeking treasure. In actuality, that’s probably the movie that should have been produced. Instead, this trot through the ’50s era brings in Cold War fears, with a name-selling traitor played by Ray Winstone and Fonzie look-a-like Mutt Williams, played by LaBeouf.

Elements of this decorated series are here. Ford has lost little to age, and his first meeting with this film’s titled treasure is pure magic. He has all the wonder he did back in his prime, if not more. Jones is doubly thrilled that he can still complete these finds, let alone hold them in his hand. After surviving a nuke, it’s undoubtedly a thrill to even be alive to see them.

Visual effects artistry and its progression balances out, giving Lucas and Spielberg a little too much freedom in their quest for thrills, but the heart remains. Spirited chases are no less challenging or thrilling when backed by a green screen even if the smarter audiences of today can pick out those shots. Crystal Skull is a mixture of moments where talented filmmakers understand their base, and those same filmmakers trying too hard to recapture cinematic magic. 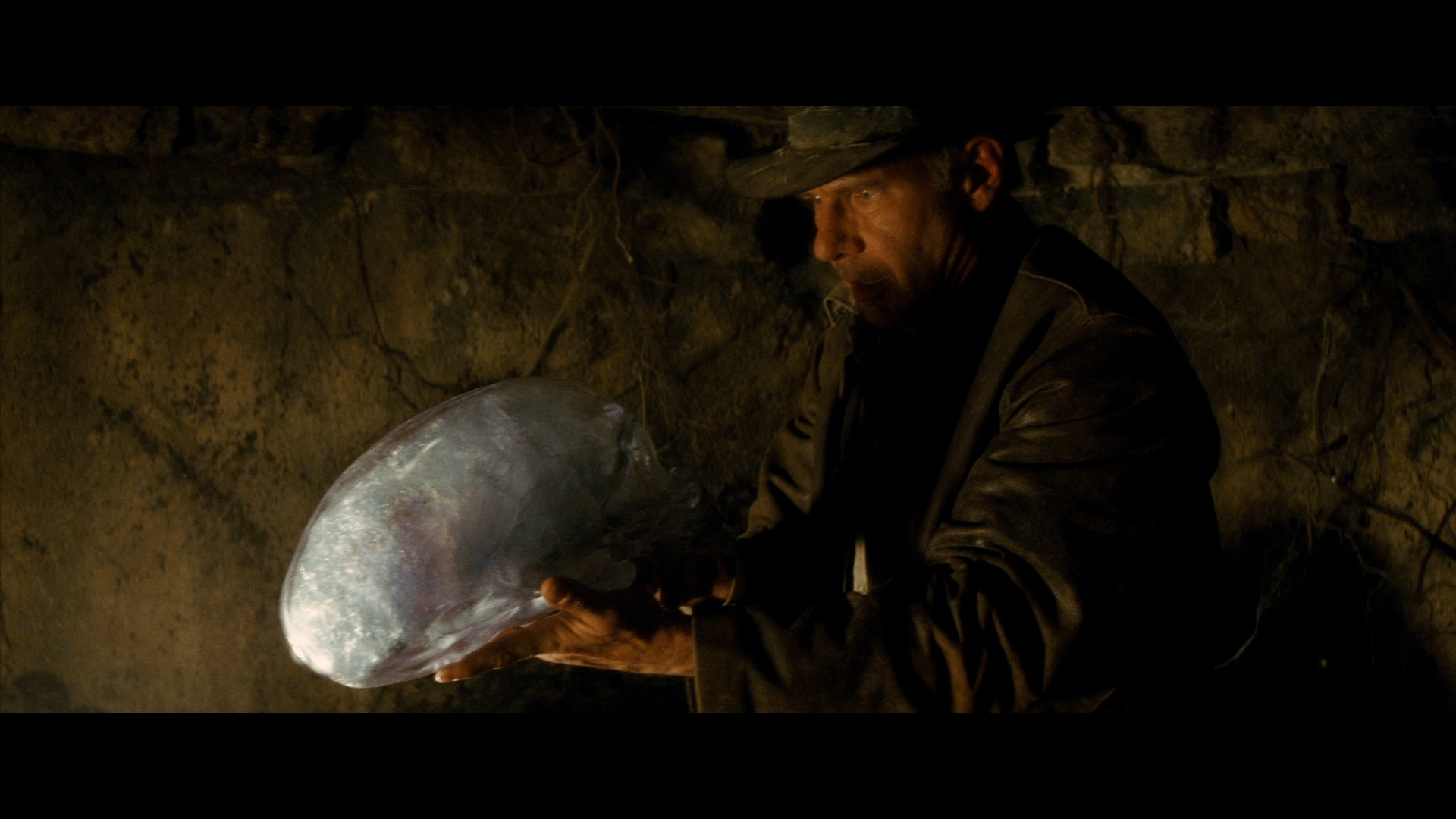 Despite the pervasiveness of digital effects, Crystal Skull was captured on film, and Paramount doesn’t do anything apparent to alter their original, stand alone 2008 disc release. It has different disc art to match the others in the Blu-ray collection, but the encode looks identical. That’s fine, as this one has aged gracefully enough to warrant a pass. Most four year-old encodes don’t.

In an effort to dim down many of the traits of modern cameras, lenses, and everything else, Crystal Skull clamps down to match the vibe (visually of course) of the earlier ’80s classics. The effect is mostly a damper on otherwise crisp photography, an overzealous contrast, blinding lighting, and filters combining for a unique visual structure, if not one that matches up.

It’s funny going back into Raiders now that it’s been gracefully mastered and comparing. Intent delivers the original film a bit baked in terms of flesh tones, a look that in addition to the orange/teal style, matches Crystal Skull. But, in a somewhat ironic twist, the dizzying selection of filters poised over Skull makes Raiders tighter, sharper, and better textured.

That’s not to say there’s nothing to like in Skull, because there’s plenty. A generous helping of resolution still provides striking images, if not the tightest available in close. Brilliant jungle scenery and outstanding waterfalls are jaw dropping in their breadth of impact. Dazzling black levels are a boon to the depth, and despite how much fine detail the contrast may be munching on, it creates a display full of dimensionality.

Grain is of minimal consequence, boosting itself during one of the final shots of Irina (Cate Blanchett) that’s already swarming with special effects. Paramount’s encode is on guard to match the bump the best it can, and given the level of motion in the shot, few will even notice. For the most part, Skull is clean enough to pass for digital, and sharp enough to cater to film followers.

Crystal Skull is the recipient of a DTS-HD jump start from its intro that bellows ’50s rock and racing teens through the soundfield. Effective tracking is a hallmark of the audio mixes, even down to separating voice work. Indiana Jones in any form on Blu-ray loves to break free of the center channel. This final feature is no exception.

Bloated with action scenes, few will go by without any highlights, and it’s impressive how the design mimics previous entries in terms of punches and gunfire. It’s a strive for franchise authenticity. Elements come together in a fun way, especially the waterfall drop. The first hits the LFE with a short burst, the second becomes fiercer, and the third dominates the room as few discs are capable of. It’s a sense of increased danger, even without the visuals.

The key chase scene through the jungle springs to life with a rocker launcher blast that will battle any action film on record. Vehicles slam into each other with a hearty boom, and engines capture the full expanse of the stereos. Trees and branches splinter while rocks are tossed to the sides, all before a big damn ant attack captures the insects swarming with a creepy audio cue.

Skull closes on enormity, a ship lifting up and dropping a mass of land back down before water rushes in to cover the entire area. From the moments the engines light up, it’s a bass-a-thon, all with the assist of debris falling around the fleeing characters. Marvelous.

Crystal Skull comes packaged with the series, leaving the bonus features on a later disc. Contained here are three trailers. The score reflects that.