Marketing departments love romance. James Cameron knows this, so he pitched his uber-expensive retelling of the Titanic disaster as a love story, and the execs ate it up. Two hundred million dollars crafted colossal interiors, sinking sets, miniatures, full scale replicas, all for the sake of realism. Then Cameron added fake people who were never on the boat.

The base logic goes something like this: The people who lived or died are either not interesting enough or unworthy of the screen, so audiences need insufferable villains and 90-minutes of class warfare to sell the tragic nature of the event pre-iceberg. It’s terribly illogical, and audiences would grasp how idiotic the idea was when the concept was replicated for Pearl Harbor a few years later. Movie audiences are smarter than we give them credit for once they learn their lesson.

Titanic is and always will be a marvel. The sense of enormous scale, the crippling emotional body count, and unimaginable destruction is unreachable in terms of fictional storytelling. This event happened, and for all of the jokes about how someone knows how it will end, it does end. It ends after a solid hour of complete immersion in a historical context that makes it merciful to watch, not experience first hand.

All of those characters, including a revolting Billy Zane who kidnaps children to get his way (as if his wife-beating, wife shooting, and criminal set ups weren’t enough) are merely there to lead this story through. In many ways, they feel like storytellers. The scene in which Rose (Kate Winslet) stops a desperate escape to speak with a mourning designer Thomas Andrews (Victor Garber) has those sensibilities. It’s insight into the mind of the person who feels responsible. Those scenes legitimize what is, in reality, a dopey romance with actors still a few years from their prime.

In some way, the script expects the viewer to care about Rose and her new found love Jack (Leonardo DiCaprio) as people leap to their death, drown, freeze, and fall while hitting propellers. Characters are not strong so much as they are forced, and it remains Titanic’s grand downfall. We should care because Rose wants to break free from her stuffy, spoiled lifestyle in first class. We should like Jack because he’s seen the world, scrounged, and survived. “Should” is the key word.

They’re not unlikeable, just useless ancillary edition to a cast nearing 3,000 people. Rose is far more interesting in her framework as an elder reciting her story to a group of hopeful Titanic treasure hunters. Through this, you feel Cameron’s own enthusiasm that would only blossom as time passed. Narrative framing is smart too, dropping exposition to get it out of the way naturally so when the inevitable collision happens, the focus is all disaster.

The sea faring nightmare itself trumps just about any other put to screen, fictional or otherwise. As awe-inspiring as it may be to see John Cusak or Bruce Willis save the day from dead civilizations or asteroids, Titanic isn’t dumb enough to oversell itself. Each progression of the sinking is signaled with a more alarming sign, increased panic, and world class sound design. The ship at times seems to be mourning its own demise as it creaks and bows under pressure. As such, even if the stilted romance has lose you, a shattering, dying vessel and those souls taken with it have the ability to draw the real emotions. 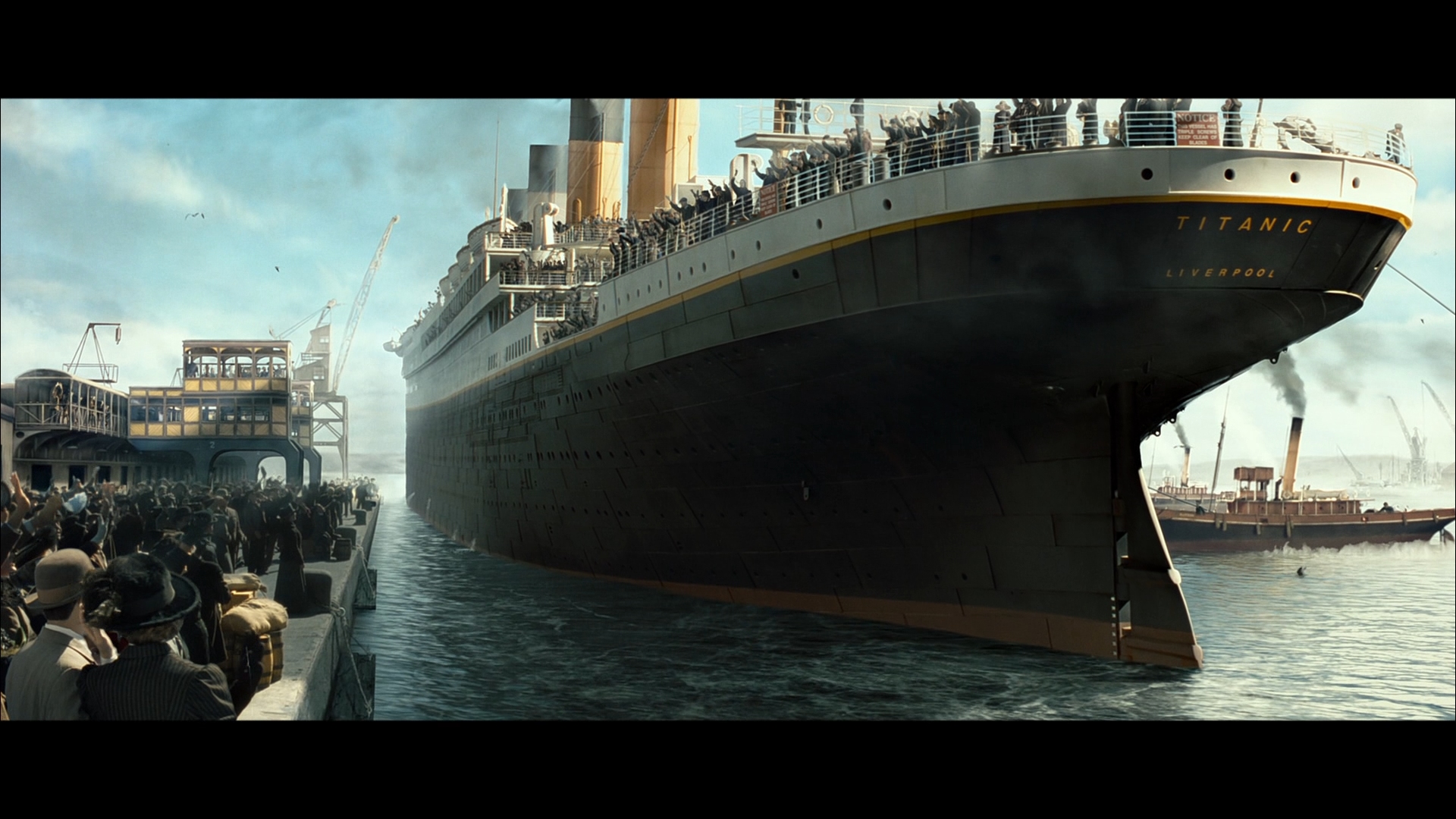 Technology, in a variety of types, rules James Cameron’s life if his public appearances are anything to consider. In steps this Blu-ray, likely created with the top tier of materials and exquisite resolution, and probably a few buzzwords marketing will love. Whatever the case may be, it looks phenomenal.

Somewhat ironically, the only thing marring this feature is technology. Those now vintage (a scary word when applied to a 15-year gap) computer effects cast a glow that reveals their source is less than modern. Robotic animations are impossible to miss during digital ship pans, and black levels will waver when digital effects are necessary. In many ways, you can say this source is so pristine, these elements stick out only because they can. It’s not technology so much as it is two conflicting generations of progress.

Paramount manages to squeeze the entire movie in a 2.35:1 ratio on a single disc, two if you’re viewing the 3D version at 1.77:1. For 2D, that extra disc isn’t needed, and the encode is impressive when you consider length. The video itself -sans audio- is gifted 33GB of space, a bit over 10GB an hour. Grain is preserved with a keen eye towards keeping it a background element, preserving texture. Spikes are noticeable only when put against the haze of smoke during dining or party sessions, and bit rates rise to compensate. Whether that boost in available space hides their flaws is something else all together.

Tremendous fine detail is on display across the breadth of the film, close-ups consistently dazzling in their ability to refine facial texture. Depth is afforded a range that the best of Hollywood can produce, great blacks and bright contrast mixing with the detail to craft a catalog title worthy of sitting alongside today’s high-end features. There is one shot – one single shot – that displays anything below the level of film, and it’s a zoom of Rose as she is seated for lunch. For whatever reason, the images muddies, grain is removed, and noise reduction has been applied in dramatic quantities. That shot is less than 15-seconds.

Color timing changes are almost an inevitable occurrence with the tools available. Nothing egregious seems to have been done to Titanic, just minor tweaks, saturation, and a slight teal push. It’s mostly insignificant in the face of everything else this disc is doing right. All is being sourced from a pristine print that doesn’t display any damage or anomalies. Whether or not memories are fuzzy and as cliché as it may be, Titanic almost certainly looks more striking here than it did during those long months of exhibitions back in ’97 and ’98.

You’re not listening to Titanic for anything prior to the iceberg collision. Admit it, you know it’s true. If that’s your prerogative, skipping right to the later chapters, you’re actually missing out on some showcase moments this DTS-HD mix will pump out generously. Engines firing up are awe-inspiring in their simulated size, crowds cheering the ill-fated voyagers are spread wide into the surrounds, and splashing water or wind will focus its attention into the spaced channels.

Then, the ship begins to meet its fate, the collision signaling an outrageously effective display of rushing water, popping electricity, panicked passengers, and a creaking boat. The latter is arguably the most impressive display of heft, hitting the LFE in protest to the incoming water. It’s an element that makes Roses’ journey through the underbelly to rescue Jack so effective. Walls are closing in without any needed visual element.

Smokestacks slam into the water as the hull splinters, a gruesome feeling knowing people were under it. Cracking in half, the ship puts up a fight, with wood snapping through the surrounds until the back half settles into the water with a mighty blow. Nothing here should disappoint, if only because it never lets up. Not an element is missed and nothing is out of balance. It’s a film worth cranking a few notches higher to help set additional scale. Titanic is more effective when pushed through at high volume.

Three commentaries are available on the first disc, all of them recorded in 2005. James Cameron goes solo, cast and crew chat it up on the second, while a historical perspective is given from Don Lynch & Ken Marshall.

Disc two fires off with documentaries, the first of which carries the title Reflections on Titanic. You’ll spend an hour on this fun look back, although a lot of it is general praise without much substance. What’s great here is The Final Word, where James Cameron and Titanic historians set out to recreate the disaster to decipher exactly how it went down . Much debating ensues over 90-minutes.

Deleted scenes are fully completed, running for an hour with an optional commentary. A section on the disc labeled production covers general behind-the-scenes material, construction, Cameron’s deep dive to the site, videomatics, and a video shot by the crew. Archives houses the marketing side along with Celine Dion’s overplayed music video and parodies.