As told by Finn (Sam Spruel sporting a killer haircut), evil witch Ravenna had unleashed her plague across many lands for years. Her blackened spoils cast famine, darkness, and plague across the people, and yet Snow White’s (Kristen Stewart) father falls for her gaze in desperation for romance. One wonders how news of soul crushing witches and dead landscapes doesn’t travel to other kingdoms even in the earliest days of communication. Seems relevant.

This is a war torn world, one that cannot be derided for its design, but it’s a free-for-all when dissecting its stupidity. Ravenna (Charlize Theron) sucks the age from young girls by transferring their halitosis, eats raw animal organs to signify her evil, and recites known fairy tale lines. “Mirror, mirror on the wall,” only works when the mirror is, well, on the wall. In this interpretation, it takes on the image of a cloudy figure and stands in front of her. It’s more, “Mirror, mirror standing in front of me,” but that doesn’t have the kick needed for a trailer.

Ravenna is sadistic, and for the first act, her command over a dark army gives her a bitchy, enjoyable quality. She has enslaved Snow White in a single room for most of her childhood until rage unleashes this princess from her cell. There, Snow White wanders into the dark forest – named because everything sounds evil when it has dark in front of it – and Huntsman begins to wander.

Ravenna is pushed into a rear element of the narrative, her fits of jealous, sometimes comical rage less frequent as Snow White begins a test of survival. Our heroine, sporting the most varied singular facial expression, meets the Huntsman (Chris Hemsworth), childhood friends, and the seven dwarves. The latter are brought to life through impressive camera trickery and make-up, all of them cast as full size actors such as Nick Frost and Bob Hoskins. The work is exceptional, as is everything visual in this film.

Huntsman struggles with its plot device. Snow White’s encounters strengthen a resolve we already know she has, while her predictable relationship with the Huntsman is fodder for the typical mismatched buddy/romance routine. Certain scenes are brought into question, including a lavish action sequence inside a village with an all-female populace. Snow White learns what the presence of Ravenna has done to these outlying villages, a plight that only adds to an evil the audience is presented earlier.

Eventually, Snow White will break into the castle that once held her, pulling a Joan of Arc in a full scale, frontal assault. Bodies fly and ancillary characters are dropped with little emotional toll. Somehow, Snow White escapes this castle wide battle and finds the one area where no evil guards are present: a direct staircase to Ravenna’s throne room. Security delegation was not the witches’ strong suit. From there, it’s fantasy material we’ve seen before (memories of Willow come running back), including a needless hallway battle that involves shards of black crystal sprouting to life for a burst of 3D before the viewers head home. Huntsman has plenty to look at it, so it’s a shame the substance isn’t there. 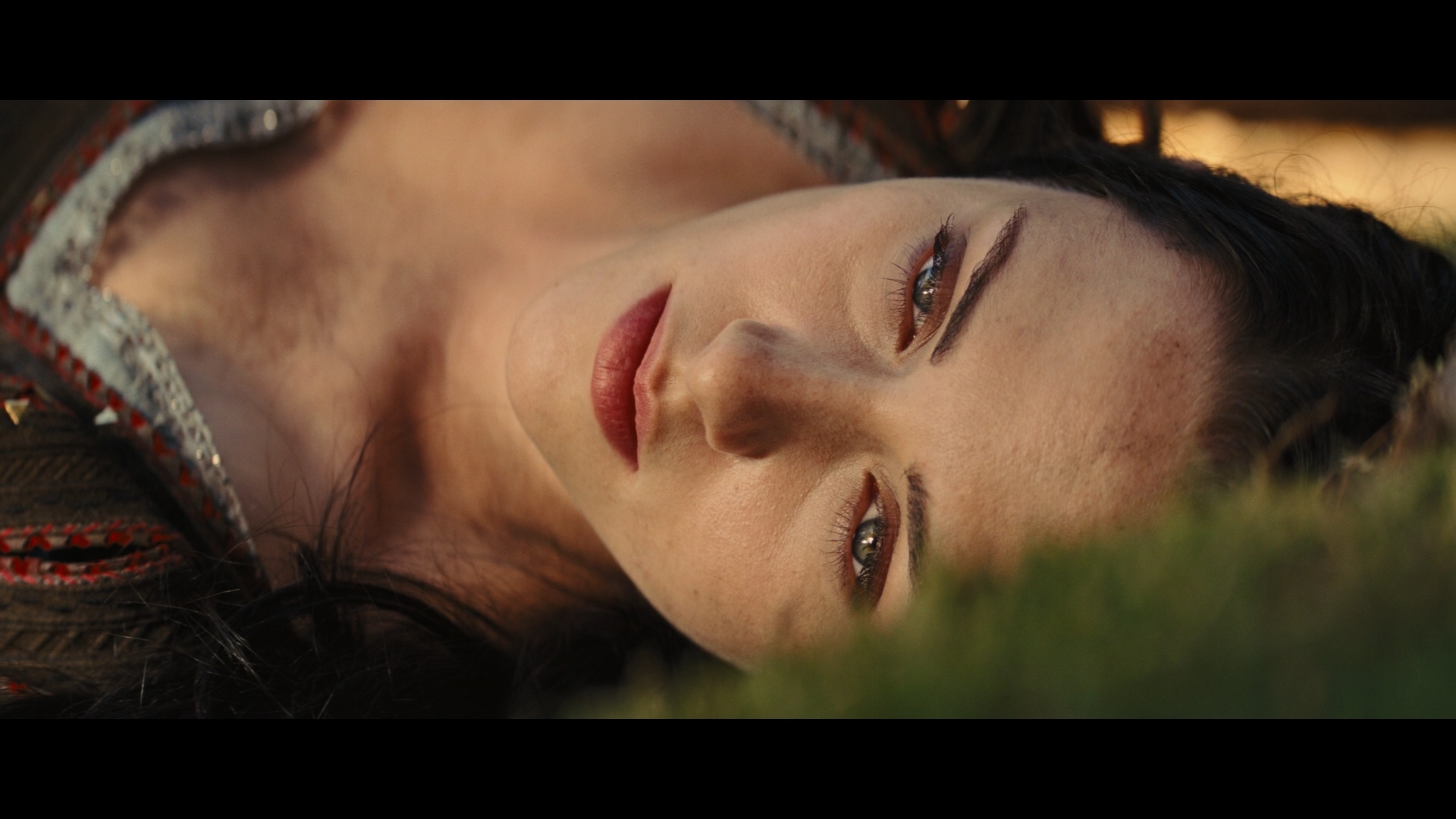 Generally captured on film with a spectacular eye for detail and sharpness, Huntsman soars via Universal’s generous AVC encode. The film stock adds a non-problematic layer of grain that handles the weight of the scale and intensity of the close-ups. Only one instance of mushy noise was considered during the viewing, the rest as high-end as Hollywood can be. The film looks expensive for more than it’s set and costume work.

Somewhat typical color timing leads to dual distinct palettes, the bland blues that signify repression in the Kingdom and burnt oranges meant to show the candlelight’s effects on the characters. There’s one reprieve and that’s the dwarven forest, a superior, lush land of greenery, flowers, and often creepy creatures. To be fair, even those scenes without this screen-busting saturation are quite vivid, given a color density that makes even the blandest of hues striking. It’s done in a way, in conjunction with rich blacks and precise contrast, that gives these downtrodden elements weight.

Huntsman has its share of visual effects, none that get in the way of the alluring detail. If anything, the Blu-ray serves as a canvas to show off this level of work. A troll battle involves multiple close-ups with a CG creature that fills the frame with rocky virtual skin. This film is so in tune with its need to be a showcase, even a newborn baby’s face is loaded with identifiable facial detail.

There are faltering moments where focus isn’t in its prime or lens effects warp that definition out of view. Nothing is perfect after all. The key here is that none of this lies at the hand of the encode; it’s part of the photography, and in the scale of this film, it’s minor. There’s too much praise and little time to nitpick.

Huntsman’s DTS-HD outing loves ominous drops of the low-end. Something devious happens on screen and the subwoofer begins a slow boil before reaching a hearty peak. It’s a great example of how something simple changes the mood of a scene.

Snow White becomes lost in the dark forest, landing into a bubble of gas that causes hallucinations. Suddenly, objects spring to life, leaves creek around the soundfield, and voices swirl. It’s the highlight of the first act for sure, and it sets the stage for the troll attack that follows. The beast swings his arms which travel through the stereos or use those two additional surrounds via 7.1 to pan around the back. Clearly, with his size, the LFE material isn’t light. Each footstep is a powerhouse.

Battle scenes become heightened by the crowds, clanging swords, yelling, battle cries, and catapults making this one a shoe-in for potential demo material. The mix does a lot right as far as the non-action scenes go too, with forests coming to life via light weather effects and wildlife calls. It’s a solid, stable, and consistent mix worth a listen.

If for some reason you want more of this film, Universal doubles this one up with an extended cut in addition to the theatrical version. From there, a commentary is offered by director Rupert Sanders, visual effects supervisor Cedric Nicolas-Troya, and co-editor Neil Smith.

Reinventing the Fairy Tale is an short look at the story development, followed by a four-piece section titled Citizens of the Kingdom. Here you’ll rundown the cast, and learn how the dwarves were realized. Magic of Snow White and the Huntsman is dedicated to visual effects and their approach. Around the Kingdom offers five interactive panoramas of specific set locations. U-Control picture-in-picture copies most of the above material during the feature.

D-Box, Second Screen, and BD-Live bandwidth wasting are in tow to round this one off.