Five-Year Engagement is the example that from here on out will show how the romantic comedy can survive while maintaining the standard genre timings. In other words, Tom (Jason Segel) and Violet (Emily Blunt) break up 80-minutes in, they travel cross-country to meet each other when they realize the mistake, and we close on a wedding. It’s exactly what you’re taught when writing one of these.

It survives because it does a lot right, namely a consistent stream of laughs. Few are gut-busting, most are chuckle worthy, and you’ll never look at carrots the same way again. There’s also a cast that spans generations, cultures, and thematic styles. Most importantly, Segel and Blunt are fantastic across from one another, playing on each others strengths and building their relationship from a New Years Eve party.

Pushed into an engagement, Tom and Violet find themselves caught up in the reality of life. Violet’s psychology work takes off, although in Michigan, miles away from Tom’s home base in San Francisco. He’s a chef, and fine dining around a college campus isn’t a business to be in. Tom loses himself while staying supportive, taking up a disturbing interest in hunting that covers the home in pelts, and Tom in a kooky beard.

All of this boils under the surface. Tom struggles to scrape the ice off his car windows before heading to work at a small sandwich shop as Violet breaks into the University program. Breaking points involve stale donuts and a one-off drunken night of partying that can only lead to where you expect it to… like an amputated toe. Weirder things have undoubtedly separated couples over time.

Engagement has likeability written all over it, a stock of secondary players hamming it up either racially or via archetypes. Chris Pratt’s abrasive Alex is nothing if not a clone of American Pie’s Stiffler, but you believe that Segel’s downtrodden, quiet Tom needs that type of back-up. Although Alex takes his wingman role and shuffles Tom back into Violet’s arms, it’s done in a “guy” way. They’re not sitting around, moping over relationships so much as it’s a spontaneous passing of the torch.

Everyone integrates in that way, natural and perky. Rarely does the script find itself losing an eye for comedy, as those often depressed, darkened, lonely nights have something to brighten themselves. Engagement never loses sight of those comedic roots even as its narrative shifts into a heavier dramatic tone.

Sure, the film is crude. The R rating is there for a reason, and yet, it feels like a part of these characters. They’re rough around the edges, totally flawed, and part of each others lives because they somehow piece together. It’s smart writing even as someone jerks off a carrot with ranch dip landing on their face. Oh, that ruined the carrot, didn’t it? At least you know what you’re getting into. 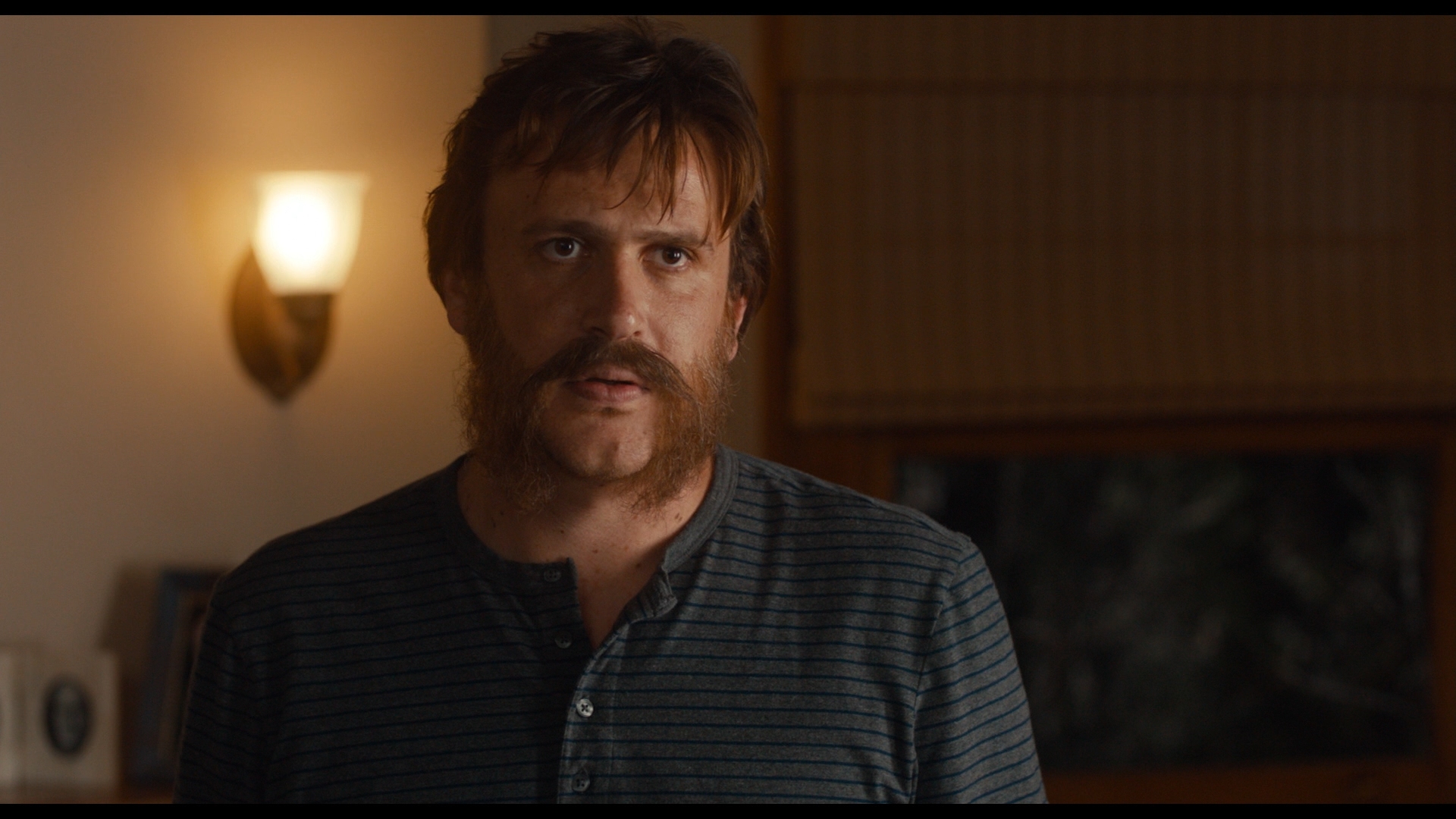 Five-Year Engagement opens on shots of San Francisco that appear like stock footage out of the early ’90s. They’re stuck in a haze, a little foggy against the nighttime lights, and certainly low resolution. Mercifully, only one other shot will appear with the same attributes. The rest is a pleasing digital offering with plentiful texture.

Hardly a shot will go by with noticeable noise, backdrops clean and nights pure. Black levels maintain a stable level of integrity which isn’t superior in any way, although there’s enough heft on their end to solve any depth issues. They even hold off on crushing shadow detail, so kudos to the omnipotent black levels.

The color base is geared for warmth, and thankfully without an adverse effect on flesh tones or contrast. The snowy Michigan winters offer superior brightness while maintaining a steady look as the transition from different climates begins to impact the storyline. Contrast is always heavy without being blotchy, and primaries have a stable push. It’s all around appealing.

There’s still texture to speak of, close-ups admirable in their quest to showcase resolution and tight focus. Clothing is well refined, exteriors are sharp, and medium shots hold firm. An off green screen effect may have a detrimental bump to the above, but it’s quick to pass. Smoothness won’t ruin this precision comedy.

Dry DTS-HD offerings are always a downer, even for a dialogue driven comedy. There’s no energy here to speak of, from the potential of whipping winds during the winter to bustling bars or parties. Music doesn’t swell with much of any power, and dialogue is strict in its adherence to the center channel.

This one is mixed a bit low too, so have no fear in turning this one up a few notches. A special feature details a deleted scene involving an explosion which might have been the sole highlight if it stayed in the theatrical cut. Opportunities are never capitalized on, and while nothing here screams inadequate, you always have to ask for a little something to take notice of.

Jammed with bonuses, this disc keeps on giving after a commentary throws director Nicholas Stoller, Jason Segel, Emily Blunt, Chris Pratt, Alison Brie, and producer Rodney Rothman together. A making of splits into two parts for a total runtime just over 40-minutes. Two location shoots – one being the explosion mentioned earlier – are detailed in shorter pieces. A dozen deleted scenes run longer than the making-of at 45-minutes. Nineteen extended/alternate sequences are even lengthier at 46-minutes.

A hilarious gag reel is a must see, and the line-o-rama keeps on giving. Experiment-o-rama is all the ad lib from the psychology students as they dream up oddball things to do with their subjects. Weird Winton is a deleted scene (maybe?) of Rhys Ifans acting like he’s high. Gonorrhea Trouble tells the story of a scene that never found a clean take because no one could stop laughing as they shot it. Top Chef is an in-character piece as Chris Pratt’s character takes on the reality show. Universal still has room to stuff some BD-Live materials on here, although as usual, it’s not worth the time or the bandwidth. Everything else is, including the unrated extended cut.