Aliens are coming to Earth because humanity thought it would be a great idea to poke a potentially uncivilized, warlike species with a metaphoric stick. So they get annoyed, traveling 60 trillion or so light years dodging asteroids, suns, planets, and the whole nine yards, but inadvertently knock their communications out, colliding with a satellite parading around Earth.

We, the audience who chose to sit through Battleship, have to assume said aliens are just annoyed with us. After all, they send a fleet of five entire ships, not the armada, and spend most of their time in the sun of Hawaii -their greatest weakness- repairing their communications. See, even extraterrestrials have AT&T on their home planet.

One can suppose these creatures (which on the outside appear ripped from Microsoft’s Halo video game franchise) chose Hawaii because that’s where Earth’s signal originated. If someone is poking you with a stick, you rip their arm off and the poking stops. But, one assumes with the infinite, water-based technology at their disposal, they might have concluded the bright light would go against their very existence. The sunlight blinds them, so maybe their invasion is better aimed at Barrow, Alaska where the sun doesn’t rise for two months out of the year.

But no, that can’t happen, because then rookie Navy dude Alex Hopper (Taylor Kitsch, also now known as box office poison) wouldn’t be able to shoot them. He’s trapped inside their shield generator because apparently the aliens planned ahead. Poorly mind you as their assault comes during military war games, but they planned nonetheless.

Battleship screams America, with hot women who love chicken burritos, Liam Neeson, and retired Navy veterans who pose on their battleship as if they’re readying an album cover. In other words, it’s screaming for us, while the rest of the world laughs. You can’t excuse a decommissioned, museum tourist attraction not only working as if it never stopped, but still containing live ammunition ready for battle. Greatest. Tourist trap. Ever.

The film limps around, making you wonder why they licensed the board game for a brain dead alien invasion flick. You almost have to root for Battleship just to see the follow-up, Scrabble, wherein rogue letters blocks are radiated and trample Cleveland. Battleship the board game historians can probably make a correction, but through the years and electronic variations, the game never once sprouted pointy, goatee’d humanoids. In this adaptation, you’re not sinking just a ship so much as you are your dignity by allowing yourself to subjected to this material.

It’s a world where bullets ping off alien armor but a knee to the face by a depressed, mechanically-legged soldier sends them reeling. It’s a world where unseen alien metals, the type the periodic table needs adjusted for, is pierced by 60-year old, unguided naval equipment. And, quite honestly, Battleship’s pervasive patriotism is offensive to those that fought for the right to pan this movie. They took down hundreds of ships in their service. These morons struggle to measure up to five peg throwing (seriously) alien ships who can (almost) master interstellar travel, but don’t plan cell phone service once they get here. 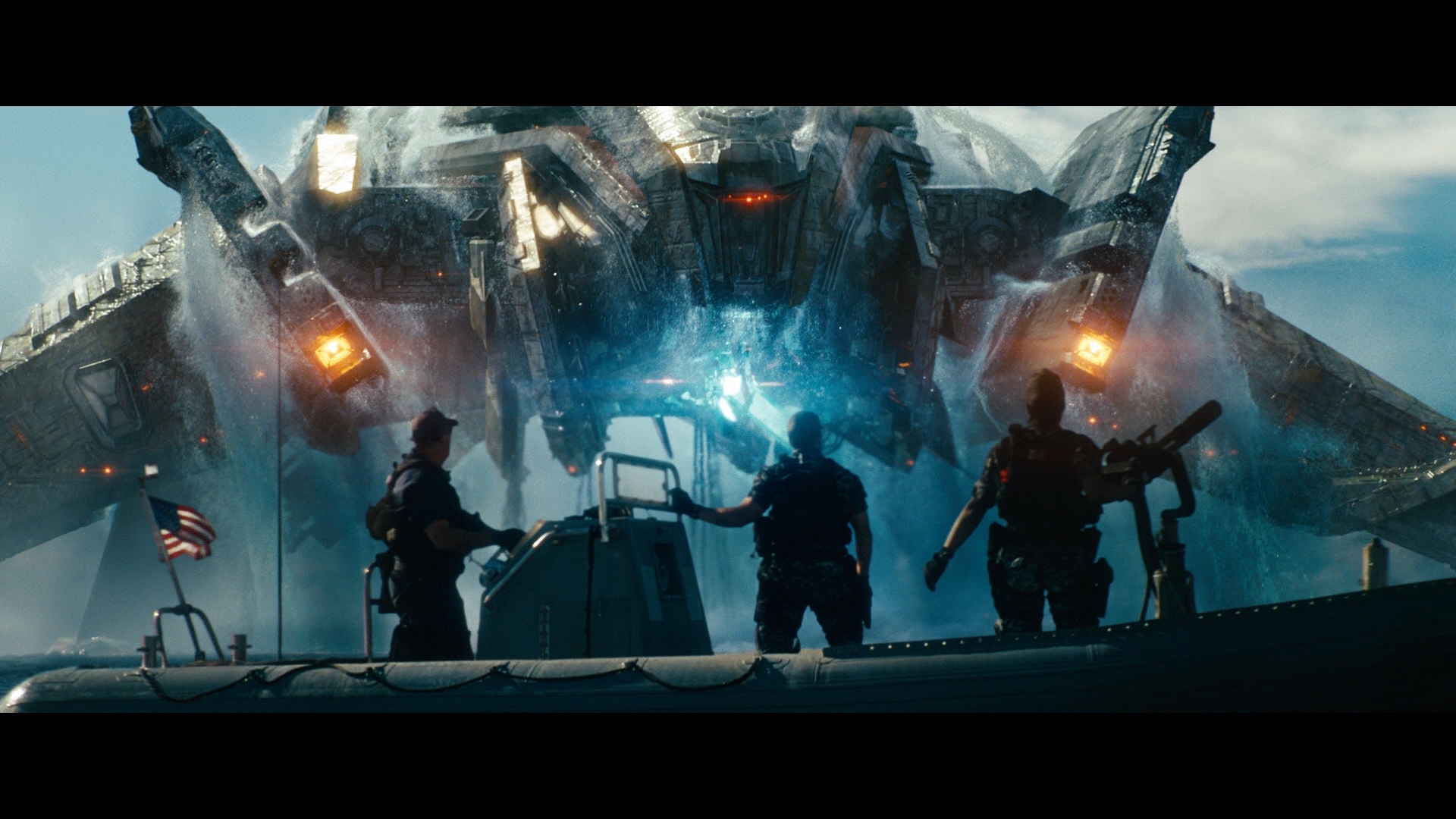 Chilled American steel and bronzed seafaring flesh tones create Battleship’s palette, an all too familiar mixing of color that dominates the feature. Only the scenes on land, backed by lush Hawaii landscapes will escape the density of those blue hues, replaced by striking greenery that gives the movie something to fight for. We can’t lose such an HD visual showcase, now can we?

Cinematography veers sharp, most of the ship footage outstanding in resolving the minutiae even as the camera pans around. Little is lost unless the film stock shifts due to a decision to briefly use stock footage for a few shots at sea. Most of the panoramas count as a brief tour. There’s enough detail to gain that much knowledge in a flash edit. However, this doesn’t keep pace, dimming the close-ups on occasion, and once in an extended shot inside a cabin.

Most of the time though, Battleship is staggering in its definition, zoning in on a focus that is unrelenting in its ability to siphon texture. Tension rises on sweaty faces, every ounce of fear visible along with pores, scars, cuts, and hair. Even the digital aliens have their moments, armor appearing scraped and battered from (what one assumes) was a previous home planet scuffle.

Vivid contrast from a plot device sun bears down on every struggle – sans the nighttime one, clearly. Even then, images don’t lose their heft. They’re saved by consistently applied black levels that care for shadow details and deliver the dimensionality necessary. An imperceptible grain structure doesn’t find itself caught in any abnormalities, and Universal’s encode handles whatever is thrown at it.

Once Battleship starts, it doesn’t stop. Even sequences on the bridge of the ship simply amaze with electronic equipment sputtering out of control, or the sound of the engines lightly hitting the subwoofer. That’s all dialogue fodder.

Missiles are fired off with precision tracking, panning to the sides or rolling into the rears as need be. Communication signals are sent into space with a stellar burst of energy, and the highs stick to a specific channel based on the visual location. Incoming aliens defy all logic and shatter the sound barrier in space as they pass by, making their entrance in grand fashion.

Destruction is mesmerizing, scattered parts joined with the impact of the explosions for a definitive end to human or unnamed space creature vehicles. Splashing down into the water generates a dominating, fierce sense of weight that makes those moments pure spectacle. Any one of Battleship’s numerous action scenes is pure reference.

Battleship’s alternate ending was never completed, so it’s included here in pre-visualization form as a start to the bonus features. All Access with Director Peter Berg is U-Control evolved to eliminate the needless user input. Special features simply play in conjunction with the movie, although they’re not accessible anywhere else on the disc.

A tour of the USS Missouri details functions and sights without having to leave home. Preparing for Battle brings together all of the CEO and producer talking heads who seem genuinely oblivious to the idiocy of the adaptation, all while shamelessly hocking the board game. All Hands on Deck is more ego stroking as it runs down the cast. Commander Peter is much the same, just focused on Berg.

Engage in Battle is a short featurette showcasing the difficulty of water-based filmmaking. A look into ILM’s new water systems are detailed in the next piece that focuses entirely on the CG work. Second screen, D-Box, and BD-Live bring an end to this one.