With 12 districts and 24 teenagers battling for survival under what amounts to a loose “peace” treaty, Hunger Games is a crowded film. Instantaneously as the 74th games are ushered in, seven are killed. They had no names; they’re statistics.

The film hinges on Katness Everdeen (Jennifer Lawrence) as she fights for her district, a coal mining town with a disastrous past and conditions that fail to rise above squallier. She becomes the base of the film, a character of few words who fights an established regime indirectly. Words are few, her attitude tense but without Rambo-esque qualities. Katness is just as fearful as the rest as she stands at the ready.

Two are plucked from each District via a lottery, Katness joined by Peeta Mellark (Josh Hutcherson) from their 12th District homes. For as uniquely sounding as Katness is, “Peeta” comes across a desperation for innovation or a mockery of animal rights group. He’s a toughie though, although in a role reversal, a step down from the fire fueled (literally) Katness. Peeta is all technique and no flash, the two teaming up via their smarts and ingenuity.

That makes them top tier opponents, if only because their competition is composed of dolts. As a grouping of rival Districts shoos Katness up a tree, they come to an agreement to out-wait her. They set up camp with a fire, and you have to wonder why they don’t burn the tree instead, or continue firing easily recoverable stray arrows. The team is wasting resources by camping out, not to mention failing to show any effect from their training phase.

It’s an hour before Hunger Games arrives on the field, a chance for the script to work through the world, its problems, and the process. War brought on the yearly games, which have apparently pushed out the Olympics in terms of scale and interest. Superstars are born from show, treated as reality contestants via smiling hosts and worldwide broadcasts. Any sense of aversion to the thought of children murdering for sport has been vanquished, undoubtedly via marketing.

In the know types will draw comparisons to Battle Royale, a controversial Japanese slaughter fest with a stronger edge and less focus on character. You can cue up Running Man if you so wish too. Hunger Games is decidedly more marketable though, preying on the teen genre via romance and working around the MPAA with indecipherable camera work. Fights happen, but they’re squished in the frame as the jumpy lens can’t hold still. A small pool of blood and ominous cannon fire signifies death.

The finale brings the story to a close as the remaining combatants (the number of which is unclear unless you’ve been counting) duke it out over a supply drop, as the Terror Dogs from Ghostbusters surround the kids. Despite the limited development of a villain – and one can make a case for there being numerous evils here – it’s a sequence strengthened by the two leads. Their turmoil, their heart, and determination is enough to rise over a sloppy, rushed romantic angle that doesn’t feel honest. 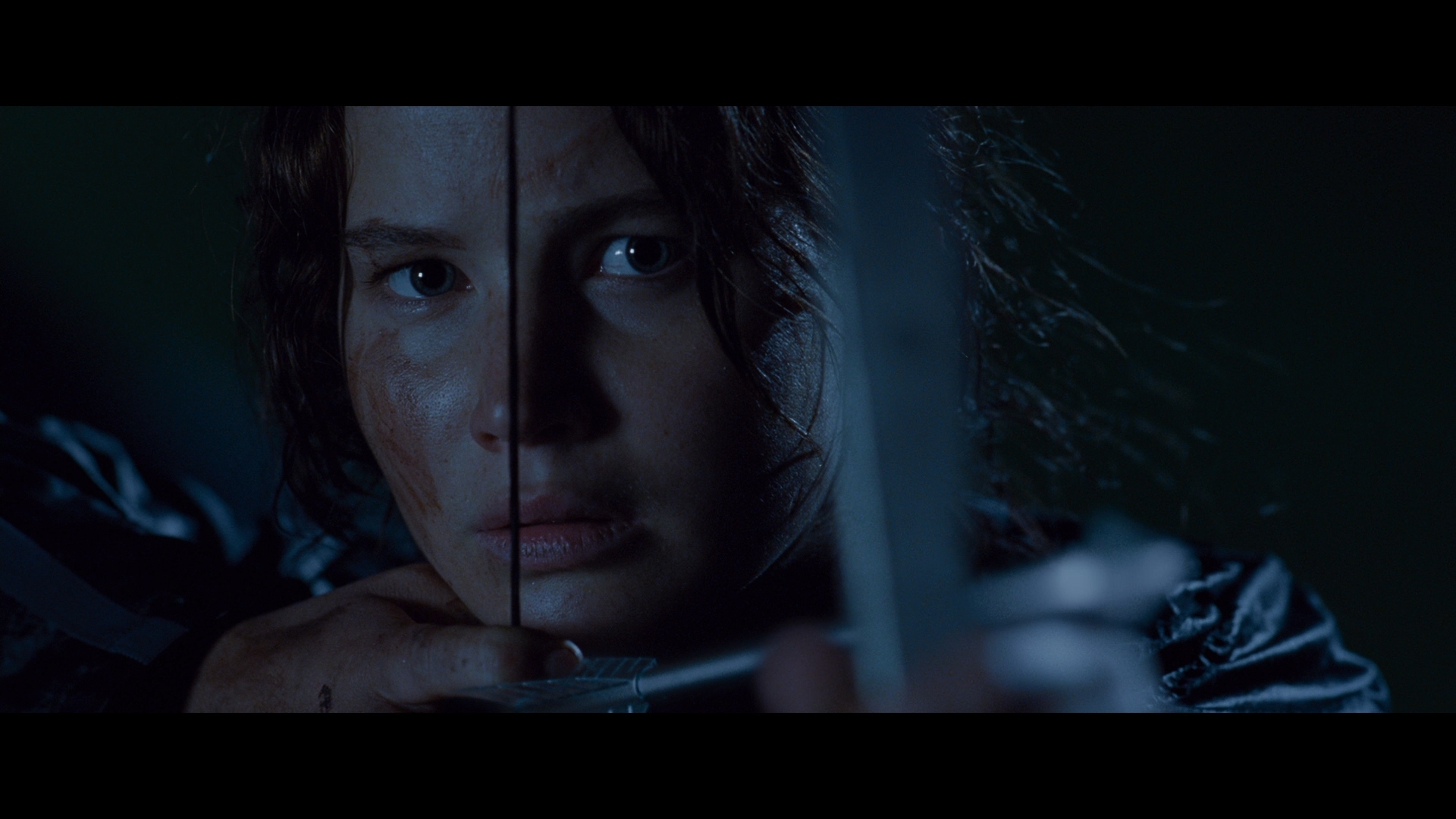 Hunger Games is brought to life via film and a precise Lionsgate encode. There’s little question the studio didn’t push for a pristine layer of definition, seen throughout the piece as compression sits in the background, out of sight. Concerns over grain spikes have more to do with the source photography than the Blu-ray encoding.

Still, regardless of origin, there are quirks that tend to bring this film down. Moments of glaring softness and smoothing combine to flatten out the image rather severely, and it cannot be called uncommon. Critical black levels are lacking needed density as night falls, keeping shadow detail firmly intact while washing out the screen.

Oddly, the world (via meticulous, unique designs) depicts a populace dressed in extravagant color, from clothing to wild makeup. Saturation doesn’t supersede mood though. Hunger Games pushes for a mixture of cool backgrounds and warm foregrounds, basic and all too familiar. Elements allowed to stand out include the lavish greens of the forests and heavy flesh tones. No doubt that combination can be striking.

The film blends special effects well, the resolution rarely betraying the brilliant cityscapes or the introductory stages. Even the interior of a floating train doesn’t lose out to the green screen scenery, core photography firm even as the false backdrop whips by. It’s impressive considering the amount of material happening at any one time, which makes some of the basic North Carolina footage a bit of an oddity when it appears clumsy.

An audio pleaser from the opening moments, the mix contained on this disc doesn’t miss anything. Katness’ world is one of nature, where birds chirp freely and insects call out. Whatever the case, there’s something going on in the rears, and with two added surrounds via 7.1, it feels wider with better scale.

The same goes for arenas or any large crowd scenario. Clapping, cheering, and other elements spread around. Authority figures send their voices out over PA systems that carry even into the far end of the deeply packed audience. Element balance is superb.

Action scenes are not high in number, but prolific when pushed. A forest fire is rich and dense, featuring thunderous LFE effects with constant precision with regards to the growing flame. Angered insects buzz around the soundfield, and government ships weigh heavy as their engines roar. An explosion of supplies offers the best heft, digging deep for a genuine room rocker, almost certainly the highlight.

It takes two discs to house all that the film has to offer, the first housing the movie only, while the second is given all the space for bonuses. The key here is The World is Watching, a two-hour marathon making-of split into eight parts. Despite the depth that goes far enough to cover how the PG-13 was possible, too much of this is self-congratulatory.

Game Maker speaks with author Susan Collins and her publisher regarding the book. Letters from the Rose Garden details letters Donald Sutherland wrote to Collins about his character. Controlling the Games looks at the design of the command center, the type of information that probably would have been great in the main making-of.

Director Gary Ross has a sit down with film critic Elvis Mitchell as they run through how it was adapted. Preparing for Games continues with Ross (briefly) as he details the adaptation process. Trailers and the entire propaganda film seen during the selection ceremony is included in full.