A Thousand Words introduces audiences to a tree, or rather a magic tree that loses leaves each time Jack McCall (Eddie Murphy) speaks. When the final leaf is removed from the tree, McCall will die.

That’s a problem as it would be for most people, but doubly so for McCall. He’s a publishing agent with a fast mouth and wasted words. If you can imagine Murphy’s Axel Foley character from Beverly Hills Cop in this situation, you can see how rapidly McCall dwindles in health and sees his mortality in a new light.

The film is played for laughs, and that’s probably a grievous mistake. Thousand Words must contrive itself at every turn, and by the third act’s dramatic, emotional highs, it’s exhausted the credible meaning. McCall isn’t inherently unlikable in his chatty state so much as he is self-centered. His abusive relationship with an office assistant (Clark Duke) is almost out of his character. The set up is a journey that takes McCall from one extreme to the next. At least, that was the intent.

So much of this film wanders aimlessly, seeking a gag where it has none or embarrassing the lead. Murphy’s desperation in regards to saving words leads to a ludicrous phone call with a publisher. He grabs an Austin Powers doll which repetitiously spews, “Yeah, baby” in answer to questions. No one on the other end find the accent odd, recognizes the character speech, or even finds the response in a professional setting odd. Worse, he continues to grab talking toys (all of which are found on one floor of the building, go figure), all with different voices up to Tony Montana in Scarface.

Further complicating tree matters is the physical connection. Gardeners water the plant, sending McCall into a heavy sweating session. That, or they spray poison on the branches, making the lead high. Wouldn’t you know it? Both of those instances happen to occur at crucial business meetings.

His personal life is affected too, wherein sympathy is all but removed from the character repertoire. Instead of sitting his wife down to explain the situation as she threatens divorce, he pulls out a chalkboard and sits his co-worker down instead. One conversation with his wife and this film doesn’t exist, so it struggles – desperately mind you – to work around that idiosyncrasy. The scripting solution is far from satisfactory.

In the third act, Thousand Words slows down. McCall is drowning in alcohol, blabbering on about not caring, and considering suicide by speaking. Tonal shifts are rarely this extreme or this heavy handed, but there’s an element here that feels marginally genuine. The situation calls for subtlety, and the first act over does it to make the book end seem more powerful, but in reality the situation is forced. 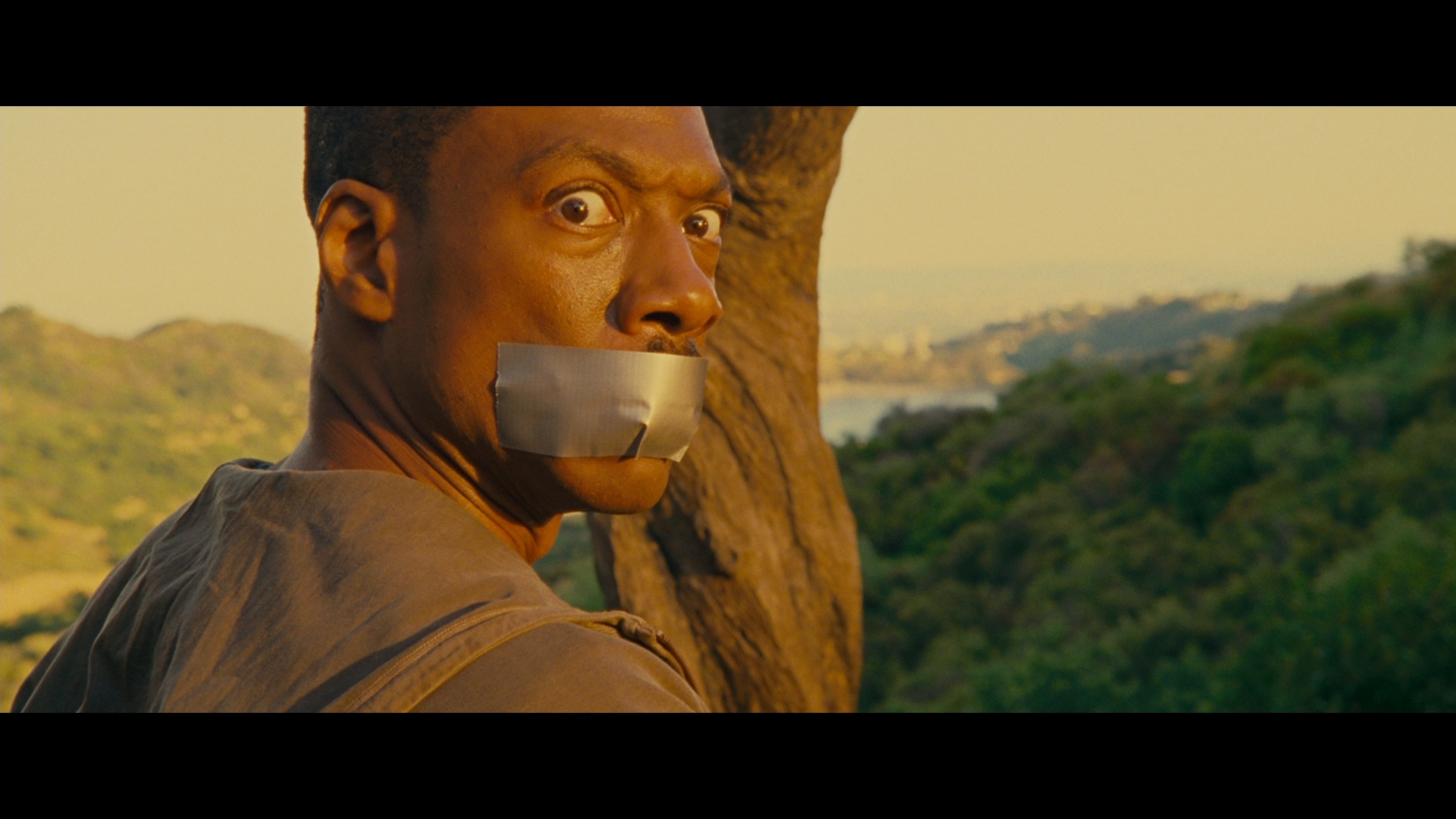 Paramount would likely rather forget this comedic box office collapse, indicated by holding the film back four years (it was filmed in 2008) and this mediocre transfer. Immediate concerns are raised over the amount of ringing that appears on even mildly contrasted edges. Medium and/or long shots rarely hold back from revealing halos, an issue more pervasive in the first third of the film, although squeezing into view on the back end too.

There’s also the grain structure which appears oddly murky and muddy for an encode featuring a substantial bitrate. This saps fine detail from the frame in a transfer that has some firm close-ups, if not much else. Despite the prevalence of facial detail, resolution feels stunted. The image isn’t as resolved as one would expect from a new release, four-year old film stock or not. Come to think of it, Thousand Words looks like a master that comes with age. That could explain away quite a bit.

Other problems? Black levels are offensively off, ruining the shock of McCall’s first encounter with the tree in his backyard. A nighttime sky – possibly a special effect to give his home a mountain-esque view – skews blue. There’s almost no black to speak of in the image. That’s a problem that will haunt this disc at various stages.

There’s another tier of complaints, although this is more to do with the source. Color timing is unappealing, drenched with warmth to the point that few other hues can escape. A trip to a meditation camp is so overheated, greens appear bronzed and flesh tones are ludicrously heavy. Contrast becomes clipped as whites are burned, flattening the video out, denying it of impact. It’s discs like this that give comedies a bad name in HD.

Directly dialogue driven, opportunities are sparse for this DTS-HD mix to work. The audio highlight will spring into action around 18-minutes in, a powerful earthquake that sprouts the magic tree from the ground. Activity in the LFE is powerful and weighted, enough to generate a rumble.

One other moment creating discussion material is a street crossing with a blind man. He doesn’t know that it’s the wrong time to cross, and wanders into traffic. There’s a pleasant split of the stereos and minimal panning front to back that places the scene in the midst of danger.

Dialogue takes a strict stance with regards to remaining centered, and balances well with those highlights.

Need further proof Paramount just wanted this one under the rug? It doesn’t even include a trailer for a bonus feature.