Hailed a masterpiece practically as soon as it was released, La Grande Illusion is Jean Renoir’s 1937 French classic. Nominally about a small group of French officers held in a World War I German prison camp, the movie is much more than a story about prisoners of war trying to escape from their situation.

The antiwar message is a strong theme running throughout the movie and says as much about the political environment of 1937 than simply the depicted events of World War I. But the movie goes far beyond that theme to explore class and national boundaries, within a complex web of humanity and loyalties beyond nationalism.

The narrative is largely focused on two French officers caught by the Germans in 1914, Captain de Boeldieu and Lieutenant Maréchal. Both are officers doing their best for France in the war, but they come from vastly different backgrounds and classes. Captain de Boeldieu is a member of the old French aristocracy, whereas Maréchal is from the working-class before the war started.

Both eventually end up together under the watchful eye of German Captain von Rauffenstein, after a series of escape attempts at the first prison camp end in failure. Much of La Grande Illusion was based off Renoir’s own experiences in World War I and his friends in the military, as he wistfully called it the “last gentleman’s war.” An obvious notion that sprung up after the horrors of World War II. Desperate to escape by this point, one of them makes a valiant sacrifice for the others to escape.

It’s here where the story reveals the vast differences in outlook between the classes of the time, and how it’s possible the two Captains have more in common than the two Frenchmen actually share. That is but one aspect of the subtle and varied themes laid out between the prisoners and the Germans. Renoir himself says the script was written to emphasize his belief in the equality and fraternity of men, showing the Germans were not unthinking monsters in the fight against the French.

La Grande Illusion is an important piece of cinematic history and it is almost a required watch for any serious film buff. Its universal themes are just as relevant today, told in a careful manner that rewards repeated viewings. The human drama that unfolds makes for a rich tapestry and why it’s still an essential film 75 years after it premiered. 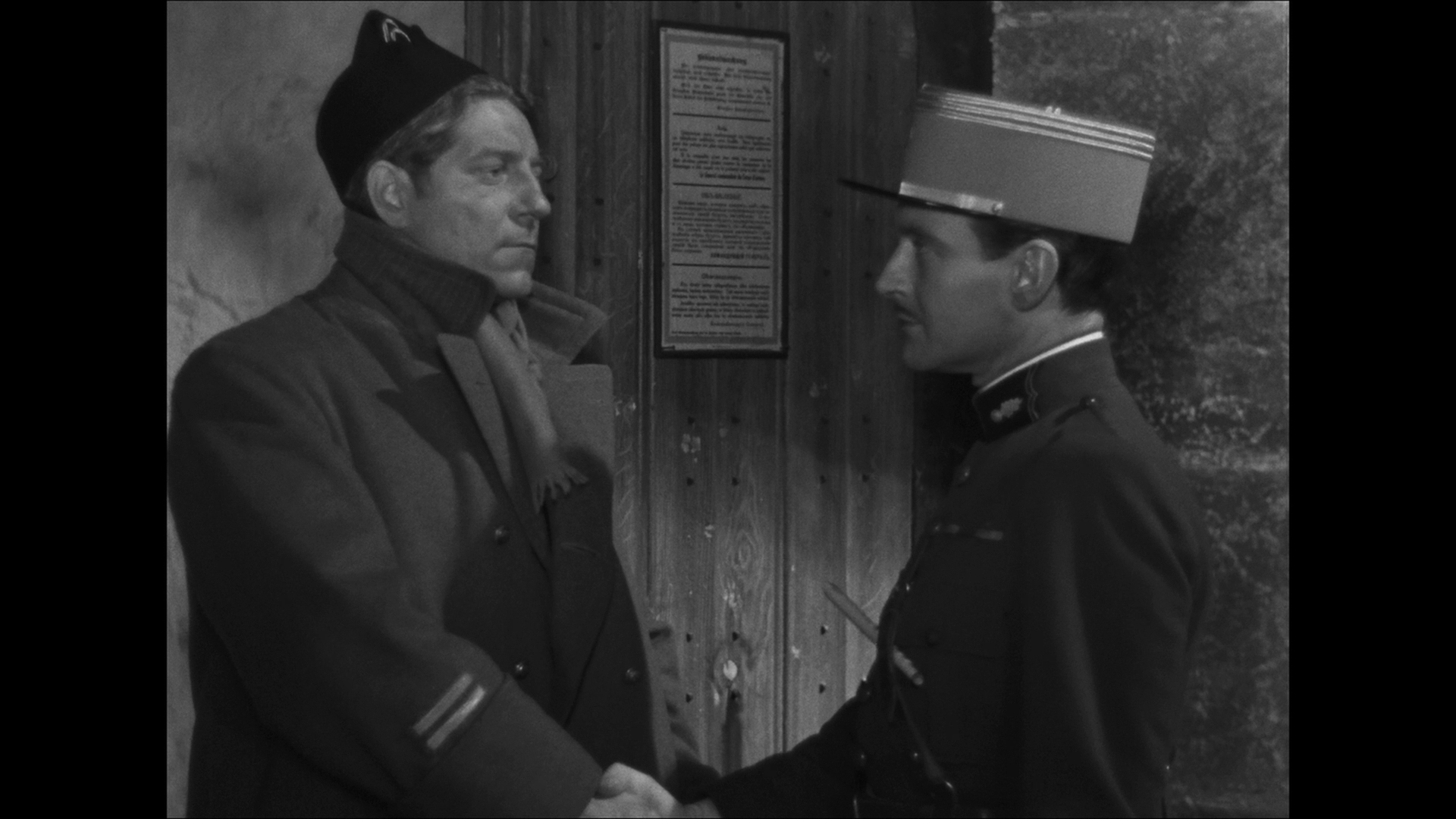 La Grande Illusion looks absolutely amazing on Blu-ray for a 1937 movie. Considered one of the most important films in French cinema history, this transfer is based on a complete restoration of the original camera negative, thought lost for many years until it was found in Russia (of all places). Lionsgate has provided the 113-minute movie an AVC video encode, on a BD-50. The main feature averages a solid 24.44 Mbps. La Grande Illusion is presented in its original aspect ratio of 1:37:1, the standard of its day.

The black-and-white cinematography looks startling crisp with excellent contrast. There is a hint of some dimensionality to the picture and softness is a rare problem, especially considering the film’s age. It’s almost a quantum leap in quality over prior home video editions, which looked faded and worn in comparison. The transfer is flawless and modern digital tools have been sparingly used to bring out the best to the image.

Completely free of sharpening or significant filtering effects, the BD is an overwhelmingly film-like experience. The entirely naturalistic grain fields are reproduced with ease by the compression encode. Shadow detail is superbly rendered with pitch-perfect black levels and an impressive gray scale.

Particularly jaw-dropping is how clean the master looks, almost as pristine as newer films, while retaining that film-like quality. Lacking scratches and worn film damage of almost any kind, the negative is easily comparable in quality to the masterpieces from Hollywood of its era that have also been released on Blu-ray. It does lack a touch of the finer detail and pure resolution shot on better film stock, but its positives easily outweigh that minor quibble.

The two main audio tracks are the original French mono sound, presented in DTS-HD MA 2.0, and a German dub, once again in DTS-HD MA 2.0. While one assumes they made valiant efforts to remaster the soundtrack as best they could, the overall sound is a big step down from the beautiful video. La Grande Illusion frequently uses music and spectacle in its narrative, but the surviving audio elements sound harsh at times.

The first act of the movie seems to suffer the most from the audio problems, especially in the scenes with more than a couple of actors. Voices are tinny and strident, with an unpleasant edge at times. There is only so much a lossless presentation of limited audio elements can help, though this problem mostly dissipates as the movie develops. The mono mix does the bare minimum in conveying the essential aspects of the action, but it’s a weak effort against similar movies made before the 1950s.

All the extra features are presented in true HD.

1958 Theatrical Trailer (5:36) – A fascinating trailer where the director, Jean Renoir, actually goes over the movie in a manner similar to Alfred Hitchcock’s promotional work.

Introduction By Ginette Vincendeau (12:14) – Probably the most insightful featurette on the disc, both Renior’s history and the context of the film are discussed. If you have any trouble understanding the themes of La Grande Illusion, this piece will answer all your questions in a blink.

The Original Negative: A Remarkable Story (11:59) – An interesting featurette in French with English subtitles, detailing the oddball history of how the camera negative traveled all over Europe and Russia before being returned to France in the late 1970s.

Success and Controversy by Olivier Curchod (23:21) – Another featurette in French with English subtitles, Curchod details the importance of La Grande Illusion and places it in a historical context with other cinema. The style is a little dry but the content is mostly informative.

John Truby Talks About La Grande Illusion (4:28) – A screenwriter breaks down a few of the themes in the movie, from a writing perspective.

Restoring La Grande Illusion (3:24) – A short extra that only shows the differences via screenwipes of the restoration and the original master.

Note: Normally, DoBlu screen shots have captions to aid readers in seeing what the writer did. This might be one of the most definitive cases where the screens speak for themselves.