Half of ATM is effective. Stupid, but effective. It’s Christmas time so three co-workers visit a walled off ATM, and become trapped when a killer shows up outside. The first 40 or 45-minutes are spent wondering who the killer might be (it’s not the obvious) and why David (Brian Garaghty) chose to park half a mile out from the closed off machine.

As a darkened face killer, complete with hood and face mask, it’s an interesting one. He doesn’t spend his time trying to kill so much as he does mentally torture the group. He bangs on walls, snips the electrical wires, cuts off their heat, and stands ominously outside. It’s that indirect assault that makes ATM fun even with the logical questions.

Then, the stupid becomes overwhelming. The thrills and literal chills with temperatures diving into the negatives become secondary. Inexplicably, a man waltzes right into the ATM, oblivious to the killer, giant “Help” note written in lipstick on the window, and the general panic of the occupants. Even worse, he shops at the same place as the killer because he wears the exact same coat. It’s a case of mistaken identity, horrific timing, impossible coincidence, and miserable scripting.

That begins an emotional spiral that that begins a series of head smacking actions, from one character leaving the secure and safe confines of the ATM’s room to the blatant disregard for common sense. It takes hours until someone realizes that damaging the ATM itself may lead to an alarm blaring, and even then, it’s still not enough. They try to set off the sprinkler system with a small fire, this while the room is flooded with freezing water from a hose draining into the vent from the outside. Know what goes great with sub zero temperatures? More water.

ATM’s problems lie in the location. Unlike other single locale thrillers (say 2010’s Frozen), this one has too many outs and too many solutions that are never capitalized on. Characters disregard logic as often as they do the many clear outs they have. The final sin here is leaving the whole thing open without any solid answers, but finding the time to needlessly recall the entire piece in flashback. Anticipation builds that it might lead to something definitive, but no. ATM closes by letting viewers know it might happen again… and it could be you. That’s fine. Most of us would just leave. 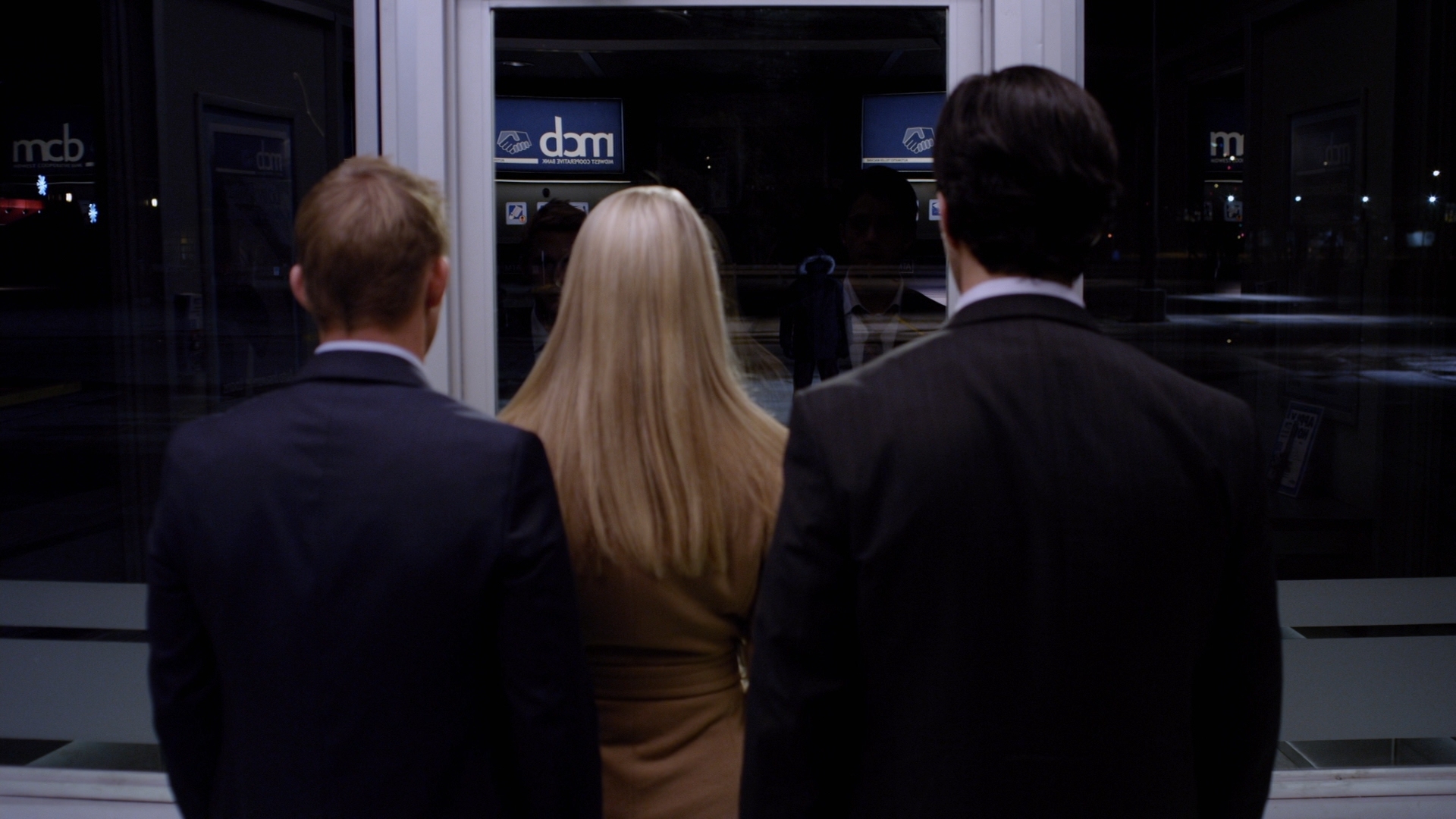 Most of the nighttime photography in ATM holds up. The Red One produces some exceptionally tight black levels that preserve shadow detail and keep the image pure. In those few instances where blacks crumble, some (very) visible vertical banding occurs that distracts. Part of it is the variation in how clean the image was prior, and another element is how severe that banding can be.

ATM doesn’t scream detail or fine definition, although it has its share. Much of the photography happens in the mid-range where the image will soften or flatten out, enough to sour the otherwise clear, pure imagery. Aside from the artifacts mentioned above, clarity is a consistent trait. There are no other instances of noise or compression.

This one is fueled by VC-1, a codec not seen ’round these parts for some time. If ATM proves anything, it’s that there’s still plenty of room for both VC-1 and AVC. They both do their thing with fantastic end results. Most of the complaints here undoubtedly lie at the source. Nothing here immediately screams home video compression.

Pale and flat, the palette will wear down flesh tones and slash primaries. The interior of the ATM cabin is a light blue that veers more towards gray, while flesh tones are not that far off. Overhead fluorescent lighting isn’t doing the film many favors. ATM is free of general nuisance concerns like aliasing or shimmering, so maybe it all balances out.

Despite being so contained, ATM has some moments of fine audio work. With the cold, winds begin whipping up outside, each camera visit outside becomes an active audio experience. Stereos and surrounds pick up on the breeze to create an effective wrap-around effect. Some of the street level material beforehand is engaging too, with cars panning through the surrounds as two characters await a cab.

In the closing moments, a car smashes through the front of the small building, a minor thud resonating in the low-end. The hearbeat-esque score will drop lower just a bit earlier. When water becomes a battle, the surrounds kick into overdrive, the overhead sprinkler pinging off tattered metal, all based around the camera location. Despite the confined nature of the film, this is a mix that gets active when it finds a chance.

A basic eight-minute making of is the heart of the bonus features, unless you’re one to consider trailers a highlight. Note the disc also contains a director’s cut of the main feature. The review is based on the theatrical edition.