Much of The Hunter’s slow build is in place to build upon a concerning ecological message, although one that at times is indirect. Captured in Tasmania, Hunter soaks up stunning locales, rich in natural beauty. It’s no wonder the Tasmanian Tiger took up residence in such a place.

Carrying the film at the forefront of those visuals is Willem Dafoe, playing against the type as a hired gun, grabbed by a biotech firm interested in the Tiger’s genetics. His personal mystery is lean, boarding with a local family, and caring for them between runs at the animal. Like the film’s message, he is indirect, claiming to be part of a local university team researching the creature.

His cover becomes unwound when surly local types begin to impede on his mission, losing their jobs to conservationists. Hunter takes a wide leap of faith as far as the company invested in Dafoe is concerned, cropping the impact of a twist that is already shoved onto the back-end of the movie. Hunter’s scenes languish as Dafoe wanders in the wilderness, setting traps, hunting, and repeating the next day. His investment in this family carries weight, not the traps, certainly more so in the final moments.

Even if the pacing feels off, draining much of the general energy, the narrative patches it up. Hunter plays both sides despite the now familiar preservation angle, the emotional collapse of Dafoe shared in an unexpected manner before the fade to black and subsequent rebound. All of those elements wear their purpose proud even if it’s not evident as they happen. This is a cleanly cut film with regards to its character, each given a role the pushes the story arc ahead.

Supporting roles, with the exception of the unexpectedly burly loggers who exist to intimidate, work in tandem with Dafoe’s lonely, outcast mentality. Sam Neil scores as a divisive local, lacking trust in outsiders, bending the friendly, inviting fabric set up by the family hosting Dafoe’s living quarters. Hunter tugs in a lot of directions with a direct line running through the middle of its unrest, getting away cleanly despite the shoved in happy ending. This one still has bite. 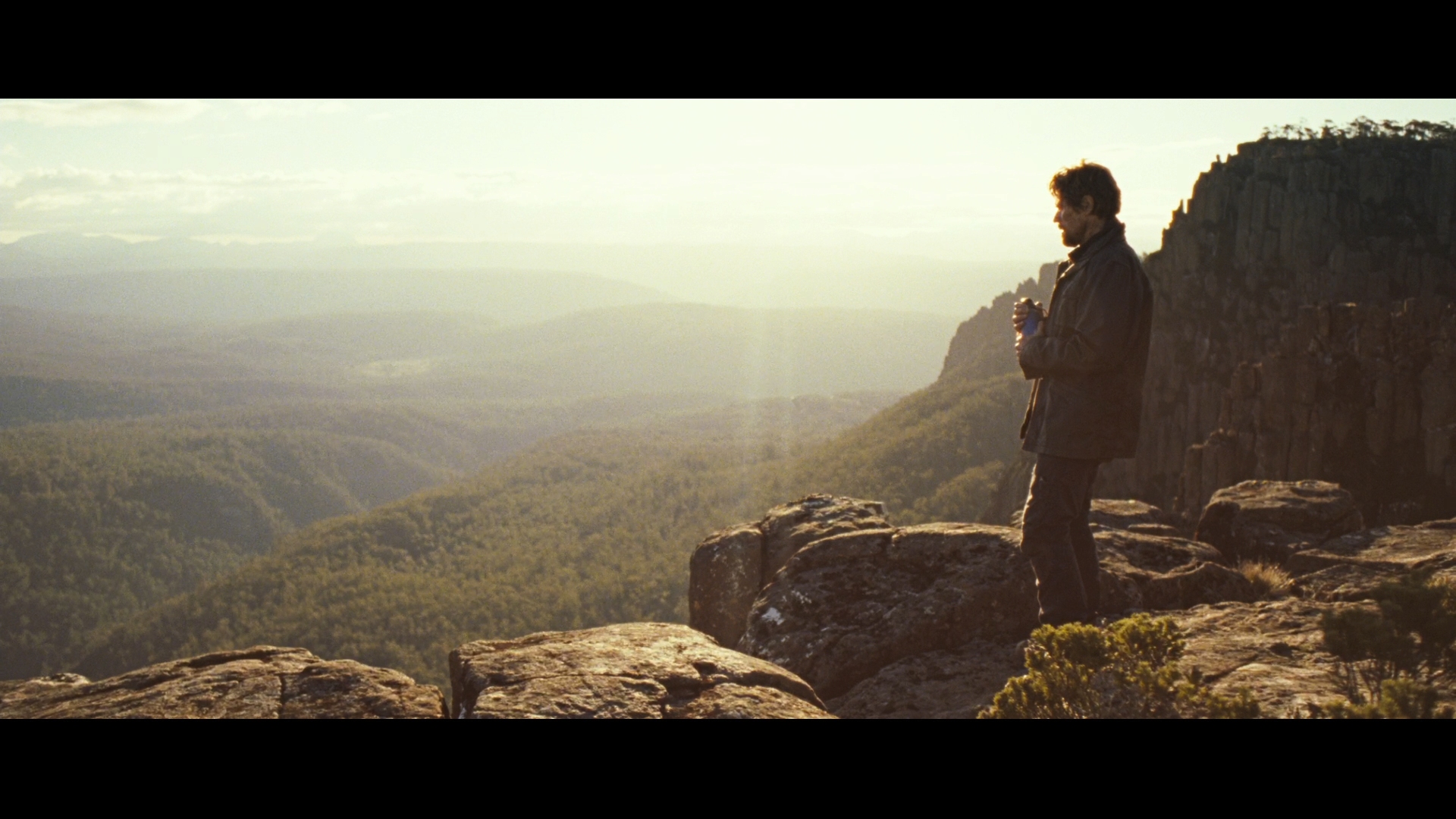 The Blu-ray comes courtesy of Magnolia, an AVC encode with one job: preserve the photography. Does it ever. Lush, rich, and dashed with chilled colors, landscapes are breathtaking. Angles are set to bring depth for miles, peering wide into the expanses of these valleys. Every nuanced detail comes forward, from the spread of trees to tall grass down to the miniature sea of rocks. Nothing feels lost to source photography or this compression.

That’s impressive when you consider this disc must also lift an often thick grain structure and keep it behind the image. Not only is it capable of resolving the dense vegetation, the mastery over the film stock is impeccable. No matter the backdrop, from brilliant sunsets to dry grasslands, the disc is consistently aware of potential trouble spots, and makes accommodations to compensate.

Because of that, it’s not only the forests that dazzle. Close-ups are tight and focused in their fine detail, rarely scraping by. Intensity is driven by the level of visible texture. Despite the dim palette, flesh tones come away without harm, only pale if the weather conditions call for it.

The problem? The intentional fade to the material kills black levels. Far too often they’re found to be drowning in squished grays that have no depth, and rob the image of dimensionality. Odd, since the opposite side contrast comes down fiercely during those daylight scenes, even running hot to bake the picture a bit. Black levels have no such intent.

Spacious and open, or in other words, a perfect match to the broad photography strokes, defines this DTS-HD mix. From the expanse of wildlife to the motion of cars which are nothing more than an unseen background event, Hunter doesn’t miss anything.

Only a few bullets are fired during the film, but they ring out into the surrounds brilliantly. There’s a repercussion for almost every shot emotionally, something the sound can carry. Rain and storms, including high winds, are generous in how they split the stereos while whipping back into the rears. Almost everything here is subtle, but a design that sucks you in without realizing it.

A key component of the story concerns a series of speakers, spread throughout the property. Late, Dafoe finishes the wiring and blasts them at full volume, enveloping the listening environment with music. The spaciousness goes well beyond a score bleeding into the surrounds, but a total concert-like feel. It’s fantastic.

Director Daniel Nettheim and producer Vincent Sheehan dive into the disc’s commentary track, while they continue their chat over a series of deleted scenes (6:39 total). A making of is split into four parts, breaking the half hour mark, and producing suitable, in-depth material worth a watch. Magnolia dumps a trailer and BD-Live access here too.