Wanderlust finds excuses for its comedy, not reasons. That’s the distinction that sinks the film in the back half after a promising start which finds George (Paul Rudd) and Linda (Jennifer Aniston) down on their luck, seeking refuge in a commune.

For a while, Wanderlust is going somewhere. For that matter, so are George and Linda. They move to a studio apartment, lose their jobs, and move in with George’s impossibly abusive brother. Seeking asylum, they inadvertently wander into the hippy-ish commune, full of nudists, shared sexual partners, wine making, and Willy Nelson level pot smoking.

No longer does it have something to do or somewhere to be. It’s fish out of water without so much as the water, just two aimless fish flopping around in the awkwardness of a different lifestyle. In other words, the worst episode of Wife Swap ever. It’s funnier in what Wanderlust tries to justify itself with rather than what it offers, say the greedy land developer angle and a, “this makes zero sense in context” plot twist that boggles the mind as to its inclusion.

Too much of the film feels as if a camera was set up, the script tossed to the wayside, and the actors ran with it. In actuality, that’s not far from the truth. On the Blu-ray, there’s a second version of the movie constructed in the same manner, but made up entirely of alternate takes or ad-libbed lines. That’s how much material they had to work with, and that randomized cut only loses 20-minutes of length.

It’s unfair to shred Wanderlust on its structural basis or reason to be. After all, the comedic highs are consistent even when not backed by, well, anything. Genuinely funny lines and wholly uncomfortable situations overflow from the nonsense presented as story. The commune has a tendency to make up rules as it goes along, Rudd’s straight face and snappy sarcasm the perfect counter to their Earth-born lifestyle.

It probably goes without saying that Wanderlust makes the most of that R-rating, a raunchy, well endowed celebration of sexuality and male genitals… visually or otherwise. The material pushes whatever boundary it can to separate the normalcy of city life with this drastic switch, upping the weight of the contrast between sides. Wanderlust almost pays itself off in the closing moments, a news report celebrating a few running gags in a montage-like moment, nearly enough to send the audience home happy. It’s hard to forgive that aimless, sagging middle though. 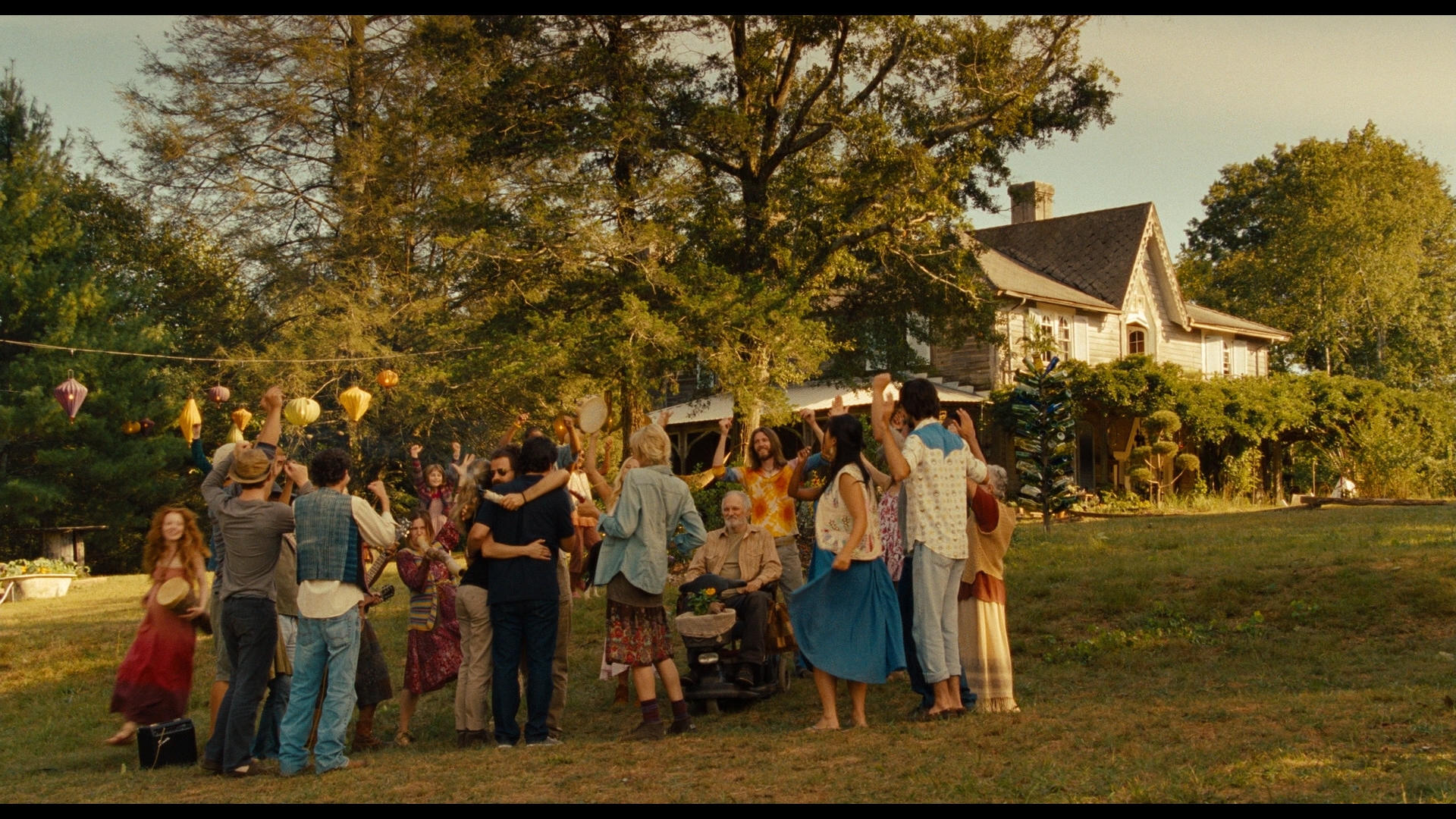 Wanderlust runs the gamut of HD successes and failures. Orange and natural flesh tones? They’re both here. Intense, deep black levels and flatlined, murky gray black levels? You’ll get both. Striking close-ups and flat, timid ones? Yes on both counts.

It’s a tough one to gauge, the mountain of piling issues an instant distraction from the beauty of the highlights. Georgia-based cinematography is outstandingly beautiful, the commune located amidst stunning scenery and perfect definition on Blu-ray. From the color saturation to the depth, those establishing shots are marvelous.

So are the close-ups, at least every once in a while. A slew of them will stick around and forge ahead with tightly delivered facial detail behind the often bronzed flesh tones. Certainly, an equal number will veer the other way, wherein the milky saturation will swallow the texture whole, leaving patchy blobs of color.

Then, those black levels. Ugh, those black levels. A mere edit in the midst of a conversation is all it takes to send them tipsy. The worst part? They cave in on the image when they’re needed the most. Night is drained of depth, the screen filling with a mixture of blue-ish/gray splotches that are a meager substitute.

For being so open and in tune with nature, this audio mix doesn’t do much to place the characters or listeners there. Ambiance is negated to a pittance, if discernible at all. A few peppy songs will fill up the speakers and add some sense of directionality, the bleed enough to take notice of. That’s more than can be said for most of this track.

There’s a hallucination sequence that offers some positional work, random, weird effects working through the surrounds and stereos. For a bit of LFE punch, there’s some extensive Digeridoo playing which works the low-end into a mini frenzy. That’s probably a highlight in a track that aims for the basics.

As a Judd Apatow produced movie, extras follow the usual course of action for movies with his involvement. Writer/director David Wain is joined by writer Ken Marino, Paul Rudd, and occasionally Kevin Pollack. For some reason, the disc is D-Box compatible, with BD-Live bandwidth wasting just because.

The second spin of the movie mentioned above is labeled The Bizarro Cut if you’re interested, the same idea toyed with a few years ago via teen comedy Sex Drive. A short gag is worth the time investment at six minutes, while a line-o-rama almost seems like overkill considering the alternate version of the movie. God Afton! is a 27-minute making of, the usual tone and style in place for these pieces.

Penis Envy is a look at… oh boy… Joe Lo Truglio’s prosthetic penis. You can’t make this stuff up. Know what though? It’s funny. The Elysium Campaign follows actor Jordan Peele around the set as he impersonates Obama. Wainy Days is a sort of side story/song that follows another couple.