Missing In Action 2 is the rare prequel that actually betters the original movie in the franchise. Colonel James Braddock (Chuck Norris) is back in action, this time as the story flashes back to his days as a POW held captive by the Vietnamese. It’s set years before the events in the original Missing In Action.

The first hour acts as a tense prisoner drama, as Braddock and his fellow American POWs suffer beatings and psychological torture at the hands of a sadistic Vietnamese Colonel. The characters are better developed in this prequel than anyone in the first Missing In Action, including Braddock himself. Chuck Norris goes beyond his usual shtick to deliver a credible performance as a soldier driven by honor and an indomitable will to resist his captors and escape.

It’s only in the last 30 minutes of this 95-minute film that the serious action ramps up. This is the point where Chuck Norris does his thing, going all Rambo on the prison camp. It’s a taut, well-choreographed action bonanza in the last act that is the main reason for movies like this one to exist. Braddock wages a one-man war in a convincing manner that does not stretch the bounds of credibility for an action hero.

Missing In Action 2 is not only one of the best movies in the vast filmography of Chuck Norris, but one of the best action movies of its era. While the basic concept is not wildly original, it executes a strong dramatic framework around Chuck Norris to perfection. The other characters all have distinct personalities and you come to empathize with the POWs as the movie progresses. It surpasses the original movie in the franchise by every criteria imaginable and works quite well on its own as a standalone movie. This is one case where watching the prequel first, before the original movie, makes sense. 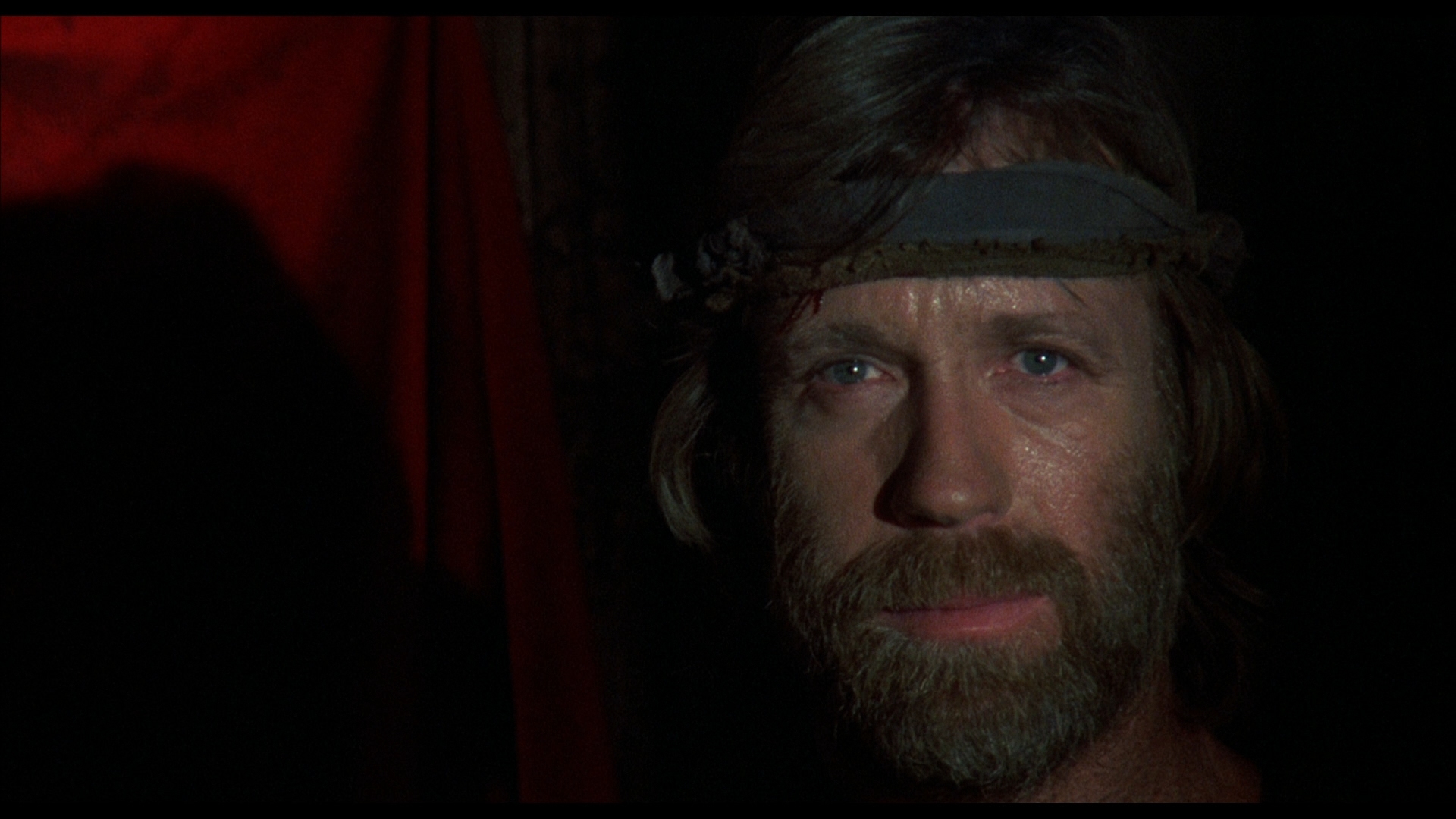 Wow, this disc serves up a gorgeous picture and transfer for a 1985 production. It’s apparent from the opening credits that the picture quality is vastly improved over the original Missing In Action BD. The financial backing was beefier and apparently those funds went to improving the cinematography. The main feature is encoded in AVC on a BD-25, at an average video bitrate of 27 Mbps. Technically this is a flawless transfer, from compression to the film elements themselves.

Untouched by filtering or edge enhancement, the movie looks clean as a whistle with a pleasing level of clarity and resolution. It’s not the sharpest picture in medium and long shots, but the contrast is solid while maintaining excellent black levels. It would appear the original camera negative has been used for the transfer, producing an image that looks as good as on the day the movie was released to theaters. The close-ups are razor-sharp and display top-notch detail for an older film.

The movie’s fans can rest assure this is an exemplary transfer of high-quality film elements and the best possible it could look on Blu-ray. The green foliage of Vietnam looks beautiful in the scenery and serves as a perfect setting for the intense jungle warfare.

The main audio option is a DTS-HD MA 1.0 soundtrack. For a mono soundtrack it sounds quite vivid. The orchestral score sounds rich and full through the one channel. The fidelity is not going to win awards, but it never pulls the viewer out of the movie.

As an action movie with a number of explosions and bullets flying everywhere, the mono soundtrack does its job in delivering a strong sense of reality. The appearance of a helicopter is effectively accompanied by its familiar rumbling sound. The sound quality is greatly improved over the weak soundtrack found on the original Missing In Action.

The sole extra feature provided is the film’s theatrical trailer.