Missing In Action is a pure action thriller of its era that heavily relies on Chuck Norris’ star power. Produced in 1984 by Golan-Globus Productions, its story resembles a lost entry to the Rambo franchise.

Colonel James Braddock (Chuck Norris) is a former American POW that ended up being held for seven years after the Vietnam War ended. Haunted by his experience once he escapes to America, Braddock decides to go back to Vietnam and wage a one-man war to rescue the friend he left behind in the Vietnamese prison camp.

This is not a great movie by any stretch, but worth a viewing. The plot never builds a convincing sense of danger to the hero but the action is realistic. Chuck Norris plays Braddock as an unstoppable force of nature with one purpose, to exact revenge on the people responsible for the prison camp and put a stop to it.

Braddock is a man of few words and the script is threadbare outside of setting up the villains. Action fans will welcome the variety of locales, as much of the lead-up takes place in the urban areas of Saigon. That sets up Chuck Norris for some interesting stealth action. Only the last act includes the familiar marsh fields of Vietnam, seen in so many other movies.

The conclusion is rarely in doubt, but the compelling action scenes have their own charisma that rates this ahead of lesser B-movies. This is competent entertainment, particularly for genre fans that don’t mind the tamer standards of pyrotechnics and warfare on film from the eighties. Fans of Chuck Norris should definitely check it out, while others might want to be more cautious. 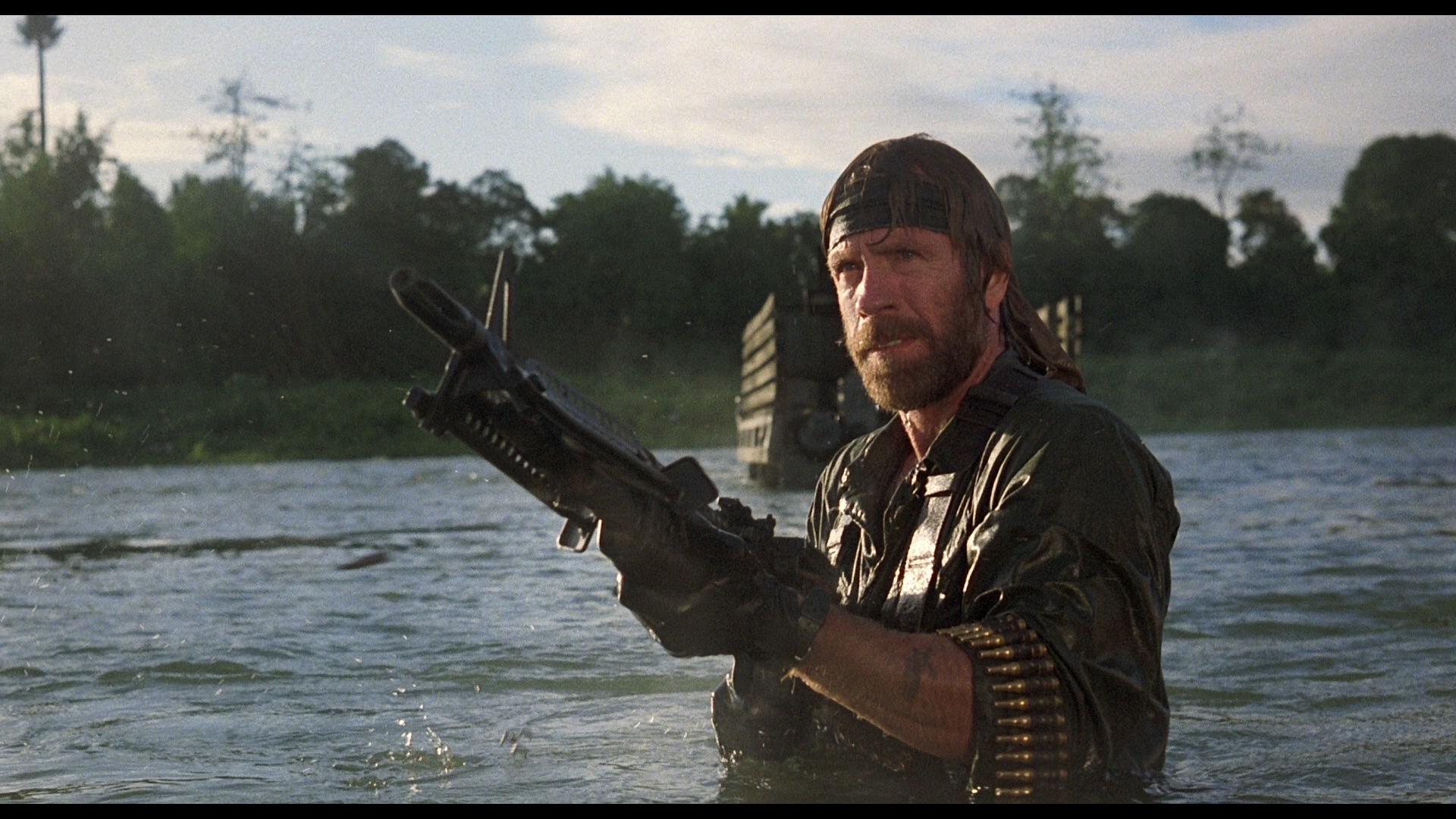 Missing In Action is presented in a 1.85:1 widescreen ratio on a BD-50. The AVC video encodes averages an extremely high 35 Mbps that produces no compression errors. Unfortunately that figure does not obscure the rough film elements used to produce the transfer. It definitely delivers a cinematic experience with little added processing, but the low-budget production becomes incredibly grainy and murky in night and interior scenes.

While it’s nice no digital noise reduction or edge enhancement was applied to the transfer, there are moments when the clarity is little better than a DVD. Budgetary limitations in the original cinematography negatively affect the picture quality, particularly as Chuck Norris sneaks throughout the night in his best imitation of  a ninja.

The scenes set in the jungle look the best with better contrast and detail. The color palette is fairly neutral but looks dull compared to a transfer made from a camera negative. It’s obvious the film print used for the transfer was given no special treatment.

The image has no depth or dimensionality to it and visibly worsens in darker shots. Resolution varies wildly over the course of the movie from mediocre to average. Some viewers will be unhappy with the coarse grain that permeates much of the film. A few scenes in the beginning have very poor black levels due to shoddy cinematography.

The main audio option is a DTS-HD MA 1.0 soundtrack. The mono audio struggles to keep up with new movies in terms of punch or fidelity, but does the basics well. This is not the disc one is going to use to demo your surround setup. Dialogue is understandable and mixed appropriately with the effects and score.

The score sounds dated and the mono track does not help in that regard. Music comes off as strident and somewhat unpleasant to hear at high volumes, particularly the Pop songs heard in the background. The frequent hail of bullets and explosions sound better and more typical for an action movie of the era.

The sole extra feature provided is the movie’s theatrical trailer. It looks in much worse shape than the main feature itself.