Jeff, Who Lives at Home’s leisurely journey through a single day in the life of a Baton Rogue family is anything but typical. Sure, it seems like the direct narrative, the coy lead character in Jeff (Jason Segel), and timid locations won’t amount to much… but they do.

Jeff is an outsider, not so much because of his pot smoking habit, joblessness, or connection with his mother’s basement. He’s simply an idealist who believes everything connects and has a purpose. That theme carries Home from its frustrating onset which tries to enlighten audiences on M. Night Shymalan’s Signs to its wonderful, cheerfully contrived finale. It has to play out in that manner, connecting the family and offering direction they didn’t have in their attempts to escape.

That’s the thing with Home. None of the characters want to be who they are or be where they are. Each is desperate to find some type of release or answer. Sharon (Susan Sarandon), perfectly cast as the lone family patriarch, is locked in her cubicle. Pat (Ed Helms) is stuck in a marriage that he feels stifles his enjoyment of the rich life he can’t afford. Linda (Judy Greer) is the other half of the latter romantic puzzle, and then there’s Jeff. He only wants a sign, and he seems to think that’s Kevin who probably doesn’t exist. It makes sense in the narrative.

Home is remarkable in how casual it is, set up almost as a modern sitcom but ridiculous enough to break out of the indie fold. Oh sure, the small time credibility is there, not only because of the lens work from the Duplass brothers, but the tightly wound story that doesn’t even crack 80-minutes. In that time, the film moves from light, quirky, and peppy to invested in the world of these few people. Those fanciful moments, like Pat struggling to drive his new, now devastated Porsche down the highway in a marriage-driven panic, eventually calm down. Home matures with its characters, and as they deal with issues they all share.

The film might be too easy to plainly write off or discredit for a lack of some unspecified ambition. Thinking this breezy comedy is seeking lofty goals is almost comical, but that’s sort of what it has. There’s an ambition in each character they don’t know they have, whether it’s in the risk-taking or their drive to find a purpose. Seeing that through to conclusion is satisfying, and the fact that it all comes together in such a hilariously forced manner makes sense: it’s all meant to be. 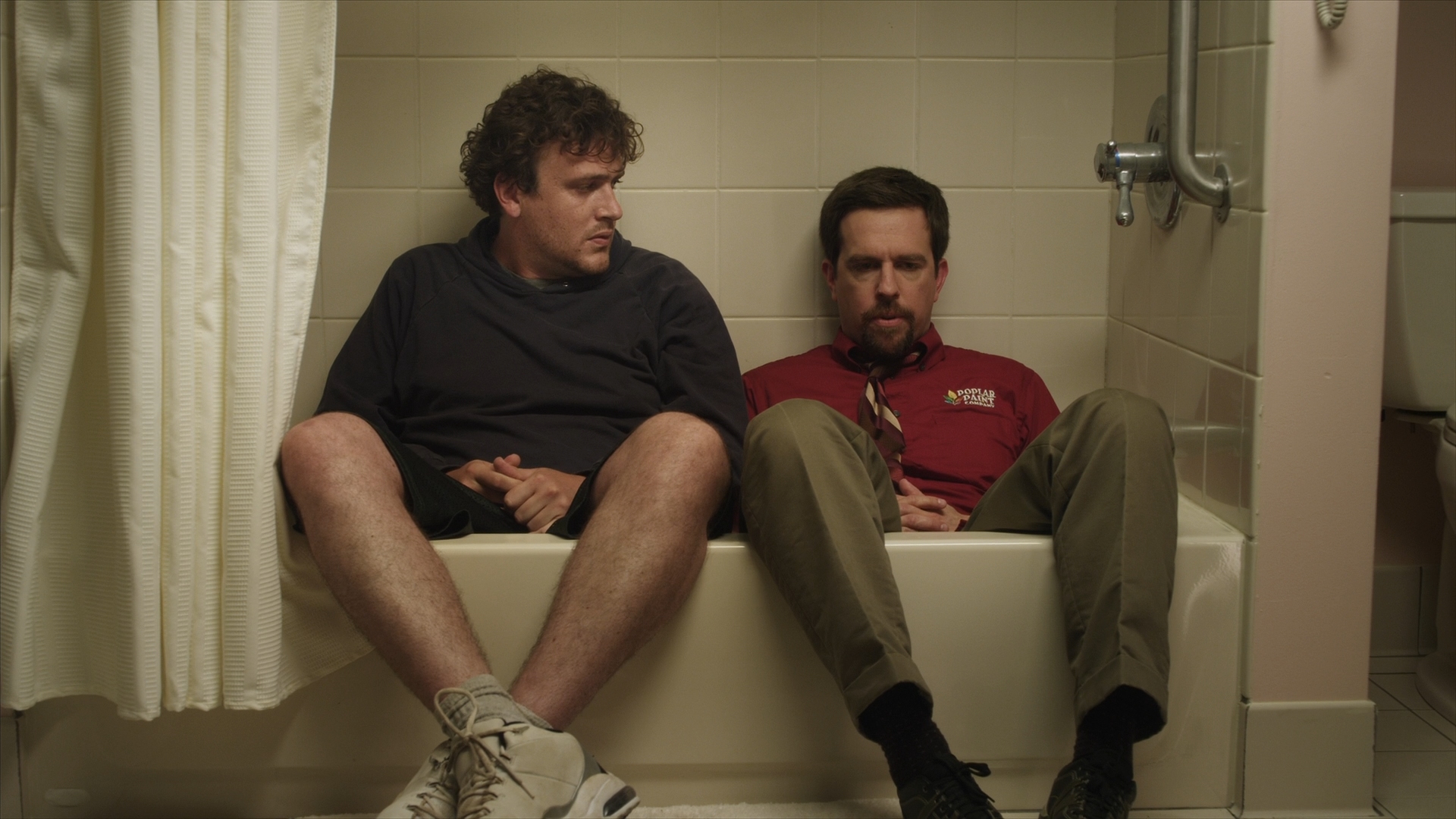 Jeff, Who Lives at Home opens on a tight close-up of Jason Segel, setting a wide expectation for the material yet to come in this digitally sourced production. Facial detail dazzles, and the movie doesn’t merely dabble in the concept of superior resolution close-ups. It’s overflowing with them to the point of making it almost mundane, and that’s awesome. The presentation doesn’t keep up with the expectation so much as it crushes it.

There’s a lack of visual challenge in the material itself, i.e., it’s mostly set outdoors and with the sun shining overhead. When the Red One Epic is asked to produce firm results in a closing shot -a nighttime interior- it doesn’t close the deal. But, those two minutes are a small limp in a straight walk to an HD blessing. Nothing here feels overly tweaked or altered, the image not only stable but rich in saturation that doesn’t stray far from reality. Flesh tones are right on the money.

Suppose there are a few glances at negativity that may bother some. Say, a first-person swaying shot at some windows that flickers beyond how it should. There’s some definite, unmistakable smoothing being applied to Susan Sarandon too, a move that causes her scenes to stick out unintentionally, certainly more so than if they were left alone. Go figure.

There’s too much visual appeal to be down on this one though. The elements offered up, from the intense contrast of the outdoor lighting to the way it reflects such remarkable amounts of texture back at the camera gives the piece an instant appeal. Clarity connects too, the Red producing no ill noise and the encode from Paramount sparkles with transparency. You’d never guess it was compressed in the first place.

Beginning at the end, Home will capture a fleeing rescue helicopter in the surrounds -cleanly mind you- as it passes behind Segel’s character. We start there because it’s about the only element worth discussion, and everything else is a waste of digital characters.

No, it doesn’t sound bad. It’s not worth getting worked up over or anything, the dialogue precise and the balance is firm. Home carries all the trappings of modern sound, so don’t reach for the pitchforks quite yet.

The thing is, Home has some moments where it could be active. There’s a street chase of sorts that doesn’t break through the stereos like it should, a car accident involving a tree that doesn’t thump the LFE, and chances for ambiance that don’t spark it to life. It’s sedate and a little mundane, but never wrong. It is what it is, and if that sounds like a cop-out, well, it is.

Paramount doesn’t include anything bonus wise here, not even a trailer.