Do you hate terrorists? Do you love Chuck Norris? If your answers are yes, this is the movie for you. Chuck Norris headlines this 1986 action movie, a Golan-Globus production originally made under the auspices of Cannon Films and now released by MGM on Blu-ray. The Delta Force is a B-movie at its core, but it’s definitely one of the better entries in Chuck Norris’ career that still entertains today. The plot is carefully laid out to make the action plausible in the film. Only in the climatic battle does anything descend into moments of eighties’ cheesiness, like the super-motorcycle that shoots rockets and grenades.

The story for The Delta Force is relatively simple and loosely based on real events. An American airliner gets hijacked en route to Rome by Lebanese terrorists. The terrorists take hostages and force the plane to land in Beirut. The Pentagon decides to send in the Delta Force, led by Colonel Alexander (Lee Marvin) and Major Scott McCoy (Chuck Norris), to go undercover into a hostile Beirut to rescue the passengers. The Delta Force are an elite, anti-terrorist and combat unit in the U.S. Army.

The movie takes its time setting up the hijacking, focusing on the terrorists as they manhandle the passengers into obedience on the flight. There is no moral ambiguity to the script, these terrorists are painted as clearly evil men with bad intentions towards both Christians and Jews. Particularly villainous is Abdul (Robert Forster), the terrorist mastermind and Yin to Chuck Norris’s Yang in the film. As long as one does not expect a nuanced understanding of Middle Eastern politics circa 1986, you should not be disappointed.

Most of the real action does not occur until the final act of the movie, as the Delta Force makes a daring raid to rescue all the hostages. This is where the plot starts breaking into action movie tropes, including a one-on-one duel between Chuck Norris and Robert Forster to settle matters. The plot overall is fairly predictable and the final outcome is never really in doubt, but the action is very good for its era. Action fans will be enormously satisfied to see Chuck Norris work his magic in a military setting. Viewers won’t want to miss Chuck Norris dispatching a terrorist with his signature roundhouse kick. 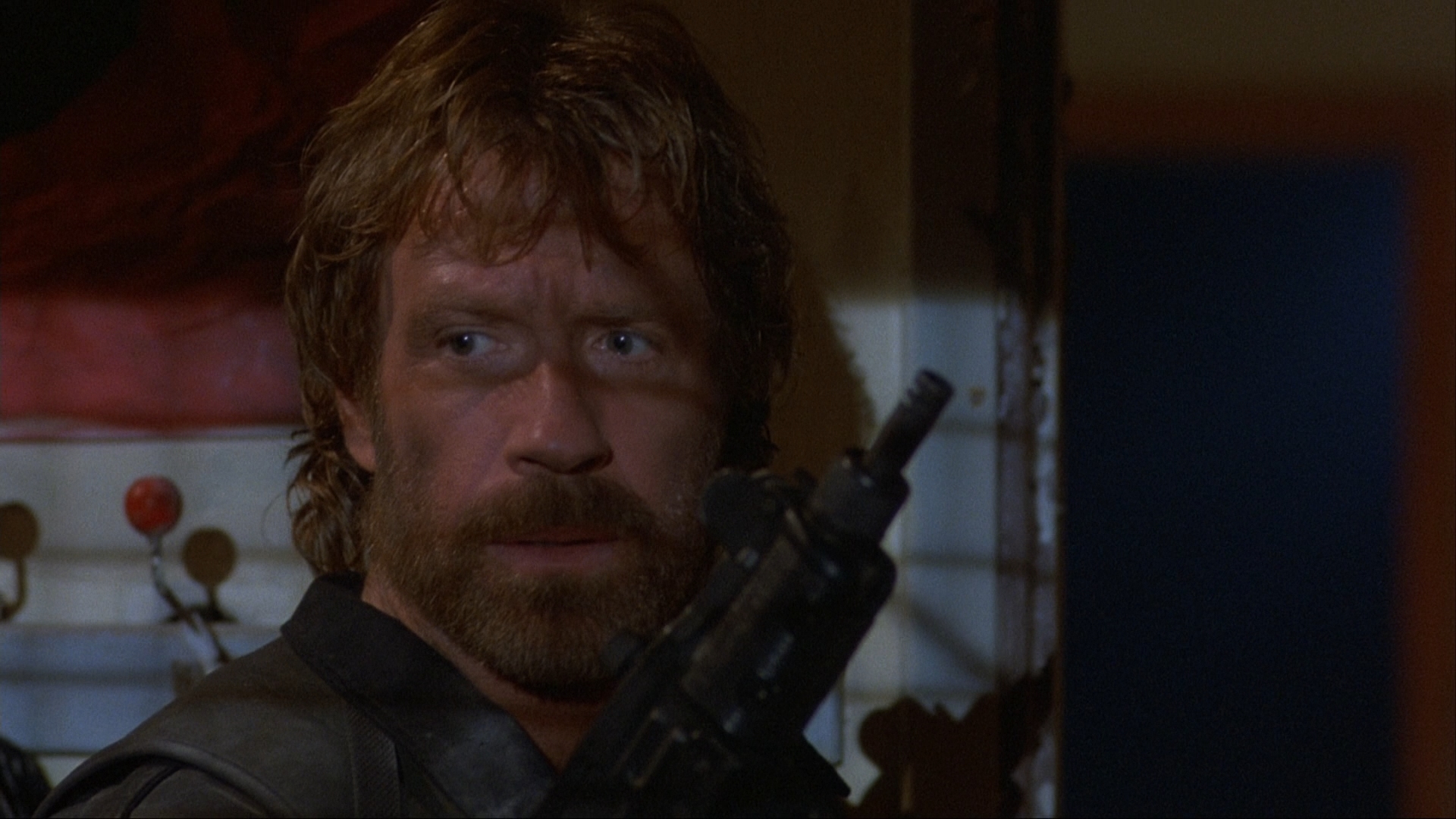 MGM has used a fairly serviceable transfer for The Delta Force. The 1.78:1 widescreen presentation is on a BD-50 and shows no signs of having been filtered to reduce grain. The 129-minute film is encoded in AVC at an average video bitrate of 32 Mbps. Despite that very high figure for the video encode, the image does show some compression problems in spots. The opening scene has some artifacting, as the encode breaks down under the strain of heavy grain due to the optical mattes used for the credits. A minor amount of chroma noise appears later in the movie. All things considered given the large grain structure of the film at times, the compression is okay outside of the noted problems.

The film elements used for the transfer look in good condition and the scan looks fairly recent given the quality of visible detail. The Delta Force is not the sharpest movie you’ll see, as dimensionality and high-frequency detail waver from shot to shot. Close-ups of Chuck Norris have extraordinary detail for a catalog film made in the Eighties. Flesh-tones do appear too warm, as the original color-timing has clearly been altered to strongly favor magenta. Probably the weakest aspect is the dirt and debris plainly visible on the transfer during the burnt-in subtitles used for translating the terrorists’ language.

While black levels are generally decent, there are a few scenes where shadow detail gets clipped. You can notice the black crush on Robert Forster’s head the easiest, where it becomes difficult to make out the strands of hair. Some sharpening has been applied, though it has been selectively used depending on the nature of the scene. Most of the film is free of halos, but when the edge enhancement has been used it is quite noticeable. One memorable scene has a bus literally glowing with halos around its edges.

The main audio option is a DTS-HD MA 2.0 soundtrack. The stereo mix has anemic bass and a surprising lack of fidelity for a lossless soundtrack. There are some decent directional cues to the action on screen, such as a truck that moves across the soundfield from left to right. Sound effects lack any punch and can be characterized as thin at best.

The fidelity is simply not in the same class as a new production. After hearing something like the surround mix of Transformers, the bullets and explosions sound muffled and unrealistic here. On the plus side, dialog is intelligible and easily heard.

The sole extra feature is the film’s theatrical trailer.