New Years Eve is a dumper. That’s a new term, and although it could mean a few things (one of them equally meaningful), it’s referring to this trend of off holiday movies. We’ll excuse Christmas, because, well, you can’t hate Christmas. Instead, dumper shall live on for projects like this, wherein the movie studio stuffs a slate of actors into a loosely themed picture dumped out for the widest audience possible. They did it for Valentine’s Day, and we can now surely await President’s Day.

Ooh, or Independence Day. Yeah, that’ll be a huge seller. Wait, they did? It didn’t turn out so hot huh? Well then never mind.

It’s an hour before New Years Eve is done introducing characters, ancillary or not. That’s how mindless it is. Viewers are swept up in the lives of a series of New Yorkers, all considered beautiful or popular enough to make the poster art. That’s the only qualification.

The string of stories run the gamut of emotions, from a dying Robert DeNiro, overjoyed teenagers, lonely single moms, feuding pregnant women, and a break-up destined to end happy because Hollywood says so. Oh, and Ashton Kutcher hating New Years Eve because… uh, well, Jessica Biel hated Valentine’s Day in the last movie and it was memorable or something?

There are enough familiar faces here that we could pick up where the last movie ended. Some intrigue may come from the idea of tracking these characters on holidays, but no, this is a do over. That allows Sofia Varga to play the same character she does on Modern Family and Hilary Swank to direct the confetti during the testing phase. Wait. They test confetti?

As an ensemble, there is little connection between the characters. A mystery or two is solved without much in the way of mystery, and Jon Bon Jovi -despite the in-movie relationship with Katerine Heigl- is here to push music, not drama. Hackneyed birthing comedy is stuff best left on the cutting room floor of a sitcom, and every ounce of romantic wit can be seen coming in the first act. Granted, that takes about an hour to put everyone in place, but still. 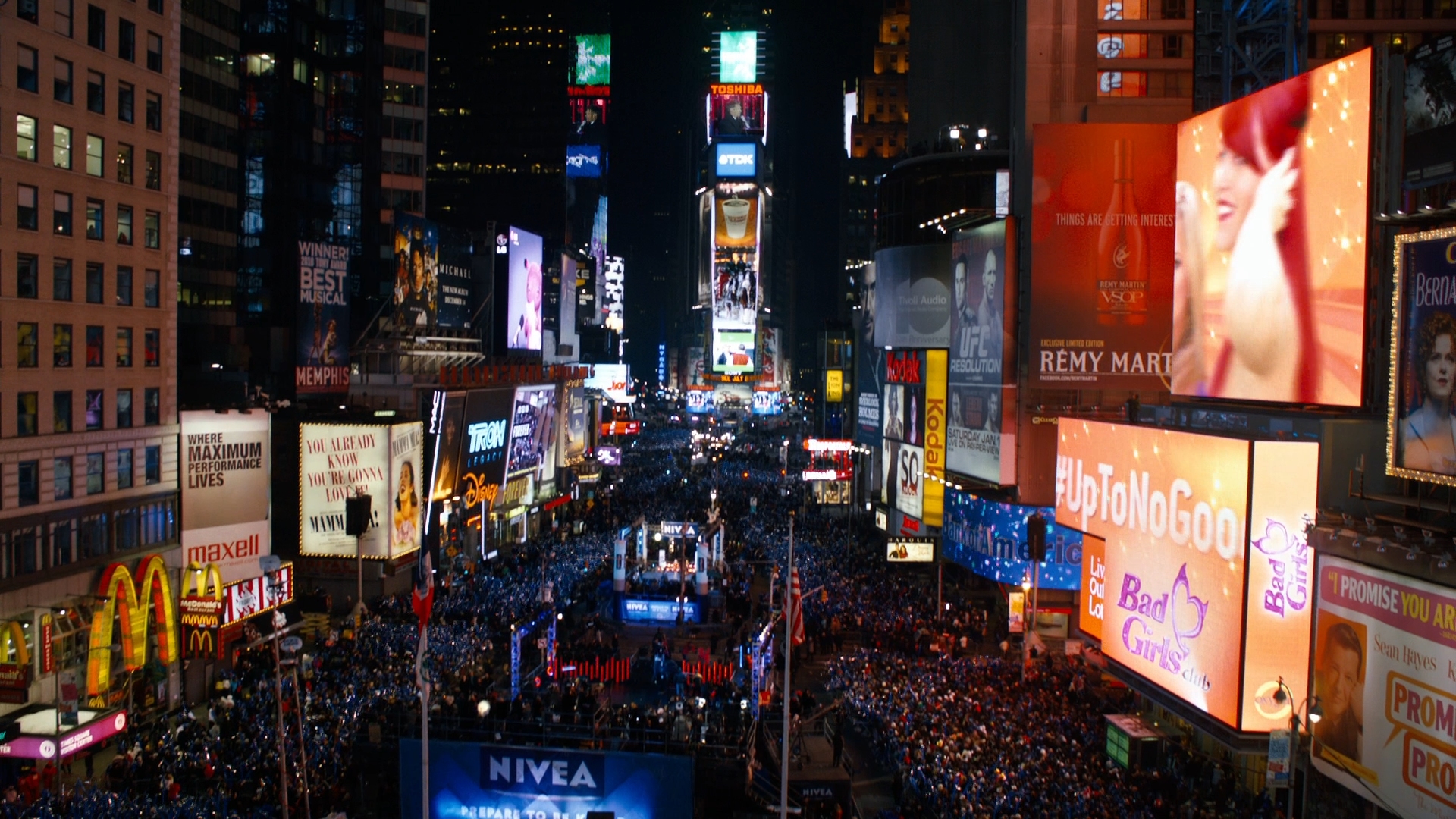 This series (sort of series?) moves from a film stock to digital, with typically pleasing results. Immediately apparent is the window-like look, wherein the viewer is pulled in without any obstruction. That requires a number of things, foremost being a vivid sharpness and color palette where primaries are appreciated. It’s also worth noting that it’s noise free.

That’s what the disc is capable of, especially outstanding as the tested confetti drops with the ball. Any encode that can handle that floating mass of moving objects without any visible artifacts deserves a thumbs up. Core photography can lean a bit flat, close-ups inconsistently producing deep, hearty definition. Sarah Jessica Parker seems especially fond of digital smoothing techniques.

Keeping the depth apparent are black levels performing up to par and then some. While challenged only on occasion despite much of the film taking place at night, nothing feels washed out or faded. During those prime moments of Times Square cinematography, they kick into high gear, elevating themselves against the brilliant lighting.

Exteriors sell this piece better than anything else, including aerials of New York, a church early in the film, and others. Locations are captured with brilliant crispness, and no quirks to speak of. It’s a shame the texture isn’t as precise elsewhere.

There are two live performances in New Years Eve, a spectacular showcase of audio prowess and power. Indoors, Bon Jovi’s lyrics take on a tighter quality, while drums hammer the LFE. Outdoors in the Square, lyrics split themselves up, less focused but certainly more akin to such an open space. Bass isn’t as contained either, another clever piece of sound design.

Anything taking place in an area containing so many millions of people will feature spectacular mixing, or at least it should given the big budget origins. The crowd certainly has the energy for such an event, as do the various parties scattered around town. Mixing creates a sense of being there, if not in any memorable or spectacular manner outside of the musical numbers.

It’s hard to believe no one in this bulky cast chose to join director Garry Marshall for a commentary, but that’s the case. Magic in Times Square is a collection of cast reflections on the shoot, and New Years Eve Secrets details their personal New Years stories. Jon Bon Jovi and Lea Michele Rock New York City covers the musical angles of the feature, followed up with deleted scenes and a great gag reel. If you care, BD-Live support is here too.