Despite impending war, financial struggles, dead parents, thousands of dead soldiers, and slaughtered children, War Horse remains laughably idyllic. Those bright green pastures, smiles all around, and glowing sunsets are outright hilarious given the backdrop, wherein the horse actually finds means of communication. The horse understands human emotion better than most apes, a desperate, forced attempt to make the audience feel something for what is the lead character.

War Horse might be the most artificial piece of cinema Steven Spielberg has ever made, this coming from a man with a backdrop of robotic children and predicted futuristic murder. It’s a manipulative, trying piece of cinema, so desperate to latch onto the family audience it lets British and German forces work together for the horse’s cause.

Maybe it’s an attempt to recapture the spirit of Saving Private Ryan, wherein an entire platoon sets out in search of one man. Here, it’s a boy looking for a horse, but there is none of the gut wrenching violence that portrayed the horror of the battlefield to justify it. War Horse avoids bloodshed for a world view that is anything but sane. There are less human casualties than there are horse deaths, the camera panning to hold on a pit of overworked (and deceased) animals, scanning quickly over a battlefield of dying people. It’s an equestrian fanatic’s worst nightmare.

The film swaps in new characters as often as it heroically portrays the horse, ludicrously so across the middle of a battlefield. Joey, the name given to this admittedly beautiful animal, becomes this bizarre beacon of hope, always in the frame when someone needs inspired or saved, little girls or other horses. Mr. Ed had more credibility in the “horse communication” genre. Flattened heroes are those that care for the animal, cartoonish villains are the ones that don’t. It’s preposterously simple.

War Horse devolves into ridiculous self-parody, laughably awful as it attempts to squeeze drama from sun drenched windows, brilliant orange sunsets, and fairy tale like countrysides. None of it works, the film transparent in how it’s working over the audience, generating false sympathy for a creature that in reality, does nothing. It doesn’t save lives, rescue drowning children, or pull them from a burning orphanage, which is surprising. Joey is simply in the right place at the right time. Substitute another horse and the game doesn’t change.

Come to think of it, in this animal’s wake, a little girl is killed, another young man is blinded, thousands of horses die, hundreds are bombed by the artillery it moves, and financial duress is begun by its mere presence. This horse isn’t so much a hero as it is a bringer of death and misery. 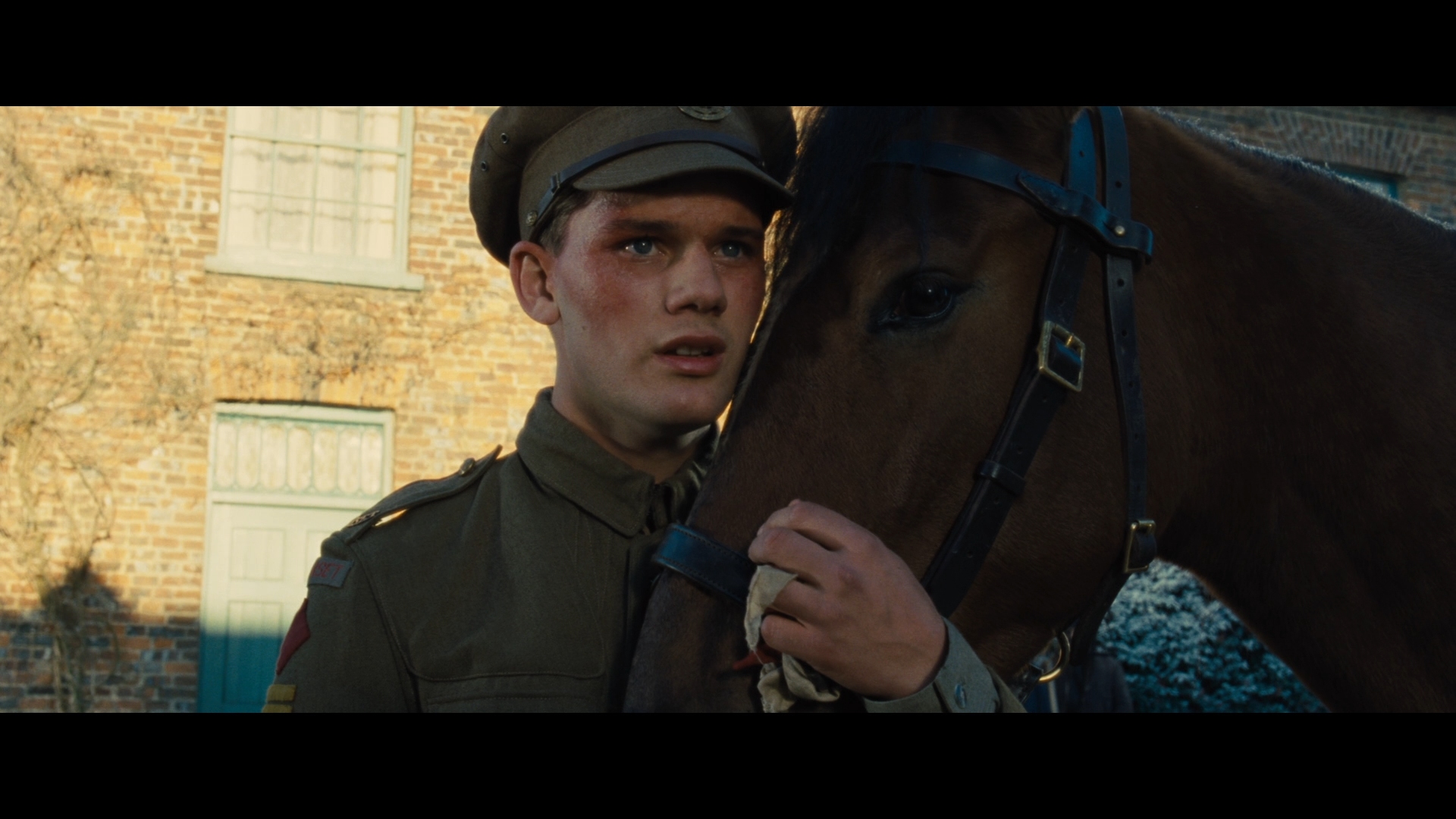 If there’s anything afforded to the overwrought drama of War Horse, it’s production value. Despite a relatively tame budget for a Spielberg piece, this is a glossy, glamorous film-based source. Disney and/or Dreamworks punch out a sterling AVC encode, handling a lightly layered grain structure without any discernible artifacts. Film grain is clean and consistently fluid, never appearing spiked.

Lapses come when the black levels are supposed to up their game, interiors flattened with no push for depth. This is a drastic departure from elsewhere, with enormous power bulging from the frame thanks to the intense contrast. The difference between the locations can be drastic and even disorienting.

Brightness comes with a boost from the saturation, primaries rarely diluted. As the film closes, a deep sunset dominates more than half the frame, forcefully pushing hues of reds and oranges. Those scenes in the trenches of WWI may drown the palette in grayish browns, but they’re intense grays and browns. Even those scenes at night are brought forward with superior backlighting that accentuates the blue haze.

There is no loss of fidelity in the transition to Blu-ray, the textural qualities of the film outstanding. Shots of Joey are precise in how they make his hair visible, and actor close-ups are refined as well as could be expected. Long shots of landscapes or homes are pure, certainly rife with definition. This is a definite eye-pleaser.

For seven minutes, War Horse lives up to the first part of its name. German artillery bombardment is heavy on British troops, the subwoofer sucking the air out of the room as the bombs reach their targets. This is a steady barrage or fire, not simply one or two thumps, but an element at the forefront of the mix. It’s suffocating and chest-pounding. Each blast is predicated by the whirring whistle, which can (and will) travel through the surrounds. Every ounce of power afforded to this 7.1 mix is utilized.

There’s more than seven minutes of spectacle here, the war merely the audio showcase if you’re looking for one. War Horse’s subtle effects, from heavy rains to crowded auctions prove wonderful additions to the immersion. As Albert (Jeremy Irvine) whistles for Joey in the opening act, his calls from different directions, disorienting to the listener and the horse. Car engines are weighted, and gunfire -even without LFE support- is aggressive. It’s the full force of Hollwood sound design.

Two featurettes are offered, a roundtable discussion with Spielberg, his cast, and producers called The Journey Home, plus An Extra’s Point of View, detailing how those minor roles are utilized many times over. That’s all of three minutes.