Mission accomplished. And that was said out loud as it was typed.

It’s joyous, outrageously expensive spectacle at its most pure, and even most useless. Watching Tom Cruise trail the evil Russian (they’re back in style now) through a Dubai sandstorm is ridiculously entertaining. No, it doesn’t amount to anything short of making Tom Cruise dirty, but it’s the type of expensive, car-scratching fun the mass audience pays to see.

There’s probably a little glee in seeing Cruise cling to the side of the Burj -also in Dubai- and narrowly miss as his uber gadgets give out on him. Those a little cynical, or even jealous of the mega-budget crown jewel, probably wish for a full-on drop from the world’s tallest building. But, that doesn’t happen, and instead, with mind-blowing bravery and outright insane safety rope maneuvering, it becomes a high standard for stunt work going forward.

This globe spinner gives the crew a small vacation in seven countries, each giving MI4 a distinct local flavor. Pacing is non-issue, either forced ahead with wonderfully choreographed fights, aggressive car chases, or inherently tense stand-offs with the shady types. A stare down over nuclear arms codes, rushing the crippled team into smart deception work, is captured intensely. It’s already an untrustworthy scenario, doubly so without proper back-up.

Breaking this foursome from their technological base -the four including Simon Pegg, Jeremy Renner, Paula Patton, and Cruise- is a masterstroke of generated fear. For three movies, the reliance on a home base with tight communication is suddenly ripped away from them after a set up during a Kremlin bombing, which, like everything else, is pure spectacle. While MI4 finds a loophole to bring them back into the gadget game for the finale, the film feels half-naked at its center for the better.

This fourth edition isn’t particularly complex, certainly a wide deviation from the original’s spy trappings. There are nukes, a madman, and he’s going to launch. It’s almost too basic for a series that loves to toy with the audience via more than one liners. MI4’s core source of fuel are witty comebacks, although that is what should be expected when you bring Simon Pegg back. His British musings are too delightful not to smile at.

Cruise’s final conflict comes within a super parking garage, juggling a briefcase between motors, cars, and the lead villain. It’s a culmination of the comedic aspects, the tension, and the fiery pacing the film has established. This, as with the other films in this series, feels personalized and unique. They don’t necessarily gel so much as they exist in their own little universe, and it’s one that has been consistently worth revisiting. 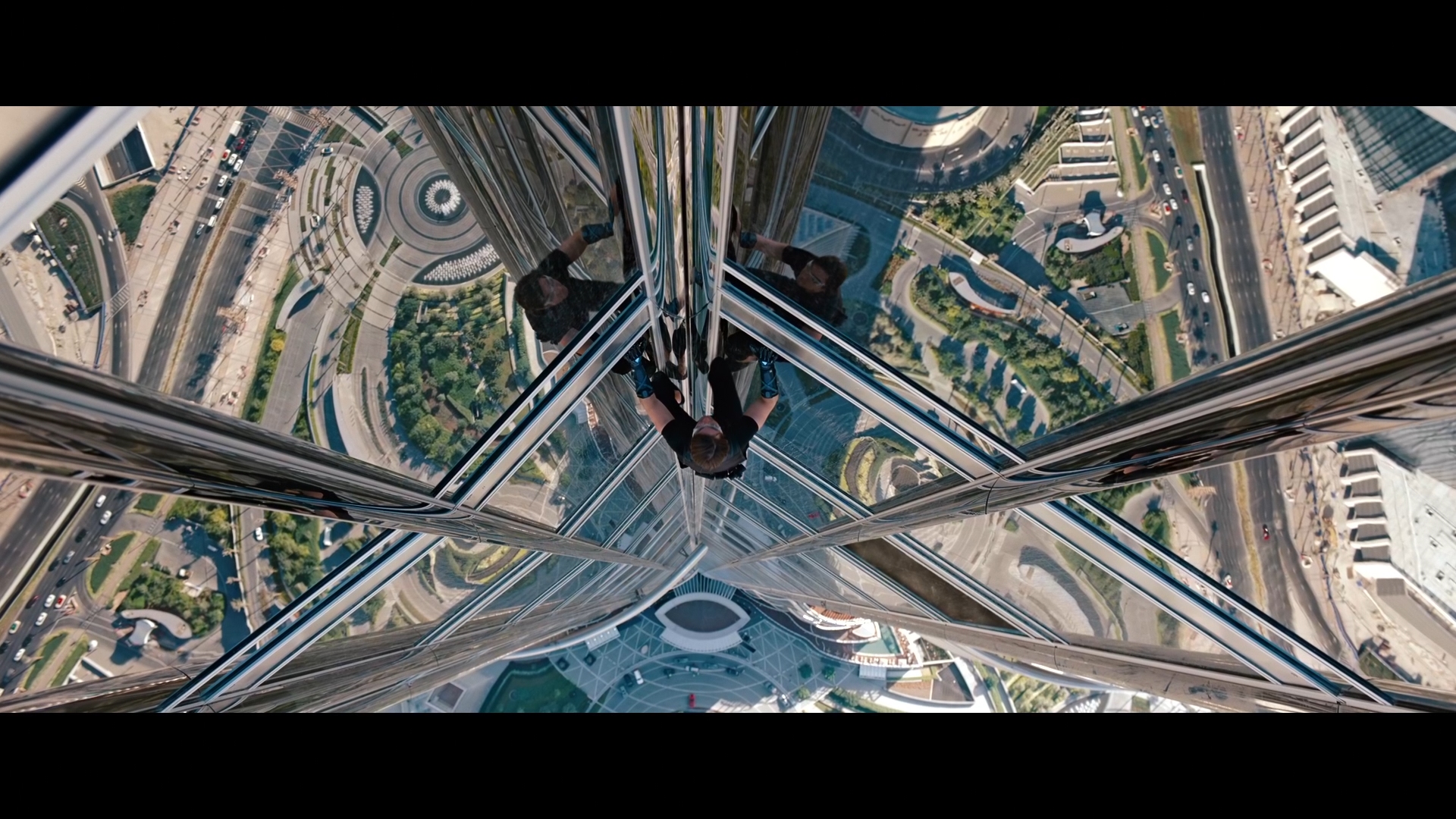 Captured (partially) on IMAX stock, MI4 is stingy about the 2.35:1 aspect ratio. Unlike Dark Knight before it, this is fixed ratio until the end. Whatever the case, the image feels consistent, the half hour or so of 65mm IMAX stock blending seamlessly with the typical 35mm bits. An errant noisy shot from a heightened level of compression not withstanding, the disc feels pure, or rather precise to the source.

Despite being utterly abusive with splashes of teal (almost everywhere), images carry oomph. They’re bright, bold, and intense, a perfect match for the film’s flair. Saturation remains hearty, flaring up flesh tones and accentuating the locations. Aerials of Russia or Dubai appear remarkable, littered with primaries that seem glistening, asking -no- demanding attention. It’s hard to look away.

Other elements bolster the visuals, particularly the high fidelity material. The piece is shot in close with consistency, working the actors and their emotions in tight, stressful scenarios. Vivid lighting captures the pores, stubble, and clothing craftsmanship with regularity. Aside from focal decisions that render the image softer for artistic flair, MI4 offers superior sharpness and definition. That’s the standard for summer blockbusters.

In the first act (and to a lesser extent in the later ones too), the fault becomes black levels. During Cruise’s initial meeting with Renner inside a car, they falter miserably. They lose density and choke on the shadow detail. It’s a weird shift from a tight, dimensional image into a murky, dry interior. Oddly, minutes later in an underwater escape, the piece returns to normal, creating an environment that is dense and refined. On top of it, that’s not an easy condition to shoot either.

In the immortal words of one Inspector Gadget, “Wowzers!” Digging through the thesaurus didn’t bring up anything else deemed sufficient enough to translate feelings generated from this TrueHD 7.1 masterpiece. This text could go on for ages describing intricate inner workings, the marvelous imaging, and endless thumps from explosions, but “wowzers” still says it best.

This a mix that wastes no time, forging ahead with a prison riot that scans punches to deliver them in the proper positional, bellows alarms in the surrounds, and envelopes the scene in music. The balance of each element is remarkable. There’s a lot of that here, although nothing compares to the subtlety put on each action. During a wild, raw cat fight inside a hotel, objects careen through the soundfield, crashing down in the appropriate speaker. The additional two surrounds are not wasted, capturing things as minor as a gun clip being sent across the floor.

Then, there’s the big stuff. Before the Kremlin is lit up, it begins with a deep, earthy growl from underground, resonating tightly in the LFE. When everything goes, it’s massive, and it feels appropriate to the scale of the visuals. It’s spectacle. A powerful sandstorm whips up in the second act, roaring overhead and sending debris flying. The car chase which initiates in the storm is boomy as engines pan, and clarity in the highs as vehicles bump each other is flawless.

Through all of that, and an underwater shoot out that tracks bullets precisely to their targets, the best moment from a technical standpoint is the Burj climb. A mile up, the air becomes busy, pushing against Cruise as it makes a round trip through the soundfield. It adds to the precarious nature of the stunt, while making those views pointing directly down utterly terrifying.

Paramount leaves the film to its own devices on the first disc. Nothing impedes on visual or audio quality. That leaves the second disc to push bonus feature, split into two sections for roughly two hours of content. Mission Accepted are three behind-the-scenes featurettes focused on specific locations and stunts, including that perilous Burj stunt. Footage of Cruise being almost playful while being suspended by only two wires is awesome.

Impossible Missions are 11 pieces with less specific purposes. Shooting on IMAX, choosing a composer, effects in the sandstorm, props, and the prison shoot are included, amongst others. For these and the Accepted clips, the same holds true: they’re wonderfully produced. Although quite high on the praise for Cruise (some might say ego-stroking), they feel natural, honest, and open to the audience. It’s more than face time interviews.

Director Brad Bird details the eight deleted scenes via an optional commentary, the last bonus section aside from trailers. It’s a shame that Bird doesn’t get to chat over the main feature though.