Hop teaches kids that it’s okay to eat rabbit poo. After all, it tastes like watermelon according to the script. Little ones are the curious types, so a bit of an adventure in poo eating isn’t all that different than smearing a pet turtle in green slime and waiting for a ninja to pop out. What? You never did that?

Anywho, Hop sets up its predictable hijinks in the cliched manner of every kids movie. What could possibly go wrong at a job interview after the rascally talking rabbit promises to stay in the car? Right, everything. It probably deserves points for not repetitiously doing the, “It’s a talking rabbit!” routine. David Hasslehoff even comes through with a great reaction, “My best friend is a talking car.” Kids won’t get it, and you’ll come to the realization that you’re old because you did.

Hop deserves some points for being clever at times, some snappy one-liners only drowned out by the insistence on creating scenarios where “hop” is forced into the dialogue. Ugh. But, none the less, as a formulaic animated film trapped in the realm of reality (err, some form of reality), it’s bound to generate some smiles. Endless side characters tend to do that.

The inner-workings of Easter are revealed to all, essentially a more colorful take on Christmas. Instead of elves making the toys, it’s a line of chickens, who are probably none too thrilled stamping marshmallow likenesses of themselves for consumption. The Easter Bunny himself could probably save millions by cutting out the factory workforce and making this whole scheme automated, but whatever.

Outsourcing might have prevented the eventual take over attempt by a rogue chicken, demanding to be donned the title of Easter Bunny, as the current in command finds himself aging out of the role. The Bunny’s current successor, his son E.B., has more of an interest in drumming than traveling the world hiding eggs. The tough, drug-riddled world of the rock star, or the egg-planting life of a rabbit… tough call.

James Marsden stands in as the human role, career-less as he struggles to find his purpose in life. Imagine someone who sits around all day and watches Blu-rays for a better perspective… err, wait.

Since the rabbit and Marsden have swapped life roles, there’s only one possible conclusion. It’s a manic finish with black licorice chewing, egg painting, Hasslehoff advice-giving, and a training montage. Someway, somehow, through all of that, Hop turns itself around to make a human becoming the Easter Bunny logical. Well, co-Easter Bunny. We humans can’t poop jelly beans quite yet. 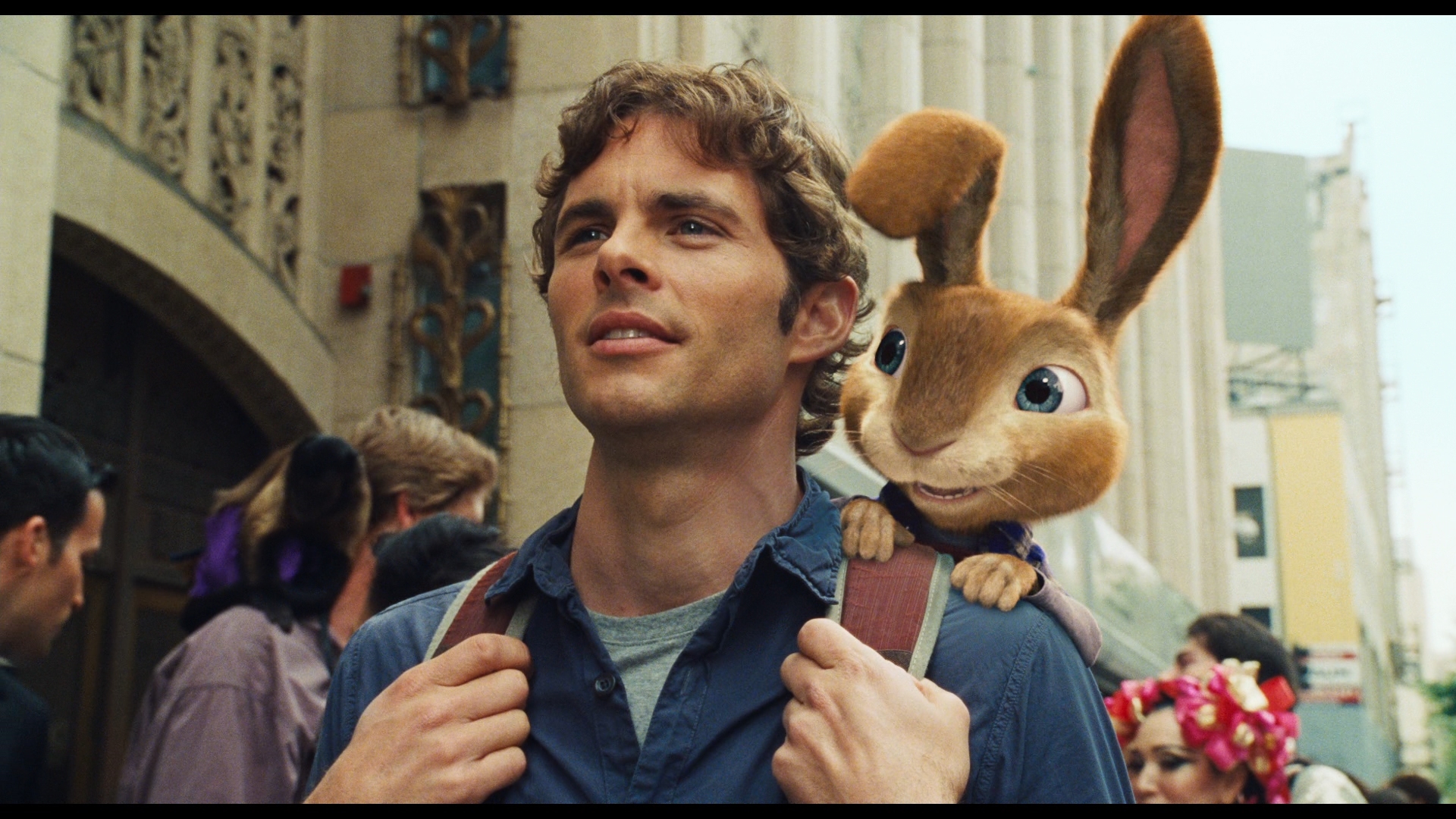 Surprising to a few, this Easter-sploitation spectacle was captured on film. It’s easy to assume with the myriad of CG effects and probable cost-cutting to boost profits, digital would be better suited to the product on hand. Since it’s film, that leaves Universal’s VC-1 encode to pick up the slack, and generally speaking, it does. A handful of shots will reveal what looks to veer towards noise more than a simple grain structure. The detrimental effect on the image is minor.

After all, it’s hard to hate the look of this one. Contrast is overflowing from the image, even blooming out to exaggerate the depth. You could even call it a little blinding in spots, ensuring the image never dulls to risk losing a kid’s attention. Black levels hold their own on the opposing side, never resorting to shadow detail crush or other anomaly. Consistency is important for this one.

Opening in the realm of the wabbits, the factory floor if hi-def magic. Overflowing with intense, saturated primaries and a plethora of shiny, golden machines, Hop doesn’t waste anytime in bringing this world to life. That goes for the videophile or not; it’s beautiful in motion. The transition to the human world is hardly a loss, with spot on flesh tones and deeper hues that accentuate the home exteriors or the Hollywood cityscape.

Rabbits are textured passably, the vivid sharpness pouring from this transfer revealing in ways the animators likely wish they weren’t. Fur isn’t defined so much as it is a mushy blur at times, sapping some of the visual energy. Other times, especially with regards to the chick’s feathers, it’s phenomenal. Facial definition on the live action is staggering too, close-ups exquisite, textured, and natural. Medium shots resolve the minutiae, while clothing is resolved down to identifiable types of fabric. Stunning.

Despite a generous helping of fast-paced action to appease the ADD generation, Hop’s audio mix only has a few scenes of note. The undoubted highlight comes during the finale as the Easter sleigh (no, really) loses control. The sleigh rockets around the factory, spinning through the rears and panning across the front soundstage. Dialogue -more like screaming really- follows the same aural trajectory.

There are minor moments elsewhere, the drop through the rabbit hole early on aggressive. The sounds of the factory sputtering out gummy bears, along with the energetic music, spurs on some enjoyable home theater usage. The whole thing balances well, with poppy drums and vibrant dialogue. There’s an expectation for a bit more, movies for the younger set primed for grand activity these days. Hop isn’t one of them, although hardly a bust either.

Fluff, fluff, and more fluff. That’s the overly full bonus menu here, one of those that chips away with two or three minute features, because sheer volume looks more attractive on the packaging. The World of Hop offers the only stuff worth spending time with, six featurettes focused on the designs, characters, and actors.

Phil’s Dance Party has two of the side characters (you’ll never guess) having a dance party. All Access with Cody Simpson goes through the motions of recording a remake of, “I Want Candy,” likely the 18th remake of said song. Russell Brand: Being the Bunny is a goofy minute long animation detailing the fantasy side of the actor’s journey. Kid Crack-ups has Brand torturing kids mentally, which is cruelly funny.

Carlos on Carlos goes in-character at the film’s premiere. Emotions in Motion is a tongue-in-cheek piece on choreographing the dance routines. Post-coup Commentary lets Carlos and Phil chat about the film, and like a lot of this, all in-character of course. U-Control pops-up tweets from the cast (digital or otherwise) or tracks the Pink Beret’s in their quest to recover E.B. Some games for the children, BD-Live access, and D-Box support (why?) brings a merciful end to this bloated section.