Remember Dumb & Dumber? You know, the Jim Carrey and Jeff Daniels doltish buddy flick? Well, there’s a scene in there where Carrey makes, what he calls, “The most annoying sound in the world.” In fact, here it is for reference.

Listen to that on repeat for 80-minutes and you’ve watched Jack and Jill.

Maybe there’s a curse that surrounds Adam Sandler. The guy has energy, sure. For as stupid as they are, the likes of a Happy Gilmore still offers some legitimate laughs. That could be taken as far as Waterboy before the whole schtick collapsed, but this?

Somehow, whether through sheer desperation or a need to directly knock the Academy for snubbing him during the Oscars, Al Pacino was roped into this mess. It’s not a bit part in Jack and Jill like the Sham-Wow guy, Billy Blanks, Regis, Dana Carvey, Shaq, Drew Carey, Christie Brinkley, John McEnroe, Michael Irvin, Bill Romanowski, the Subway guy, and Bruce Jenner. No, Pacino is a starring role, and below Sandler. Ouch.

There’s nothing here, no driving force or motivation. It’s not all that unlike the other Dennis Dugan directed “we didn’t need a script-fest” Grown Ups. Here, they dressed Sandler up and let him run wild. Any semblance of a story comes from the need to put Pacino in a commercial, one of a number of grating and close up product placements. Jill has to hook up with a love crazed Pacino to make that happen, and cue every modern filmmaking cliché regarding a gender swap flick.

This isn’t Pacino’s fault. Let the guy have some fun, right? He’s clearly enjoying the goofball antics, and no one can say he’s not deserving of a pass on the job. Sandler? He’s shown some heart, some brains, and some talent. Punch Drunk Love and Reign Over Me. This is a clinger, as if he can’t get past these comedies, yet the material well has run dry. It takes the simplest outs, even the Mexican food after effects, and keeps dragging it out past the expiration date.

Here’s the crux of the idea in one scene, and why it’s a dreadful failure: The family is having Thanksgiving dinner. The whole point is to establish the obnoxious demeanor of Jill, despite the character process being completed a scene prior. Nothing that hasn’t already been seen is evident here. From her voice to her inability to understand what’s offensive, it’s direct repetition. Why the audience is expected to suffer twice, not to mention for the rest of the film, is baffling. 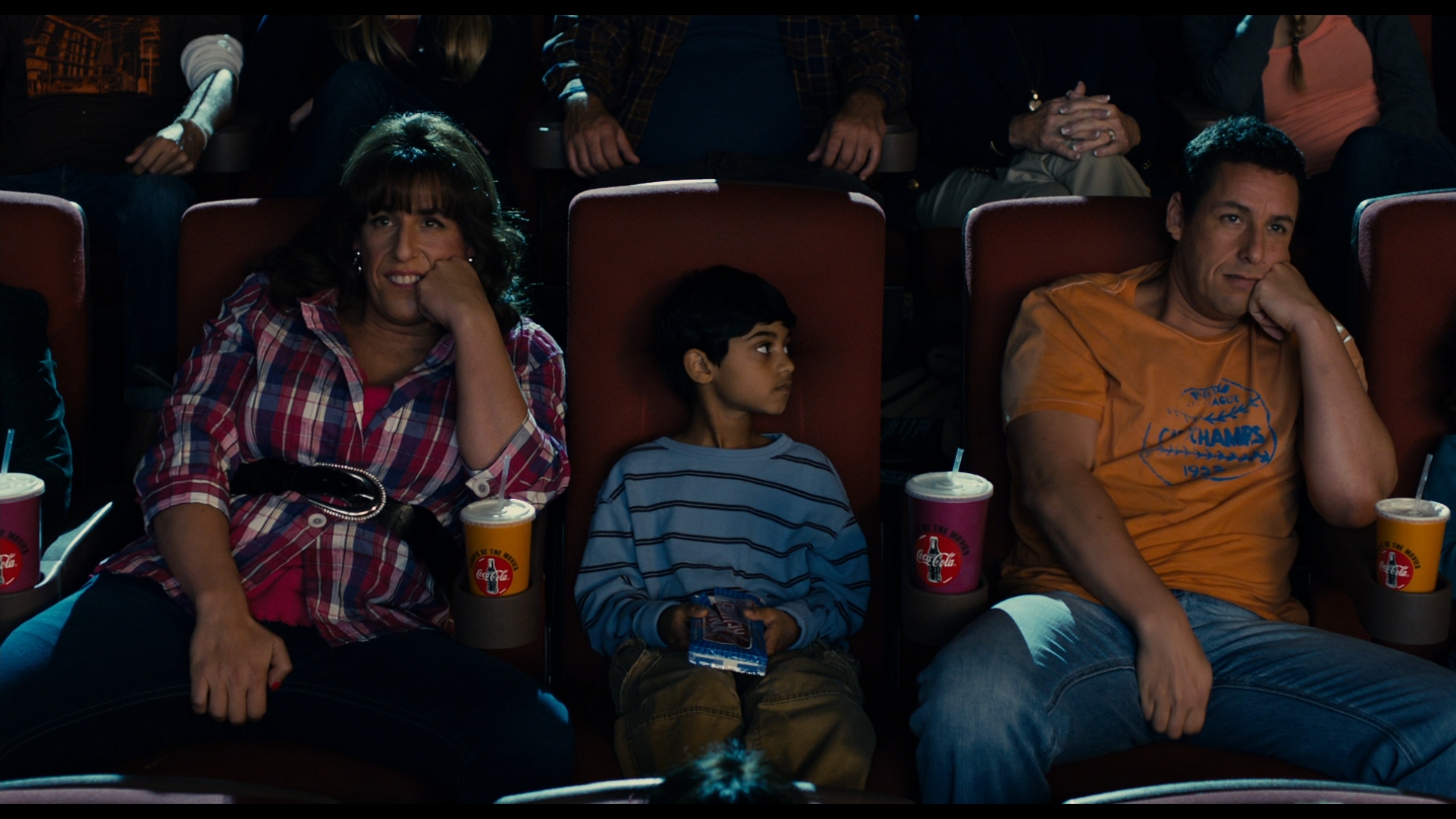 Presented from a digital source, Jack and Jill offers only mild HD pleasantries. Like nearly all of Sandler (and Dugan) comedies, color saturation is blazing. Exteriors of the lavish home pour on the intense greens and vivid blues, and interiors are fitted with objects that load up on primaries. Flesh tones carry themselves naturally with only a mild tinge of orange, never enough to be offensive.

Black levels hold together too, including some nicely rendered nighttime scenes. Shadow detail is handled with enough care to be preserved, eliminating crush. A peppy contrast gives an instant visual appeal without being overbearing. The characters handle that aspect.

Where Jack and Jill stumbles is texture. Katie Holmes seems to have smoothing applied to her face in every shot. There’s not a close-up of note outside of Sandler and Pacino. The rather dull make-up applied to Jill has little appreciable definition, and anything that would push the technology happens in those exteriors. Plants around the home, from flowers to tall grass, are superb. It’s fairly standard digitally sourced material, but no less disappointing.

Nothing manipulative has been done, a shot or two of a cruise ship clearly pulled from different material. Sharpening has been applied to those, but they only last a few seconds. General softness dominates the source, but thankfully it’s been left alone. Or not. At least drastic sharpening would give people a reason to stay away.

As bland as comedies can be, Jack and Jill, shocking to no one, is not an audio powerhouse. One might hope for Jill to explode, yet sadly, she seems stable. The sole moment of aural glory comes during a trip to a NBA game, where the crowd and stadium announcer offer up material for the surrounds. That’s one of the few times they’re engaged.

Dialogue sticks to the center, this aside from Pacino’s stage performances. His words have a little carry over the auditorium, creating a mild reverberation over the crowd. It’s not audible excitement. Barely noticeable musical accompaniment never adds zip to the proceedings, sticking to the stereos. How droll.

A baker’s dozen of deleted scenes run just past the 19-minute mark, while a following series of bloopers offer more laughs than the main feature in Laughing is Contagious. Look Who Stopped By details the endless cameos with brief interviews. Boys Will Be Girls details the make-up and costumes, and Stomach Ache follows Regis Philbin’s day on the set. Don’t Call it a Boat is a commercial for the cruise line disguised as a featurette. Some trailers and BD-Live access finally bring an end to this non-entertainment.