It’s unclear why The Descendants works. I know, I’m supposed to sit here and rattle off deep, philosophical material while delving into the wealth of cinematography-born genius. That’s the job.

But, Descendants defies that, not because of any arching complexities or industry-igniting originality. In the heart of it lies a story, centered around one man burdened with work, a dying wife, two kids he never connected with, an angry father-in-law, and a land ownership crisis worth millions.

Oh, his his wife cheated prior to her coma. That’s sort of important too.

Instead of treating it as direct emotional fodder, the cheating incident becomes internal for Matt King (George Clooney). He’s not necessarily angry, nor is he outright happy about it. Who would be? It sounds stupid to even consider it. In a way that both flaws and opens him emotionally, he uses this knowledge as a means of working through this mountain in front of his life.

It’s not an excuse to get away; well, maybe a little. His claustrophobic existence forces him into uncomfortable rooms, where cold shoulders and secrets further sink his emotions. Maybe running to equally beautiful Hawaiian islands is more for himself. He uses the excuse that it’s for the kids, as much as he deflects when people ask about his wife. The visuals, some where the crew clearly got lucky, only bring warmth to his crumbling mental status.

There’s a line Descendants dares to cross, one of those hair strand-thin lines few dare to. Comedy becomes a refresher and an outlet, King’s 17-year old daughter insisting on bringing her stereotypical “surfer dude” boyfriend Sid along, even to personal family meetings. Things turn south when Sid (Nick Krause) fails to recognize a case of Alzheimers disease, leading to a physical altercation that has all of the dramatic weight behind one punch. Imagine that black eye standing for a brief deflation of that built up anger, tension, and sorrow.

The final shot of the film, with three members of the cast idly sitting down to watch something narrated by Morgan Freeman (which is 90% of narrated documentaries it would seem), fits between those emotions. It’s calming, the storm has passed in a sense, letting everyone return to their lives, even if it’s only one night. Their bumpy ride of tears, laughs, affairs and brief punches has closure. They’ve made it, and the audience wins. 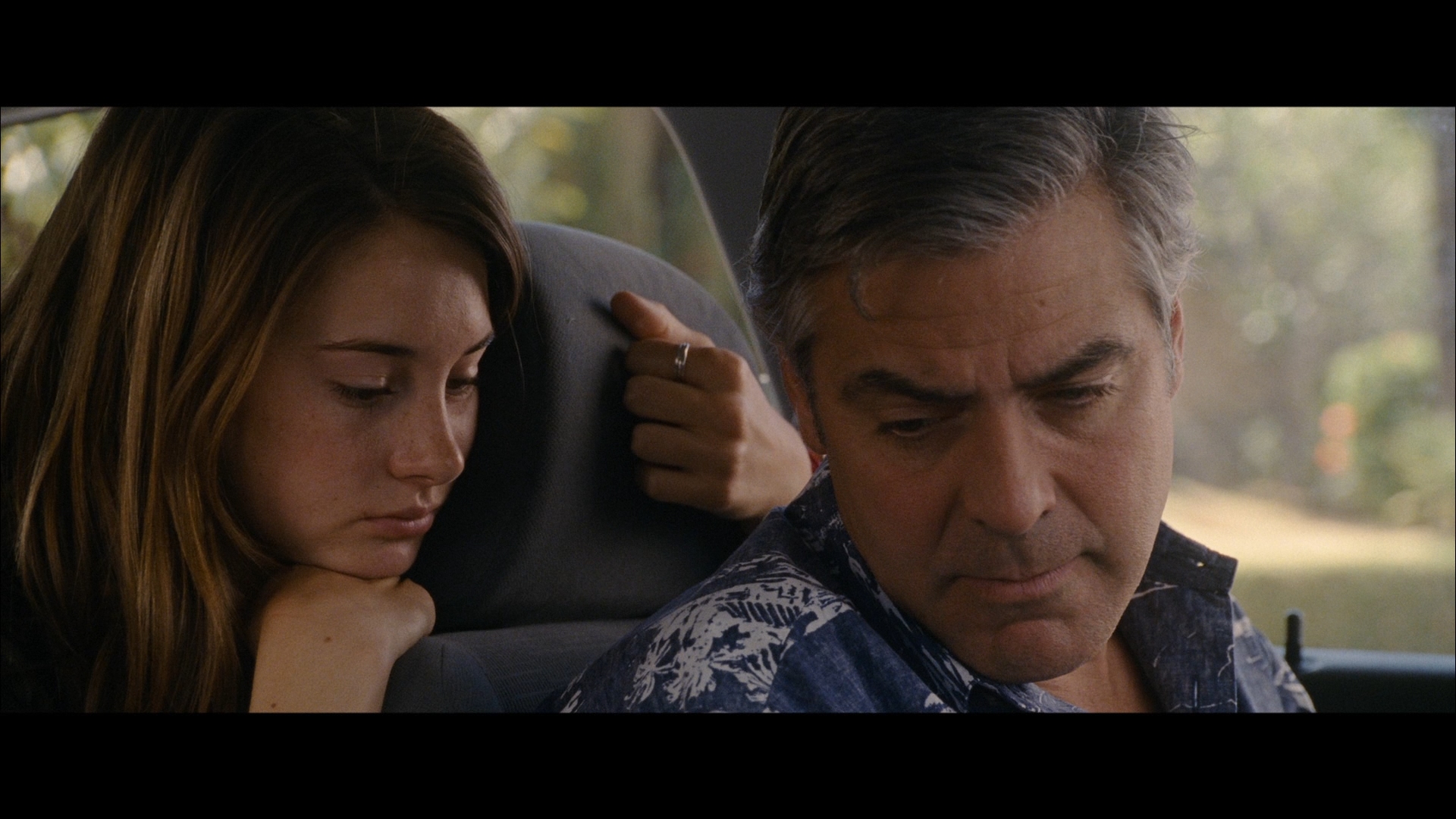 Not a shot of Hawaii will go by without some jaw dropping beauty. From the square acreage owned by King to the exteriors of these well groomed homes, the way the deep color and endearing warmth work together is nothing short of stunning.

The palette is unique in that it rarely plays up primaries, choosing instead to focus on elements of the image and bring those out. The rest never feels desaturated, just slightly out of the image’s center. Flesh tones keep a wide breadth of oranges moving to accentuate tans and the effects of the island’s sun. Greenery is marvelous, bold, and dominating, those rolling hills and lushly packed in palm trees visual bliss.

Fox encodes this film source flawlessly, handling a light and noticeable grain structure. Detail preservation is firm, more so in the third act. Much of the first and second are a little flatter, although never soft. A crisp, vivid focus ensures sharpness, if not the finest of details. The best stuff remains those island exteriors, with waving trees and ocean views.

The sun keeps a steady ozone-battering pace, this aside from a few gloomy overcasts that suit the needs of the material. Contrast thus remains hearty yet never overpowering. Black levels feature one lapse before returning to their pristine existence. You’ll find little wrong with the visual style or presentation.

Descendants isn’t doing much sonically, choosing to keep dialogue centralized even if it’s off screen. There’s nothing gimmicky about it. Mild atmosphere is found during a handful of gatherings, while the majority is produced on and/or near the beach. Soft waves rush in through the surrounds or stereos, creating peaceful moments.

Even the light score, all Hawaiian themes, is too quaint to find any means of pushing into the rears. The strumming of the stringed instruments is clear and peppy, enough to add to the location.

Extras, certainly of the hit or miss type, begin with a series of deleted scenes with text intros. Everybody Loves George and Working with Alexander are featurettes offering nothing but praise. The key issue with these pieces isn’t that everyone had fun, so much as it is that no insight or knowledge is gained. They’re all fluff.

The Real Descendants is a 12-minute history lesson on how the islands were distributed and became owned by those born outside of the land. Hawaiian Style showcases the variety of traditions adhered to by cast and crew while filming. Casting divulges director Alexander Payne’s methodology, including finding people on the street. Working with Water details the struggles to find shots on such an unpredictable environment.

Waiting for the Light seems boring. After all, it’s three-minutes of cast and crew waiting for the sun to come out for a specific shot, but shows the general mood of a movie set between those takes. The World Parade is a short silent film, marginally restored and mastered in HD, that showcases 1920’s Hawaii. A Conversation with Clooney and Payne lets these two sit down and chat about the project. Music videos and a couple of trailers are situated here as well.