It’s hard to swallow that the Three Musketeers (yes, the ones the title might make reference too) take a backseat in their own movie. For twenty or so minutes, they must be waddling around town, downing booze, and acting like fools, all the while the audience is stuck within some political entanglements. Well, that and Milla Jovovich pushed up cleavage.

Summit clearly thought they had something here, the unsatisfying, sequel generating ending a surefire means of seeing franchise potential. The box office says otherwise. Why would they think such a thing? It’s Pirates of the Caribbean all over, to the point that the Paul Haslinger score sounds like a direct lift from Disney’s uber pirate escapades. There’s swashbuckling action (studios love lines like that), ingrained sarcasm, and airships.

Short of the most cynical amongst us, it’s hard not to be impressed by how glamorous and visually scaled the film is. That’s ignoring the opening moments which are clearly contained on a slim studio set, and a cheaply devised cannon assault where the camera shakes to insinuate motion. That’s painful. Everything else is majestic, textured, wide, and soaking up this 2.35:1 frame. Lavish Victorian costumes are the stuff designers dream of, and castle interiors feel scaled miles deep into into the originally 3D panoramas.

Fights are fun too, the bulky, frenzied choreography gifted with clean edits and pristine transitions, not to mention a camera that -for the most part- stays in place. Paul W.S. Anderson can learn after all. Fencing-like duels take place in city streets or in the air, because apparently the Wright Brothers’ ancestors were around in France at the time. Villains are given dashing red and black uniforms, while royalty soaks up the colored fabrics. The Musketeers? Their distinctive, almost rebellious leather signifies their attitude, or something. The whole thing feels a bit forced, if easily identifiable.

Three Musketeers does drag, more suited to a pulpy 90-minutes than a dense 110. Maybe that’s why the flick is so eager to dive into visual effects, exploding with trap rooms, explosions, and flooding before there’s any sense of personality. It could be argued that none of the Musketeers have individual traits beyond the most brain dead of qualities (Porthos strong!), yet that sort of pushes them together in a tightly knit team. D’Artagnan (Logan Lerman) is the only one allowed any personality beyond the core, a feisty, perky newcomer who learns the ropes. At least some elements have survived the original novel. 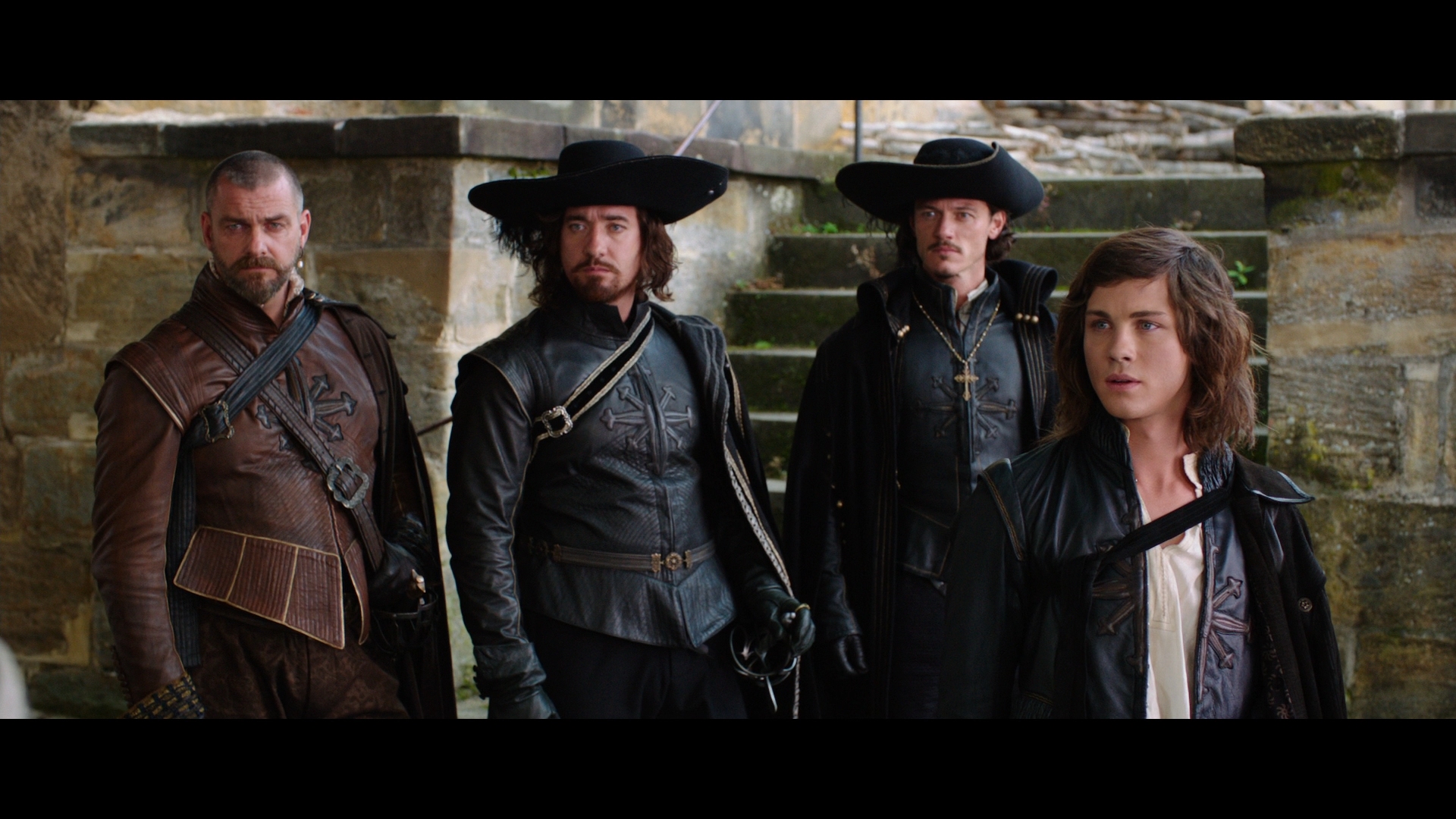 Captured with a variety of currently top tier digital cameras, Three Musketeers misses one mark: facial detail. It has it, just not in medium shots or other complicated scenarios. The source fails where so many digital presentations do.

Everything else? Perfect. In fact, in the scheme of it all, this is one of the grander live action pieces on the format. On point are the costumes, so brilliant in their detail and décor that one can’t help but stare. Better, there are no instances of flicker, shimmering, or other artifact to mar the intense surreal replication of this work. From the frilly to the ludicrously overdressed, the AVC encode holds it firm.

Marvelous compression reproduces those bolder special effect scenes too, draped over computer generated skylines or castles. Interiors are striking, with gold trim, candle holders, and chandeliers fitted with the most minute metal works. It looks antiquated and hand crafted, all of it. That only makes it all the more impressive.

Colors even become a small plot thread, requiring a slight amplification. That doesn’t touch the flesh tones, just the gorgeous environments and again, the intensity of the costumes. From the vivid red cross that dominates the Cardinal’s guards to King Louis XIII’s lack of current style, everything is blooming with saturation. Golds are arguably more vivid than the real thing, and grass is reproduced with an impossibly bright green. Deep primaries line airships, and steely grays will signify the brick work that crafted castle exteriors.

Through it all, the disc holds firm on black levels. Few scenes, short of the opening nighttime raid and drunken introductions to D’Artagnan, will challenge with darkened environments. The film is overly bright and peppy, leaving blacks to merely assist the heavy, weighted contrast. A sense of clarity, with only nominal moments of noise, brings the disc to a top tier status.

There’s a worthy argument that’s likely to crop up that Three Musketeers is too eager to please. Airships roar overhead with a thundering bass, a means of accentuating their size even if the sound wouldn’t come from, well, anything. It’s not as if they have engines. Headbutts are signified with overly dramatic bursts of LFE activity, and even cannons seem overwhelmed by Porthos’ might.

So no, the mixing isn’t subtle, but it is fun. Anytime you’re given a spinning cannon that is the equivalent of a mounted machine gun, you’re bound to have a good time. Add in the plethora of scattering debris, traveling bullets, plus precise echoes and it’s an instantaneous winner.

Even outside of the more boisterous action, sword fights are managed well with an appreciable level of directional clanging. Dialogue likes to travel outside of the center, even if it’s not consistent with it. At times, the design can be a little on the lazy side, going so far as to repeat the famous Wilhelm scream back-to-back. The score tends to focus more on the surrounds than the fronts too, presenting it not with a bleed, but a full-fledged rear fill. Even with the quirks, the overall effect is nothing if not completely satisfying in a bulky summer movie way.

Director Paul W.S. Anderson joins producers Jeremy Bolt and Robert Kulzer for a run through the world of commentaries, but the meat of the disc is Access Three Musketeers, a pop-up feature. The four featurettes, which total a slim nine minutes outside of the pop-up, are expanded during the film’s running time. It’s stupid not to offer them outside of the feature, and studios still haven’t learned. A dozen deleted and extended scenes are offered, finished off by BD-Live.