This review probably deserves some clear, personal honesty: Donkey deserved the starring role. It’s not that Puss in Boots wasn’t an engaging character with potential for a breakout franchise, but Mr. Waffles? Seriously? How can you reject that opportunity? Imagine Donkey’s stories, his clever Eddie Murphy-isms, and daring escapes from being, well, Donkey.

But, Dreamworks plunged head first into the world of Puss in Boots, probably because it has a wider appeal as the cat lover demographic is easier to pull in than ass lovers. Err, wait… Moving on, and swiftly.

This is a fun movie regardless of its spin-of status, maybe a little too energetic from the outset. Puss in Boots is delivering a five or so minute dance off before the base of the story is set into motion. Save the dancing for later filmmakers.

Actually, it saves some too, the end credits given a musical number involving a little of everything, including one of the funnier Jack & Jill interpretations to date. They hold magic beans, and with Puss teaming with Humpty Dumpty (cue the egg puns), they carry a tumultuous relationship through their search. Beans plant the stalk, the stalk holds the castle, the castle holds the golden goose, and the golden goose is owned by the giant. Well, it used to be. He died, apparently from suspicious causes.

Puss in Boots tells a romance and action filled classical Hollywood story, bouncing from an aimless pit of cat-based gags into a fluffy, comfort food type of adventure. Yes, the idea has worn itself thin and sarcastic re-tellings of fairy tales will only go so far. None of them will do it better than the first two Shrek flicks, but Puss puts up an admirable fight.

It’s clear why Puss was chosen after all, a soft-spoken Antonio Banderas playing off a feisty Salma Hayak. That tension and eventual partnership is the core of the film, and while most would never question the life story of an animated creation, Puss at least has the good sense to joke about it. What it lacks in snappiness it makes up for with charms, or at least charms beyond those adorable kitten eyes (but it has plenty of those too). 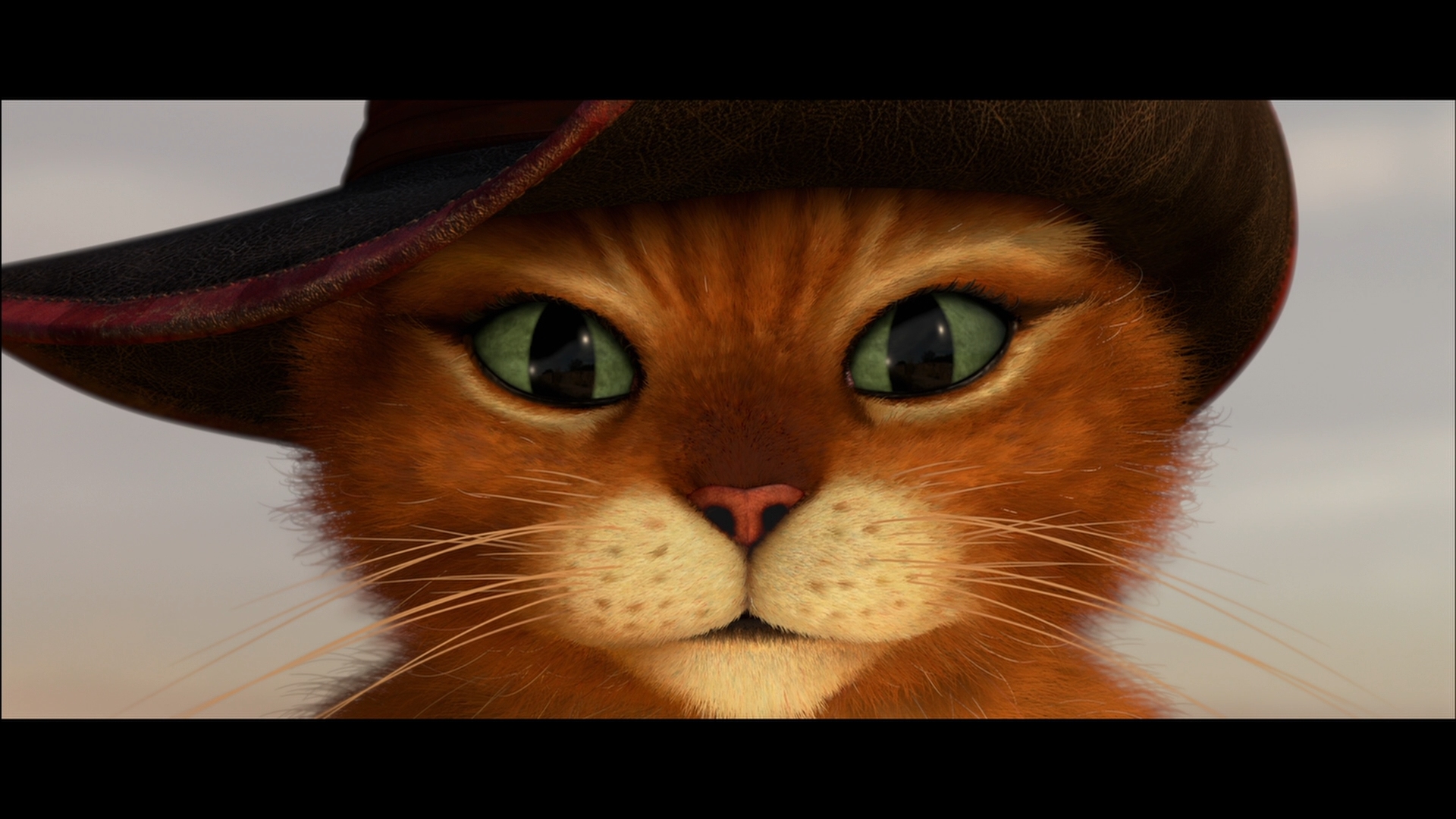 This is the winner for the just made up “Darkest Dreamworks Movie” award, Puss set (for most of the first act) in candle lit alleyways or bars. That doesn’t impede the presentation, and if anything, pours on the intense depth. A showcase for how black levels should be done, the dimensionality is supreme here, exquisite in its capture of shadow detail.

Textural definition is sublime, from the dried leather of Puss’ boots to the fur on the animals. Short of the whiskers, which on occasion display a hint of aliasing, this is a stable, precise, and clean presentation. From those dusty deserts to the bouncy clouds, Puss does a marvelous job of creating spaces that feel natural despite a fantastical facade. The Blu-ray doesn’t falter in maintaining that look.

Shots of the town or landscapes are marvelous, sprawling views that reach a peak of demonstration quality and don’t come down. It’s so crucial to maintain this slightly skewered reality down to the slightest detail, with Puss’ world more human than the swamps and castles of a Shrek. There are just enough of those cues to signify the fantasy without losing the textured realism.

Saturated with cold and warmth, either way the disc will pop with a slew of vividly bright primaries. Some of the visuals will outdo the expectations, especially those blazing sunsets so well suited to this story arc. Those oranges are full of life, and capture the warmth of Puss’ home. None of these shots are marred with banding or other compression faults, a pristine image that, probably shocking no one, is pretty much perfect.

In terms of the 3D presentation, it is less so. While there are plenty of swords pointed towards the screen, cats leaping forward, and a great sequence with a giant goose, those moments are scattered. Much of Puss in Boots is stuck in general darkness, street lights offering little opportunity for background depth by design. Plentiful shots fall apart with little depth to offer.

This is hardly a total loss, just a slight one. Substantial moments are definitely there including a fun canyon chase. General stuff like Puss’ hat carry a nice sense of dimension. Humpty carries a nicely rounded quality, and the characterizations of humans can often mean noses being pointed right at the viewer. All of that is tremendous. It’s a shame that first act can be such a downer.

Busting out with a TrueHD 7.1 mix, the precision imaging is the heart of this constantly active ride. There are countless moments where the soundfield fills just because. It’s the subtle explosions of fireworks that serve as a backdrop to the opening chase to the grand crash that closes the final action set piece. It’s a spectacular series of book ends.

Audio is used to create an unseen monster once on the beanstalk, pushing away foliage and stomping around. Without ever being visible, the creature has a place, a size, and a generated sense of fear. It’s spinning in location with precision, sort of an always there presence that dwarfs the characters, not their dialogue.

That’s what works for animated fare, the ability to place sound effects with absolute precision. When it’s used, certainly in this capacity, the film feels complete, bulky, and falls out of a 2D (or even 3D) shell. The movie exists outside of that screen, and consistently so.

The only downer is bass, which seems to take a glaring number of nights off. It’s not always there when it should be, such as the attack on the town near the end. Footsteps of a massive goose should be thunderous, yet they barely register a whimper. For all of the work done to create a soundfield, that low-end should be bursting at the seams, at least more often. When present, say the chase in the horse carriages, it’s golden.

Extras are split into two sections, one of them exclusive for Blu-ray. The Animator’s Corner, a pop-up feature (to go along with a trivia track) is worth your time. This lets the crew discuss the piece in a scattered commentary of sorts, along with visual reference. Not so exciting is a game for the kids. Moving onto cross-format extras:

Purr-fect Pairing is as general as these actor profiles can be, about as fun as learning the dance moves motion captured for the movie (in other words, not at all) in Glitterbox Dance Off. Klepto Kitty tells the real life story of a cat burglar -yes, an actual cat- that roams the neighborhood stealing whatever it can find. Three Diablos is an animated Puss short, and to Dreamworks’ credit, it’s in 7.1 as well.

Everything else is aimed at the kids, including some songs, a virtual pop-up book, and comparison game. The usual round of trailers are offered too.