Sometime between the release of Twilight: New Moon and Breaking Dawn: Part 1, somebody crafted an internet meme. It showed Carl and Ellie from Pixar’s Up, with a caption that went something like, “Up told a better love story in three minutes than Twilight did in five movies.”

What it failed to mention is that Up also pulled it off without words, merely emotion. What that meme did, beyond make a point, was become a vision into the future. For 45-minutes, Breaking Dawn wanders aimlessly, hopelessly caught up in what it believes is a romantic interlude. Instead, it’s a flood of pop songs that a corporation paid to gain impressions, mindless gibber jabber about who is love with who, and zero plot or fiction development.

Nothing in the first half of this movie needed to be shown or told outside of a montage. A disgruntled fan edit could trim this entire section down to five minutes, slap a song on it, and basically tell the story of Up, well, minus the actual feeling. This is what happens when one studio finds their fiction necessitates two films as a closing piece on a billion dollar franchise. Copycats come crawling out of the woodwork, and shocking no one, the impersonator is never as good as the original.

Between the arid, vapid performances, Breaking Dawn does have a loose story to tell. There’s a pregnancy, which sadly does not turn into the greatest episode of Maury Povich ever. Bella (Kristen Stewart) is stuck turning impressively thin as a baby saps away her nutrients, quite possibly the sole memorable special effect of this series. Bella’s frail cheeks and bony structure are legitimately unnerving, at least until the CG wolves come in to ruin any illusion of reality.

Breaking Dawn hops around standard territory; Twilight fans apparently don’t want things to change. Jacob (Taylor Lautner) and Edward (Robert Pattinson) still fawn over this emotionless girl, although at least this is miles away from a high school. Now it’s all contained in the Cullen household, Stephanie Meyer quick to think when writing the book. Singular locals means lower budgets and higher profits for all.

Most of the money seems to have been dumped into the wedding sequence, lavish (and undoubtedly splinter-laden) seats, flower dressings, and visual filters all employed. It’s amazing that for all of its fanciful, dreamlike qualities, no one explains how they found a priest to perform this ceremony. The gay community still fights for equality while mixed breeds of vampires and humans wed at will. This world truly isn’t fair.

There’s more feudal werewolf/vampire nonsense that never found fictional traction in the first place, flashbacks, shirtless-ness, a fight here or there, and a clip from Bride of Frankenstein, which (for the record) was also a better love story than Twilight. 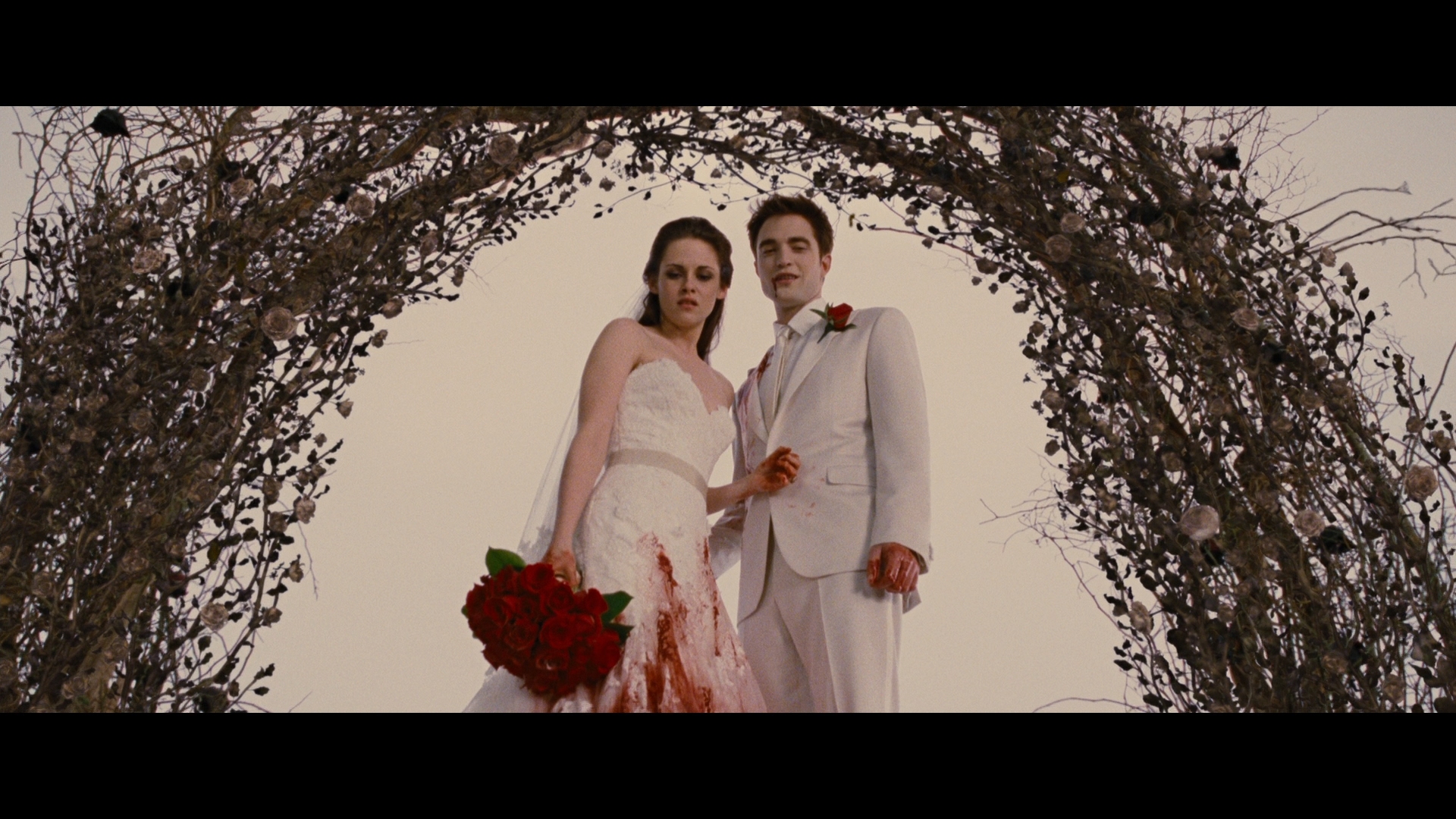 Breaking Dawn is more than a little filter crazy. Instead of a flatter, pale make-up, vampires are dulled with digital processes. It’s a consistent effect, aside from those panning close-ups where fine detail seems to seep in inadvertently. It’s as if they were rushed during the process to meet a specific release date while the franchise was still hot… weird. Medium shots are disappointingly frail and restrained too, and not just with the vampires.

As with the rest of this series, this Summit AVC encode comes from a film-based source. The stock is fine grained, resolved as well as it could be. The few glimpses of a grain structure can be counted on one hand. It’s so limited there are times when it’s easy to be fooled this is digital material. A stray moment of noise is nothing to be concerned with.

This is, by far, the saturated entry of the franchise. While other Twilight films were color corrected to match Stewart’s droll mood or singular facial expression, this is the first time saturation plays a definitive role. Colorists almost seem confused, flushing the flesh tones with a vivid orange, if only to accentuate the pale look later. Momentary shots of Edward give him the trademark pasty face, yet leave his throat alone. It’s as if a small section of him shows life. The true benefit though are those instantly recognizable forests, now lush plus overloaded with appreciable greens and plentiful earth tones.

Black levels can be a bit tipsy, wandering off during a handful of shots where lights are removed from the sets. In other words, they tend to leave when they’re needed the most. A dry contrast is serviceable, at times brilliant, other times almost lost to the dimness of the image. This is arguably the most inconsistent looking movie of the franchise, if only because of the methodology applied.

A vivid DTS-HD 7.1 mix adores these locations, filling them with ambiance and natural elements. It can be tough to appreciate the little things in a series where wolves battle vampires in preposterous ways, but those elements exist. The two additional surrounds do not go unwasted, instead filling with audible cues and minor immersion. A sorrowful score will swell as it needs to, immediately too as the opening frames begin firing off. An impressive rain effect is accentuated by the music and that instant shirtless-ness.

Miniscule pieces are employed to create a full-bodied mix, Breaking Dawn the type of film that toys with audio concepts that can add life to the visuals. Wolves begin speaking to each other mentally (whatever), the mystical effect able to fill the soundfield with their voices, not merely pop from the center. Dreams and other visions will break off from the fronts and become situated in the surrounds for support, capturing the foggy, unclear ideas being presented on screen.

Finally (and it takes a miniature millennium), there’s action. Wolves charge and are knocked aside with weight. The LFE is generous in its usage as these creatures are bumped off their feet. Even their steps are emphasized with a little oomph. Even if the effects are shaky on their best day, audio design slips in to salvage their scale.

Even though there’s bound to be super duper Twlight home video collection down the road (and just pray to whatever it is you worship they don’t re-release these in 3D), Summit’s feature slate is noteworthy. First time franchise director Bill Condon goes solo for a commentary track, adding to the insight that is brought in from a nearly 90-minute making-of, Love, Death, Birth. While clearly on the promotional side, there’s enough behind-the-scenes footage, anecdotes, and design material to give it a pass.

Jacob’s Destiny covers the character arc that took five movies to happen, which more or less turns it into an awkward 90-degree character dive, not an arc. Bella & Edward’s Personal Wedding Video is made up of on-set footage and in-character wedding wishes.