Don’t Be Afraid of the Dark is one of those, “No one will believe the kid” movies, where for 80-minutes, a little girl is subjected to tests, medications, and misguided parenting. She’s being tormented by little creatures, the parents believing she’s responsible for everything.

For the most part, you can side with the adults. It’s not everyday your gothic home is invaded by some spiritual entity or teeth-bearing munchkins (unless you’re in a movie). Once the groundskeeper is maliciously stabbed with scissors, has his tendons ripped, and his eye gouged out, it’s time to think the kid is right.

But they don’t, the arguable parenting duo of Katie Holmes and Guy Pearce more concerned with the restoration of the house than with the little one. That gives Bailee Madison screen time for a screechy yet spot on performance as she bats away the dungeon keeping critters and goes nuts with a Polaroid. Good thing the flash still works; they hate light.

Effectively, you have a Gremlins movie sans the rambunctious, colorful leads. Instead, they’re intent on stealing kids, or their teeth. It’s a carry over from an early ’70s TV movie this it’s remade from, because remaking books or other theatrical movies has clearly run its course.

So much of this film feels routine that there’s a hope the kid will get taken away. The endless streams of attacks are mindless and repetitive, while the creatures go unexplained. It would be interesting to see their dwelling or the kid make some heroic escape from their clutches, finally smacking her parents across the face for being morons.

Instead, the slow creature reveal and set design is presented en masse, setting up for an impossibly ludicrous ending where someone is sucked down into the ash pit of these monsters. The reaction? To stand by and do nothing as the survivors hug. So, what, no one has a rope? No one could call authorities and say, “Hey, so and so is stuck in the well!” It’s remarkably anti-climatic, a total dud of a character wash out and even worse logical scenario. Don’t Be Afraid leaves audiences with a sour taste, and everything before that was bitter. 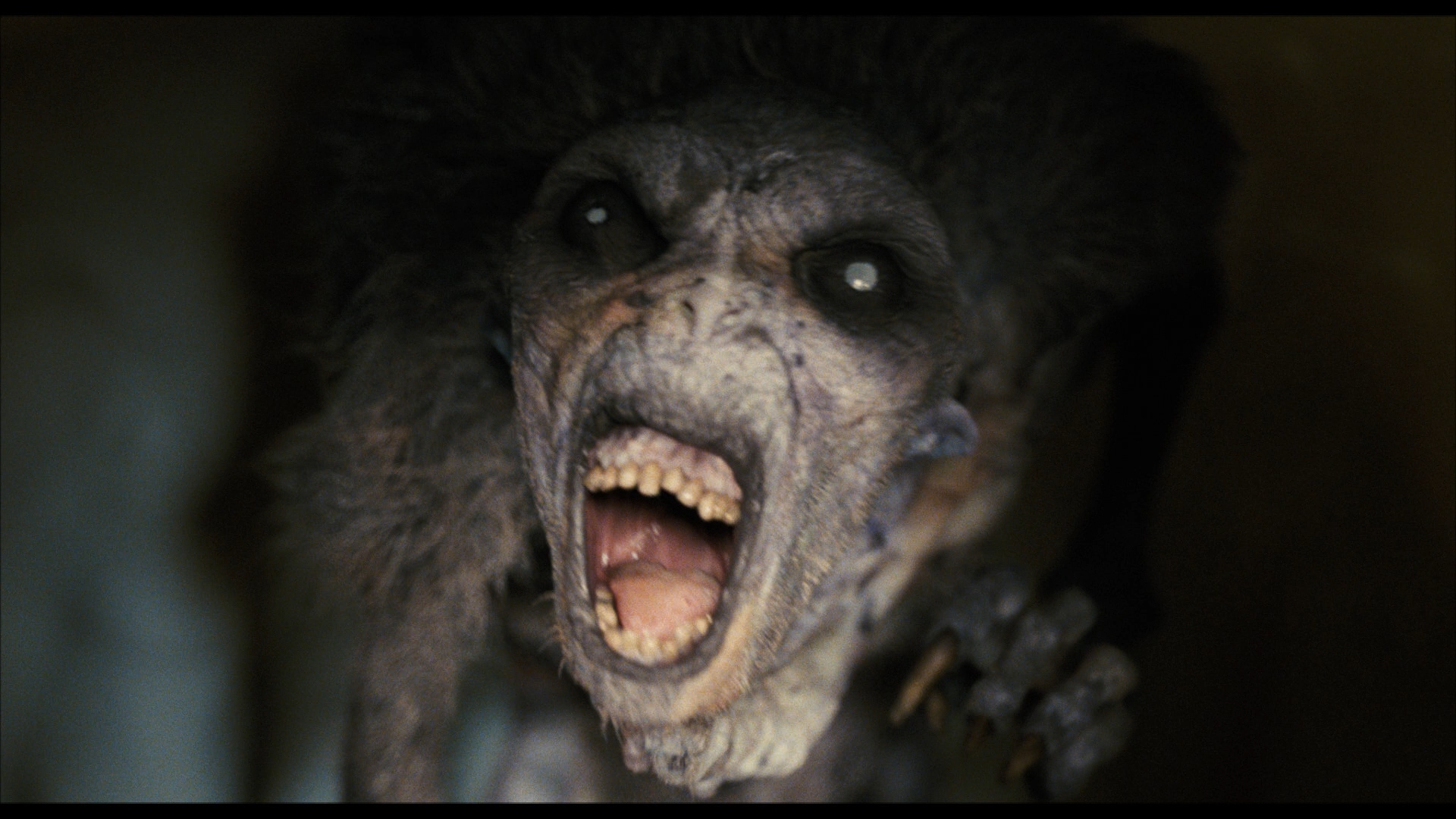 If anything here is afraid of the dark it’s the shadow detail. Under lit sets create a devastating case of black crush the disc can never fix. That’s the photographic intent. There are frames so dominated by the blacks, it looks as if nothing is actually happening. You’ll have to squint to find even the most essential pieces of the frame. Even one of the best aspects of the movie, the interior home with the vintage, Gothic design is lost.

Exteriors show what this could be on its best day, a deeply saturated and intensely focused presentation. The winding garden that covers most of the property is a Blu-ray darling. The richness of the brush, trees, and grass is a true marvel. Debris on the ground including stray leaves are meticulous, and the wealth of color increases their ability to spring to life.

When there is light, interiors can work on a similar level. Close-ups, even of the young Bailee Madison, can provide a level of high-fidelity detail evident in the best of discs. The problem is that will require the light, and there’s little of it to be spared here. The dark has more personality than most of the characters.

This one is shot with a typically intense focus, never going off course or soft. Sharpness is certainly one of the most positive attributes to take away from this one. Film grain is all but absent, another one of those partial black level casualties, while the encode renders what is left with no visible concerns. This one is a bit clumsy, but it has merit.

Sonically, this DTS-HD mix does its best to bring viewers into the action. The creatures are prone to scurrying about, effective imaging sending them into each available channel. There’s a swarming mentality to the design that is still conveyed in the home environment. For more specific, focused attacks, those are placated with toned down effects, keeping it a little more close to home, if no less involving.

This is a horror movie that tends to overcook things a bit though, the bass jacked up to compensate for a legitimate lack of tension of fear. When in doubt, shake people out of their wits. Balance is out of whack for nearly every action scene by a few decibels, loud for the sake of it. Dialogue doesn’t have the brightness to match up, although its amped up during the creature melees to mix well.

There’s not much else to this one, the house spaced enough that dialogue should travel a little. Door knocks and such do. An opening snippet in an airport carries some audible energy, and then it’s all basics from there.

Don’t Be Afraid is a stupidly unimaginative title of the three-part, 21-minute documentary that details the usual round of production anecdotes, design, and influence of the source material. An art gallery, trailer, and BD-Live access are left, not exactly a thrilling outing for behind-the-scene material.