In Time takes place in the future, not in some alternate reality or on a different planet, so it begs the question of who ever allowed this societal system to develop. People live -literally- on borrowed time after they turn 25, a clock implanted into their arm indicating their lifetime guarantee. They’re born like this because of engineering, but why? What purpose does this serve? Why would someone create this system without life-saving safeguards? Who would have voted for the politicians to allow this to happen?

It’s a litany of endless questions, none of which writer/director/producer Andrew Niccol cares to answer. In Time seems almost casual about its portrayed lifestyles as it bounces from one action scene to the next, slowing down only to clog the narrative, not clarify. This menagerie of mobsters, non-subtle jabs at the rich, Bonnie & Clyde styled bank robberies, and modern Robin Hood charity never places the viewer in the world.

Instead, the idea is to rush in, audiences jarred as Justin Timberlake celebrates his mother’s birthday, played by an equally young Olivia Wilde. One can only imagine the teenage angst of having a permanently 25-year old Wilde as your mother. The importance here is placed on action and chases, not to mention the narrative that never solidifies an endless potential of possible conspiracies.

In Time becomes a movie more about what it should have been than what it is. The idea is too limited in scope, the ebb and flow of the piece so weighted on the third act, everything else is distressingly boring. Hints of a possible deep connection to Timberlake’s father is dumped, only brought back for emotional convenience, the script finding it more important to insert additional time-based puns rather than logic.

Floundered too are the moral concerns, those ethical issues of treating life as a currency. They’re skirted, almost as if the studio found the subtext too debilitating, or Niccol didn’t create anything other than a surface level piece. Cosidering Niccol made the richly nuanced Gattaca, the cause seems more obvious. Time is no different than money, but merely changing the form of currency and not doing something with it doesn’t alter anything. Without the ethics, it’s all too easy to rewrite the film and replace most references to time as money, a total failure to hone in on the crux of the imaginative concept.

Think of it this way: What if In Time rewound itself? Center the story around the creation of the idea and the corruption involved as the super rich fight for what will be an easy ride to immortality, while convincing the lower classes they can possibly live forever. The creator of the technology realizes what he’s done and begins an underground resistance to reveal the truth. People still have money, but it becomes a realization of life’s importance for all, not just those that can afford it.

People should be fighting for their life, not looking at their arms and waiting for it to end. 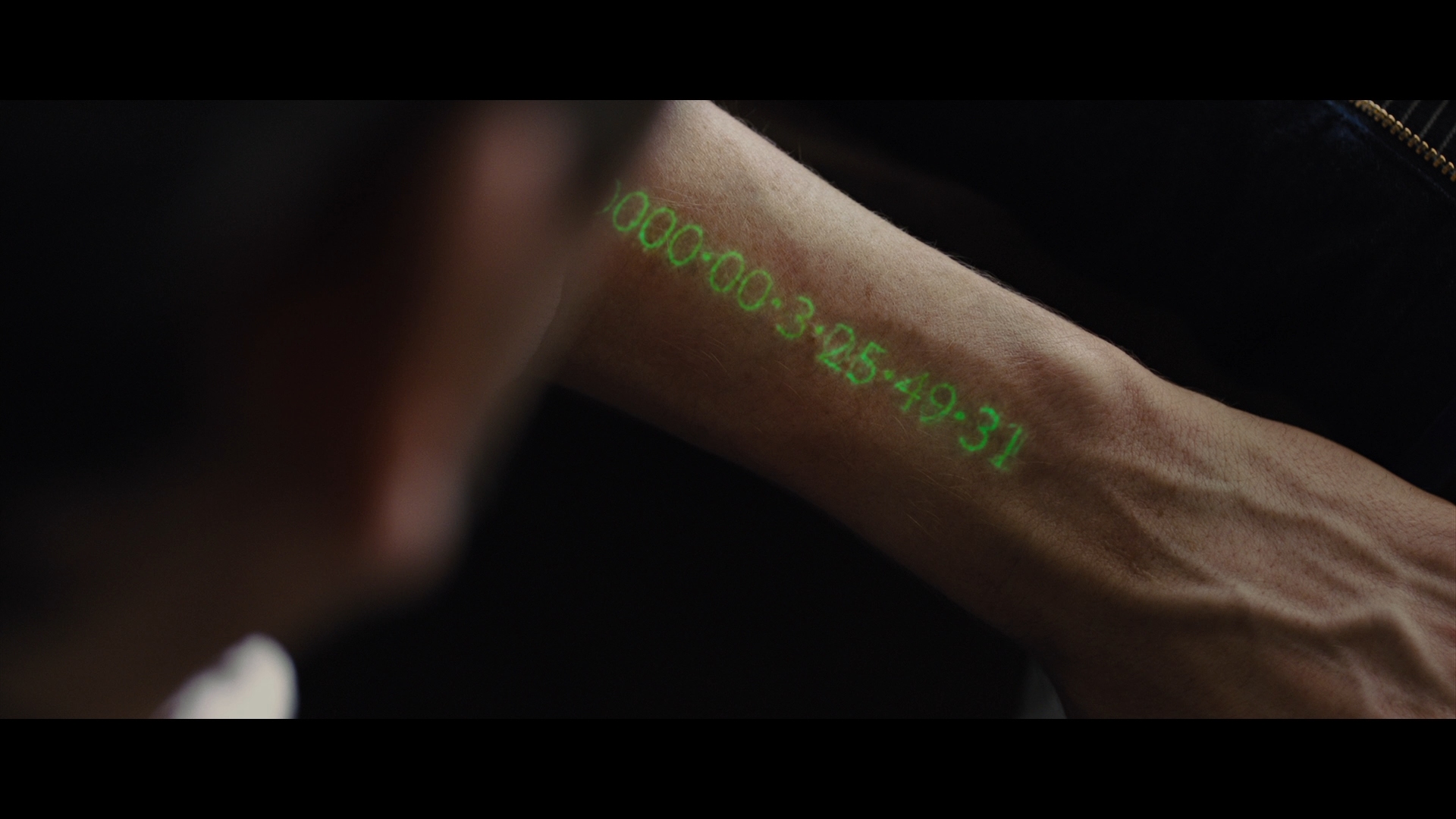 This is a blistering digital production that turns a little shaky in the back half, but maintains composure for the strong finish. The qualities here veer towards extreme clarity and brilliant sharpness, the latter bringing forth extensive definition on the majority of close-ups. Without any grain structure taking away from this AVC encode, it’s free to resolve miniscule texture and brilliant environments. Art designers will appreciate their work being showcased so lavishly.

In Time’s palette is a toss up, the early stages portraying a pleasing reality with minor saturation. Moving into the upper class, warmth fills the image, knocking out natural flesh tones for something that burns the skin. When it’s over, the dramatic shift turns In Time pale, working away from those heated interiors for something that has cooled off and lost it’s appeal. It’s a fun representation of the narrative’s mood, and keeps things off-balance in a proper way.

Black levels will come in fierce, initiating a weighty sense of depth that gives the piece a firm sense of visual energy. Dimensionality, already aided by the level of intense detail, is completed as shadows wrap themselves around the frame with plenty of life left to give. They hold tight, even during a dramatically emotional nighttime run depicting a fight for more time.

None of the digital caveats are apparent either, fine lines strict and backgrounds clean. Banding is avoided, and medium shots are, in general, precise enough to gain a generous pass. This one stays in focus, photographic tricks kept to a bare minimum. By design, it’s meant to look razor sharp, and the encode doesn’t make the transition to Blu-ray (from a 2K source) any more difficult than it has to be.

In Time’s gunfire is memorable. Not in an Expendables kinds of way as machine gun is sprayed everywhere, but in that every shot matters. Every bullet pops from the barrel with vigorous bass, slamming not only the low end but the surrounds as the shot echoes.

Actually, echoes are sort of In Time’s thing. It cherishes open interiors, spreading the dialogue wide with a subtle but unmistakable atmosphere. That happens more than once too; it creates a soundfield-driven environment whenever it has a chance. From the interior of a factory that feels almost too brief for an audiophile to street level ambiance, In Time is mixed with care.

What’s left are the action scenes, typically a car chase with vehicles imaged into the stereos or panning around the back. Tires squeal based on visual positions and bullets, where needed, are precisely directional. There’s a grandiose moment as a car slams through the front of a bank, shattered glass sent everywhere and the initial burst is a subwoofer busting moment. Great design, if a little sparse based on the pacing.

Fox does not provide screeners on time, or not at all. As such, this is based on a DRM-riddled rental copy that barely allowed for any of those screen captures to be taken at this time. How wonderful.