Changing sensibilities turn Godzilla into something remarkable: a sedate, even quiet giant monster film meant to horrify as often as it’s meant to shock. What on the surface comes across a Japanese retelling of the Beast from 20,000 Fathoms or King Kong brings the perspective of a country still reeling from American atomic bombings.

Whereas US-made monster features used atomic weaponry as a catalyst or a diversion to set things in motion, Godzilla itself became the bomb’s embodiment. Draped in silhouette and mindlessly crushing structures deep inland, this was a soulless killing machine. Godzilla didn’t have a personality; its remarkable feature was how well it destroyed without needing one. Aimless, undying, and without remorse. It’s hard to imagine any creation more terrifying.
Note: Gojira was previously reviewed via Classic Media’s Blu-ray release. You can read the full text review via that link. 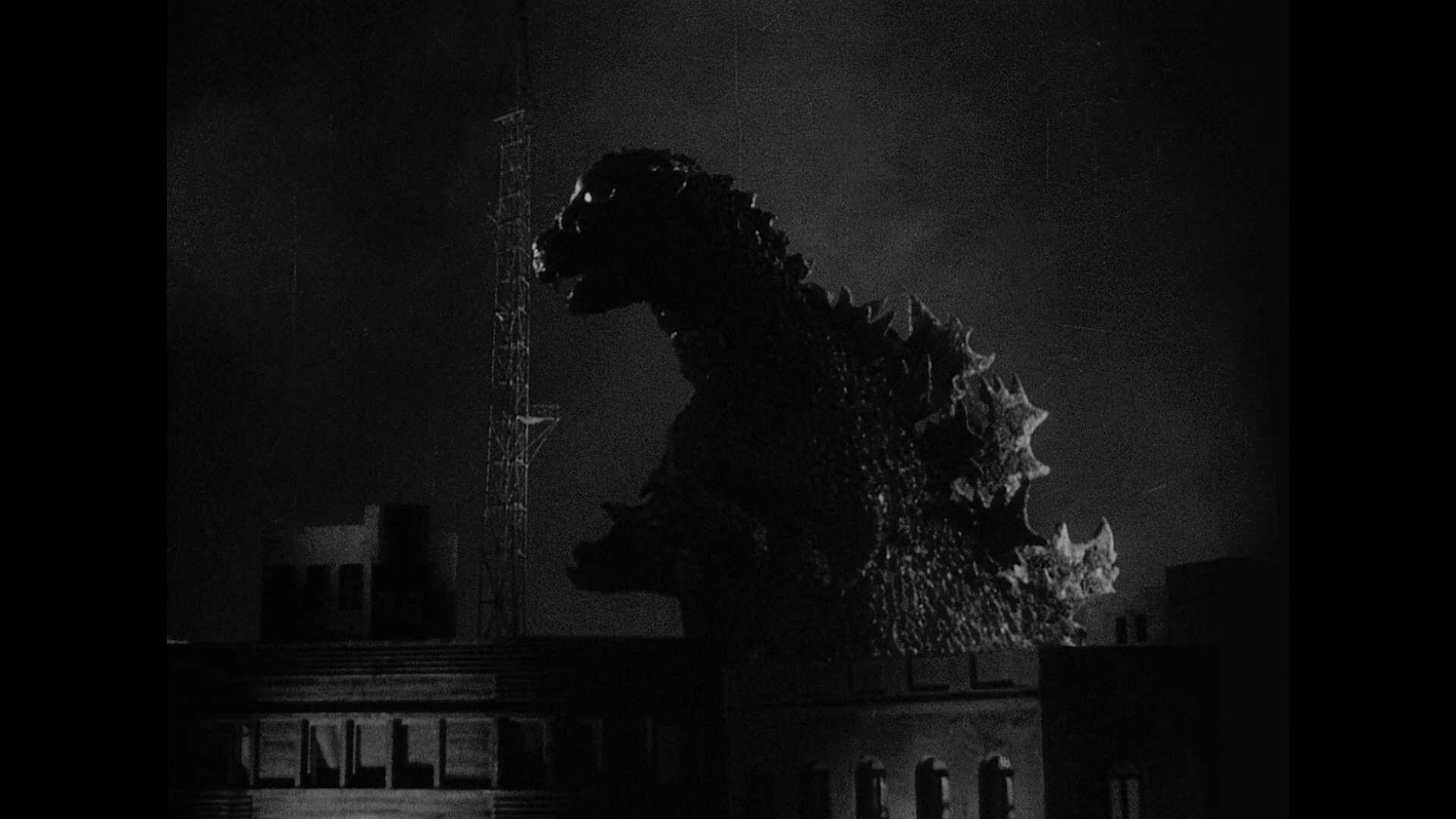 Criterion becomes the first studio to treat this Japanese classic with the utmost care it needs. After decades of sloppy bootlegs – and even legit releases sourced from Toho’s own materials- Criterion brings a new sense of prestige, class, and flair to a film that has been patiently waiting for its chance to showcase itself. Gojira’s camera negative is no longer in existence, leaving this rare find, a 35mm fine-grained master, for Criterion to work from. The results are in the details… lots of them.

Gojira carries a new level of textural definition, which begins from the opening frames. Soft waves scatter from the wake left by a boat, and the sharpness, clarity, and definition are ludicrous in comparison to any prior home video release. Odo Island villagers seat themselves between tightly rendered foliage, clothing of the day is reproduced down to the finest of stitching, and close-ups are intricate. Akihiko Hirata has a small appliance applied near his eye patch for the role, a piece that was faintly visible before now a rightful character trait.

Special effect sequences can now be accessed with greater scrutiny. Matte lines and paintings can be appreciated for their seamless integration. The suit’s scaly hide is impossible to miss, and the miniature work holds under a new level of technological precision. Mistakes are more gleaming than before too, such as the wire suspending Godzilla’s tail as it passes by a downed building, or the fabric under the arms or on the connecting point of the tail. The latter two never stood out before, if they were visible at all.

The battle with Gojira has always been the print damage, a constant assault of lines, scratches, judder, and lost frames. Criterion’s efforts have eliminated many of the concerns and complaints, presenting a print that is stable plus relatively clean. There’s a drastic difference from say, Classic Media’s rather slip-shod HD effort and this. While nearly every frame will exhibit some level of damage, the impact to the piece as a whole has been beautifully and seamlessly minimized. The patch-up has produced stunning results, leaving only the stock footage as a visual impediment. No artifacts from the process make their presence felt either.

A superlative AVC encode keeps a hearty, rich grain structure intact, preserving a filmic appearance without any compression breakdowns. There’s never a sense that this is anything other than film, reduction techniques and clean-up prospering with full respect for the source master. Gray scale is flawless, and black levels present a Godzilla that is even darker against the Japanese skyline. Tremendous depth is established, not just darkness or crush. There’s a fine line between preserving shadow detail and the density of the photography, a fine line the disc crosses without harm.

Gojira opens on a series of footsteps, demanding the viewers attention and building suspense. There has never been a release that has captured those steps with any clarity or fidelity until this one. Gone is the warble and total breakdown of the sound at its peak. It’s mastered here, in a PCM mono restoration, with a grungy reverberation. It’s hard to imagine it was supposed to sound like anything else.

Akira Ifubuke’s score is plentiful in terms of fidelity too, drums during an Odo Island ceremony precise and clean. There’s no distortion. Within the midst of action, including the mayhem during a typhoon with crushing buildings and screaming islanders, the music maintains focus. The elements have never blended with such purity. Screechy highs, especially those when the oxygen destroyer is displayed, are brilliantly refined.

Everything here sounds brighter, cleaner, and richer, the three elemental improvements that will define a restoration like this. Dialogue is never a victim of popping or static, fidelity preserved during the clean-up. Few scenes exhibit any type of audible artifact, likely spots where aggressive restorative techniques would have diluted quality. What’s left is still miles ahead of where Gojira’s audio had been before.

Author David Kalat works overtime on this disc, supplying two commentaries, one for the Japanese version, and one for the US edition, Godzilla: King of the Monsters. Nearly 100 minutes of cast & crew interviews include quips from five people involved with the film: Star Akira Takarada, suit actor Haruo Nakajima, composer Akira Ifukube, and special effect technicians Yohio Irie & Eizo Kaimai.

Photographic Effects is a featurette with some short deleted scene snippets as Koichi Kawakita and Motoyoshi Tomoka dissect the visual effect processes of the day. Japanese film critic Tadao Sato delivers his thoughts on the piece, even recounting the first time he ever viewed it. The Unluckiest Dragon is an essay on Lucky Dragon No. 5, the fishing vessel that was bathed in radioactive fallout, an event that would inspire the creation of Godzilla. Criterion also includes trailers for each feature.