Hollywood made a movie about Rock ’em Sock ’em Robots, and it’s good. Really good. The Mayans were right; we’re all screwed.

Sadly, that also makes the 2012 joke played out on this site, meaning it can’t be applied to movies in which Stone Cold Steve Austin continues to find work. Oh well, it was worth it.

Even with Richard Matheson’s name attached as a creator, and a Twilight Zone episode backing it, Real Steel should be outrageously stupid. At times, it probably is, and the message about people seeking increasing violence because MMA and boxing were old hat is sort of glossed over. You know, the point of the story?

But, much like the sparring bot that becomes the star in the world of professional robotic head smashing, Real Steel finds a way to win. Sure, it’s because it takes an entire script called Rocky, forges ahead into the future, and comes out feeling shot-for-shot sometimes. Real Steel still finds a way to come out unscathed, and the audience should too.

This is a resilient film, and it can’t be called, “little.” The barrage of effects, a seamless blend of CG and animatronic creations, creates illogical emotion. This is where you’re supposed to roll your eyes and provide a deep cynical stare right at the screen. Instead, you’re cheering for a programmed machine. In other words, it all worked, even if it’s thanks to a barrage of corporate sponsorships.

The robot effectiveness can’t be overstated, but neither can the charms of young Dakota Goyo. This kid soaks this role up and spits it out like it’s nothing. Deep down, there’s a wish George Lucas would have held off on the first Star Wars prequel so this kid could have been a young Darth Vader instead of Jake Llyod. There’s that wonder in his eyes, something that can’t be coached. You have it or you don’t, and even in the midst of Hollywood-ized daddy issues, Goyo sells the material.

Real Steel is convincing all around, bolted down in reality by Goyo in the center and surrounded with ideas. Some of them deserve a weightier foothold (why do the robots need trained?) while others enrich the technology and splendor of the fights. With the stories’ original ideals of humanity thirsting for more head-popping violence, maybe wishing for the in-ring war is becoming part of the problem.

That, or there is way too much thought about Rock ’em Sock ’em Robots: The Movie. 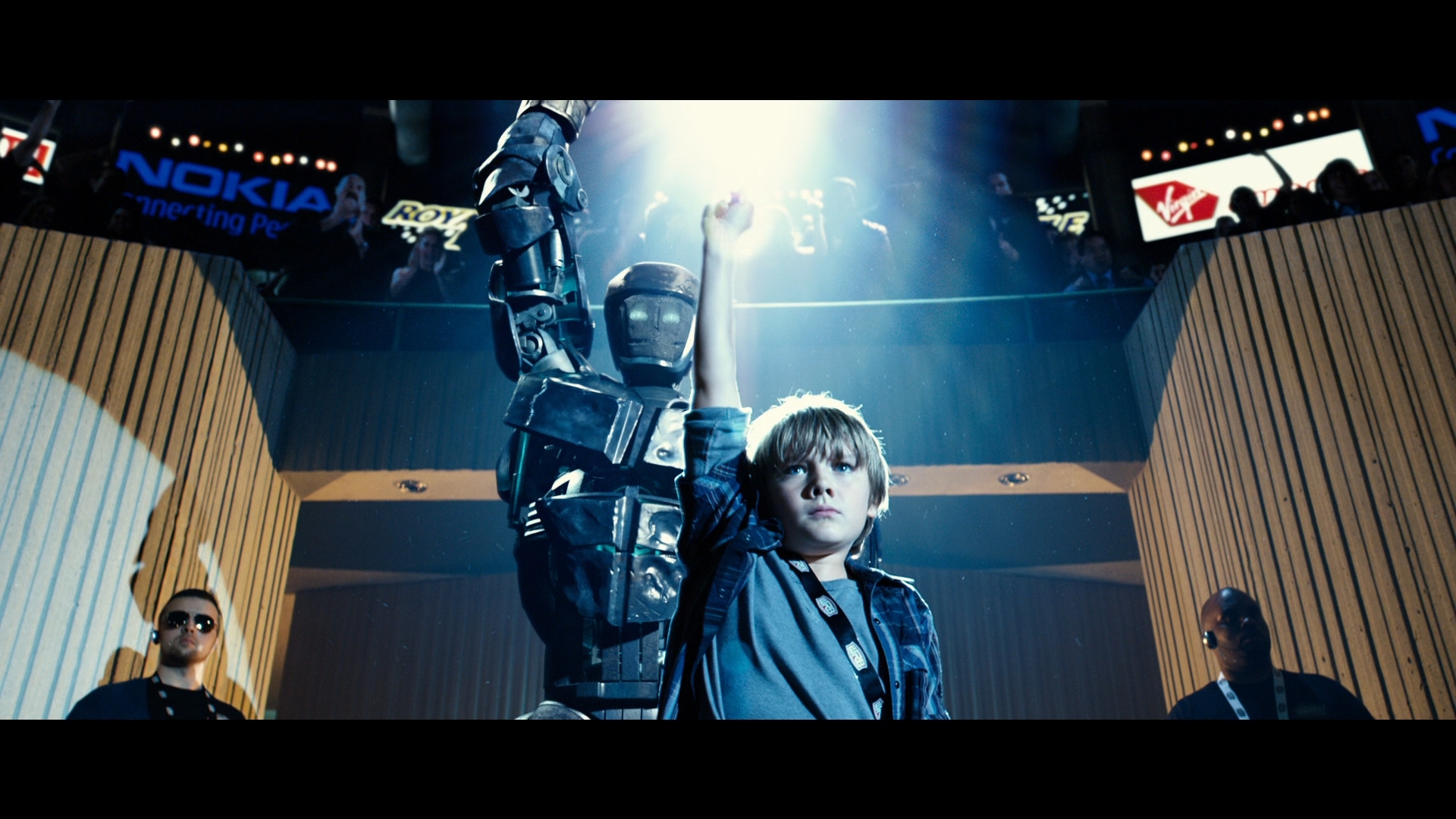 Captured digitally with Sony’s CineAlta, it would seem that the realm of digital has finally come into its own. Every ounce of Real Steel is dripping with exquisite texture, pristine definition, and lush, rich, dominating pop. The film is clearly meant to be a blockbuster, the gloss and depth instantaneously appealing to the eyes.

Color correction pushes saturation without warping accurate flesh tones. It’s refreshing to see something this Hollywood not burn the actors faces with a random shade of sienna. Primaries display a vividness that helps the overall images and these robots spark to life. There’s a rare intensity to the color that is applied across each frame, never diluted or dissipated to match a mood or tone. Real Steel’s palette is generous without fault.

It’s not an easy start either, the first glimpses of Shawn Levy’s movie battered a little by noise within the skyline, noise that will reappear without much in the way of image degradation. This Disney/Dreamworks effort forges on with a thick, healthy AVC encode, managing hefty motion and the digital missteps. Noise here is better handled than some lower level discs display a grain structure. Digging for further faults, Real Steel is also hit with a minimal bout of aliasing, fine lines a bother at a distance, just enough to notice they’re breaking up during camera pans.

All of that feel inconsequential to the weight this transfer carries with it. Textural definition is simply astounding, reproduced here without loss of fidelity. Medium shots, where so many CineAlta-captured (and digital in general) affairs seem to wander a little, are maintained brilliantly. Facial detail is a small miracle in spots, leaving those odd, intentionally smoothed zooms of Olga Fonda stand out harshly. The balance leans wide into the corner of precision and HD spectacle though, making Real Steel a surefire visual demonstration piece.

There will be an avoidance of potential puns with regards this sterling audio presentation, stuff like, “The surrounds Rock ’em, and the bass Socks ’em.” Nope, you won’t find any of that here.

Listeners will be immersed in what this 7.1 can do though, a powerful, treble and bass happy extravaganza that hits with monumental force. Crunching metal is never lost, opportunities presenting additional material for this mix to push out from multiple directions. Crowds are intense, positioned with precision and taking advantage of those additional channels. Here, they matter as more than filler.

Fight presence is brutal, with a generous assault of low-end heft and clean, crisp highs to capture the entirety of potential audio cues. Fidelity? Of course, as if doubt were running under this modern (and certainly expensive) aural force. Punches wind through the stereos, even whooshing through the rears if additional exaggeration is needed, before finding their target in whichever channel lines up with the visuals.

For all of its metallic bumps and bruises (do they bruise? They do bleed after all), sound design can be best served as a subtle thing. A trip into a robot scrapyard proves to be one of those minor highlights, but one that sticks with you. A thunderstorm begins dumping gallons onto the set, thunders reverbs into the subwoofer, and water seems to splash against everything. The effect is whole, natural, and brilliantly handled, which could be said for everything here if it’s time to generalize.

Director Shawn Levy will take viewers through a Blu-ray second screen experience, offering information either on your PC or iOS device as the movie plays. Personally, actual in-movie experiences are wildly more effective. Countdown to the Fight is an in-character promo for the film’s main event, staged as realistic as can be expected. Making of Metal Valley details the surprisingly complex and multifaceted approach to creating the scrapyard scene, and it’s a worthy 14-minutes.

Building the Bots goes over the decision to use both real animatronic robots and computer generated creations, along with the design process. Cornerman’s Champ focuses on boxer training with Sugar Ray Leonard. Two deleted scenes are lengthy (almost 18-minutes) with an introduction from Levy. A brief blooper reel is worth a watch too.