The world as viewed by a child is an amazing thing, seeing the global landscape light up because a candy maker has kicked off a contest wherein people could visit his factory. News reports are global, kidnappers hold people ransom for chocolate, school is dismissed for chocolate emergencies, forgers are abound, and auctions sprout up pawning off potential winning bars.

Willy Wonka is right up there with Wizard of Oz for one of those childhood rights of passage. It’s an experience of terror during a ride down the chocolate river, stern, focused messages, and brilliant splashes of saturated color. Candy seems to sprout from the ground, and diabetes is probably years away… for some of these kids at least.

Every ounce of sparkling creativity creates a film you just have to go with, unthinking about the quirks and the questions. To do so is be an adult, and clearly that’s missing the point. Wonka is about soaking up the weird, eccentric pleasantries of this madcap candy man and his quiet sincerity. Gene Wilder is this movie, and he’s only needs to be in half of it.

He’s backed by glorious production and art design, teeming with freshness and ideas that even the best computer generated imagery of today cannot match up to. There’s a spark that began with Roald Dahl’s book, brought over into a place that feels almost infinite in childhood wants. Seeing the candy room for the first time isn’t unlike when Dorothy first sees the colorful land of Oz. It’s partially because the shot feels set up almost exactly the same, and also because the wonder of the visuals and majesty of the score strike a chord.

Wonka is a pure product of the ’70s, ushering in a trippy, zany era of anything goes visuals, and plot oddities that make an adult cringe. At some point in life, the messages are learned and it comes down to a madman enslaving an entire race of orange people, striking up a marketing frenzy worldwide, and surely turning it into billions in profits. Ingenious.

Maybe that is the adult side of it, or at least anyone with a shred of marketing work behind them. It’s part of getting old though too, turning cynical, and being unable to look past the fantastical to see the film for something more. Sure, it’s fun to take a stab at Wonka’s sensibilities or business model, but if you can’t escape for 90-minutes of your life to soak this in without over analyzing, you’re nothing more than a bad egg. 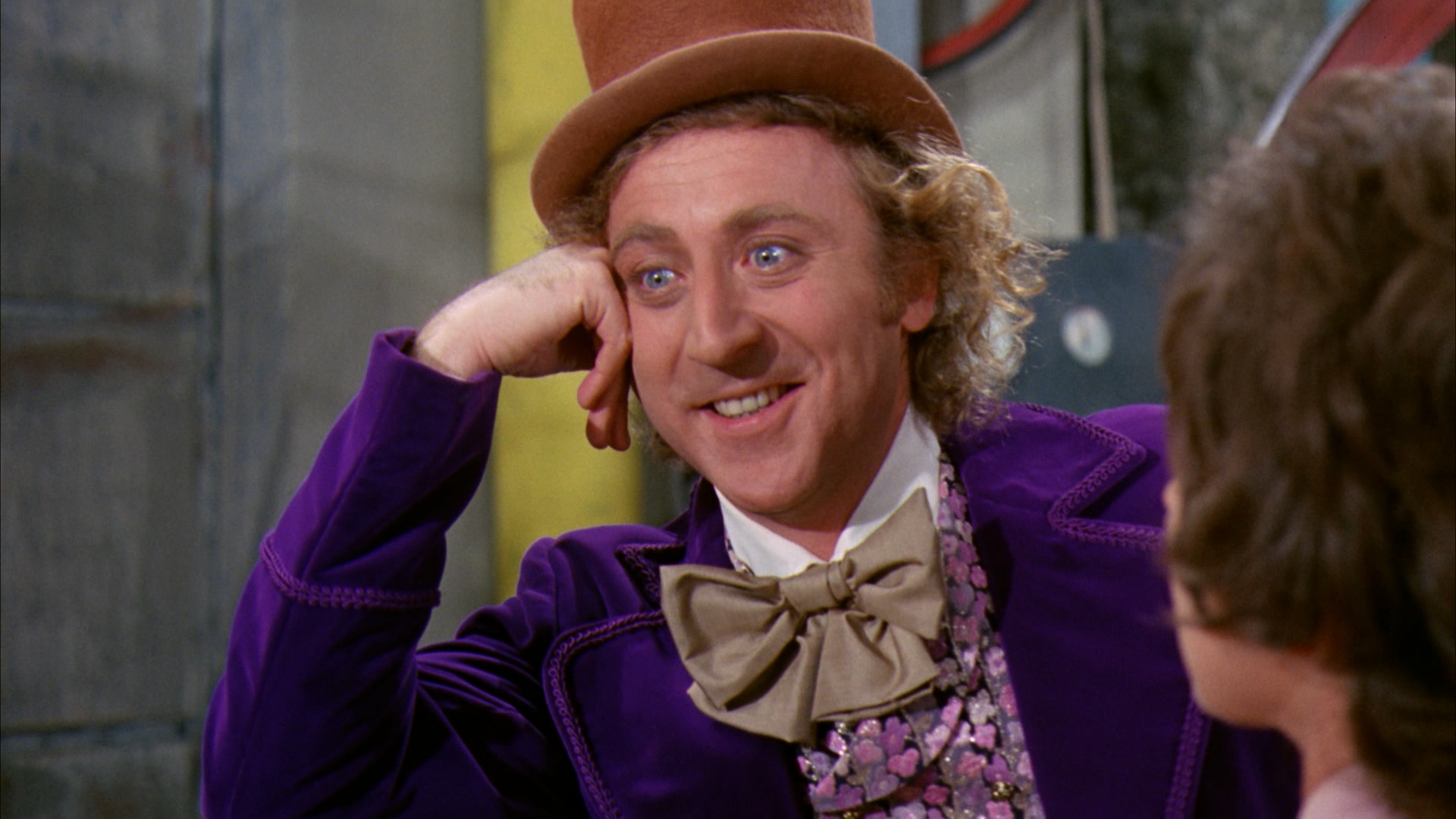 Warner’s 40th Anniversary box set release for Wonka is a re-issue of their 2009 VC-1 encode, just crammed into fancier packaging. As cautious as Warner is with their precious catalog affairs, Wonka’s master and encode still hold up under increasing scrutiny and rising expectations. The print used is immaculate, which even goes for the extensive visual effects and multi-pass shots. There’s neither a stray scrap of dirt or scratch left.

All of that clean-up has left no digital residue behind. Nothing here seems unnatural or lost, the codec recreating a slim grain structure that preserves the texture of the close-ups and the majesty of those sets. While maybe not quite as revelatory as the Oz initial reveal despite the photographic similarities, those gummi bears and bouncy jaw breakers are just as sterling.

If the presentation dives south for any reason it’s the oversaturation of primaries, especially reds. Charlie’s scarf and jacket are blazing off the frame, clearly a bit of a holdover back to when DVD was trying to impress by injecting artificial life into these classics. Wonka’s meant to be intensely colorful, but clearly, the reds have a mind of their own. The fizzy cola room is also a little haphazard, that upward flow of bubbles causing some mild compression concerns, and the clarity dip from the effects doesn’t help either. It’s doubtful that sequence will ever be captured with much precision.

Aside from those mild, if still significant dips, Wonka is a treasure in HD. Black levels merge perfectly with the rest of the presentation, giving the piece another layer of appreciable depth. Contrast is held naturally firm without any attempt to spruce it up, and sharpness is manageable for a film this vintage. Finally, note that Wonka was shot open matte, and this Blu-ray is presented at the film’s theatrical ratio, 1.85:1. The full frame version expands vertically a tad (also bringing with it a visible technical flub or two) and is not available in this set.

It comes time for Wonka’s TrueHD mix to shine as soon as “Candy Man” begins to sprout and take shape. That’s when it counts, and this smooth, fidelity-rich track comes loaded with natural age. Lyrics flow beautifully from the center while the stereos (and to a lesser extent, the surrounds) push the bright instrumentals.

The sound space doesn’t let Wonka breathe anymore than it ever did, and the ride down the chocolate river isn’t anymore delirious than it once was. Added channels aren’t a defect mind you, just a bit of dead weight for a film that is never going to use them. Uncompressed mono or a small split into the stereos probably would have brought additional authenticity to the source.

There’s nothing wrong with spreading out the audio per se; it’s all purist fascination honestly. This is a marvelous update regardless, which much like the video is free of defects. Each song, including the slow roasting “Pure Imagination” are captured without any technical quirks. Straight dialogue is energetic and the sound effects within the factory walls shine.

You’ll spread yourself thin tracking all of the extras in this set, coming in a tri-fold case with three discs. The Blu-ray holds a commentary track with the kids, or adults now actually. Pure Imagination is a wonderful retrospective and making-of in one, a half hour of insight and ancedotes. A featurette from 1972 is forever preserved here with plentiful on-set footage, including an Oompa Loompa manning a camera… so yes, a Loompa might have directed some of the movie. Conspiracy nuts unite!

For the kids, there’s a four-part sing-a-long, as if there needs to be any type of help in remembering these tunes. After that, you’ll need to insert the DVD edition of the film, because that hold a photo gallery and cast & crew biographies. Eject that, and next in line is a special features DVD with two whole featurettes totaling 25-minutes. Why aren’t these elsewhere again? And why did they need their own disc?

Be warned that despite the annoyance, Mel Stuart’s Wonka Vision is certainly worth a watch, as the kids come back to rant at Mel, tell stories, and offer memories of the on-set antics. A secondary vintage featurette, A World of Pure Imagination focuses on the art design.