Puncture has a point to make being one of those movies building up the little guy while harping on the mega conglomerate. There’s such a layer of idiocy within the corporate politics involved in the invention of the safety needle, it almost comes across as a scathing satire posted by The Onion.

Direction by the Kassen brothers turns this, at times, into a near cartoon. Hotshot lawyers with their acreage meet with CEOs in darkened rooms at night, carrying on tense conversations that would be out of place in Inspector Gadget. You half expect Dr. Claw to pop in and add his two cents.

It’s not enough to totally wash the heart and soul of this story away, Chris Evans starring as a drug addicted lawyer willing to take on the HIV-spreading needle company even if it ruins his tiny personal injury firm. There’s plenty of fight that goes beyond money; it’s strained friendships, relationships, and a rocky personal life for the sake of millions in saved lives.

Evans plays the role with a certified smugness, a cocky renegade who isn’t afraid of being put in uncomfortable scenarios and is willing to rise above the standard of ambulance chaser. There’s a fantastic character here, functional despite his addiction, not unlike TV’s Gregory House.

Dialogue exchanges are kept fierce, a sense of urgency and tension delivered from narrative-enriching performances. Lawyer showdowns go beyond paper trails; victims and disgruntled employees are inserted into integral roles. Information is used as a weapon, and each new opening brings a smile to Evans’ face, a sense of accomplishment shared by the audience. After all, who didn’t want to see Dr. Claw fail? 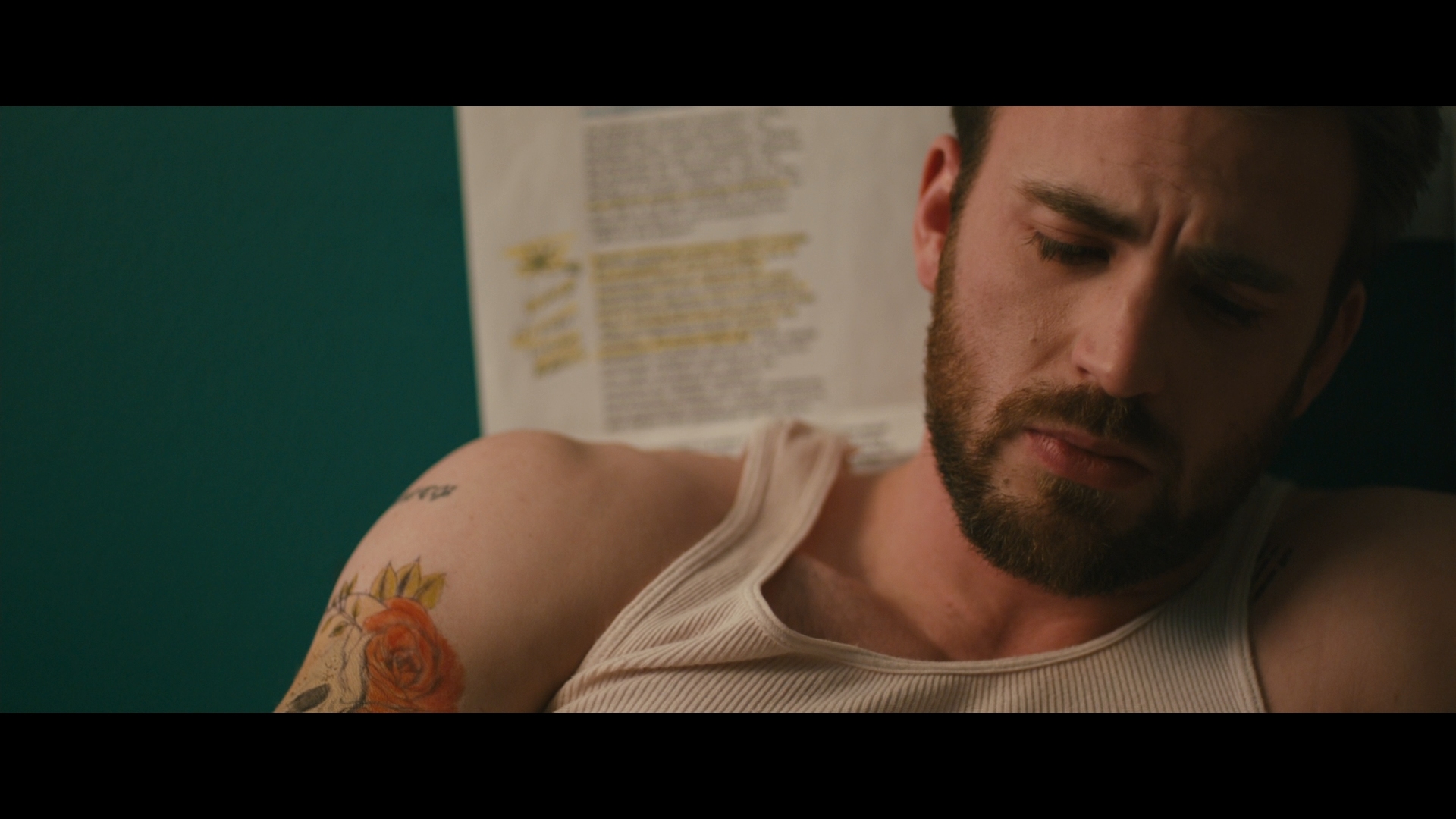 Digital is the source medium, at times upping the frame rate to not only break from the film-like look, but smooth out the motion for a direct-to-cable vibe that is completely unnecessary. Puncture is mostly bland, fending off feeble black levels and generally miniscule contrast impact to settle into an average range it will never escape from.

There’s some clear intent, including a hideously turquoise color timed arbitration room with a blitzing contrast that slams the walls with a heated white. Most of the time, this one desaturates itself for a moody appearance that is meant to ramp up the drama and downplay the brighter moments of victory. Puncture is consistently mild in its visual approach.

Nothing has any concern as far as standing out including overall definition. By default, the clumsy, soft facade never aims for anything better. Soft exteriors lack that razor sharp precision, and most close-ups seem to wander without ever finding crispness. When fine detail does reach a peak, it’s a cause for celebration. Puncture has some life after all.

The AVC encode from Millennium is sufficient, rarely faced with any difficult scenarios to resolve. Digital material here is free of general noise and fast action isn’t something the film toys with. The encode keeps the image clean without any artifacts.

There’s a sort of natural air to Puncture’s dialogue, appreciated in environments like a factory, not so much in board rooms or offices. It comes across as if it is lacking fidelity and precision, not unlike the video. It’s almost muffled to a point, expectations these days raising the bar for cleaner chatter even from something like this.

Sound design is otherwise spot on, at least in those few moments when it’s called upon for anything active. Ambiance inside the industrial area of a processing plant is energetic, and a heavy downpour makes some noise on the interior of a car and the exterior a few seconds later. Where needed, a precise echo is added to enrich the dialogue, if not the fidelity.

Puncture’s Blu-ray has the following header: Special Features. Under that? Bonus Material. Um, aren’t those the same? And better yet, there’s nothing on the disc. The “bonus material” are trailers, which the case art lists separately. Go figure.