Gavin O’Connor knows how this works. After all, he directed 2004’s sports opus Miracle. With success and praise, O’Connor switches sports to MMA, and brings with it all of the formula.

Warrior is a hard movie to hate though. It’s brawling up and down for three rounds to come together, working the entire time. Between conflict, it just sits down in the corner and takes a breather, and that’s where O’Connor (along with Anthony Tambakis and Cliff Dorfman on the scripting side) can’t help themselves.

Where would the sports movie be without the wounded wife, totally unsupportive about her burly husband taking on combat sports instead of a teaching gig? How could it survive without the training montages? Family drama? Trainer angst?

At times, Warrior deserves to have its neck rung so tight its head pops off its shoulders. There’s just no excuse for what this movie is doing… and then it strikes back. It’s no secret where Warrior will finish, because, well, it’s a sports movie. Intertwined into that mix is something special though, a real hard-edged, emotional pull relevant to the day and the sport. The best sports movies, after all, are never about the game, but the people in them. That’s the saving grace here, plus a substantial effort from Nick Nolte who pushes forward with his best work in a decade (or more).

Tom Hardy and Joel Edgerton star as opposing brothers, each taking their own life path that veers away from their alcoholic father (Nolte). Fighting becomes a sort of dirty “in” for the family, a way of piecing things back together after the boys found individual means of escape in their teens. That shaky foundation means there’s something immediately special about Warrior in less than 10-minutes. It forces the audience to feel something as characters spill their histories.

Feel something you will too, Warrior’s grueling cage fighting refreshingly authentic with few penchants for theatrics. The big screen is kind to this growing sport, certainly more so than the exploitative debacles on home video like Death Warrior. There’s an honesty here, not a sell on huge roundhouses or swinging hooks. That said, a gruesome finale bends every rule just for the sake of an emotional tug, and certainly doesn’t speak for common sense or officiating professionalism.

Warrior is that close to being 2011’s stand out, a draining, aggressive drama that rarely goes for the manipulative. Rest assured there’s always Jennifer Morrison crying on the sidelines for that Adrian-inspired desperate cut-away, because clearly, what is happening between brothers inside the cage isn’t enough. It never is for these movies. 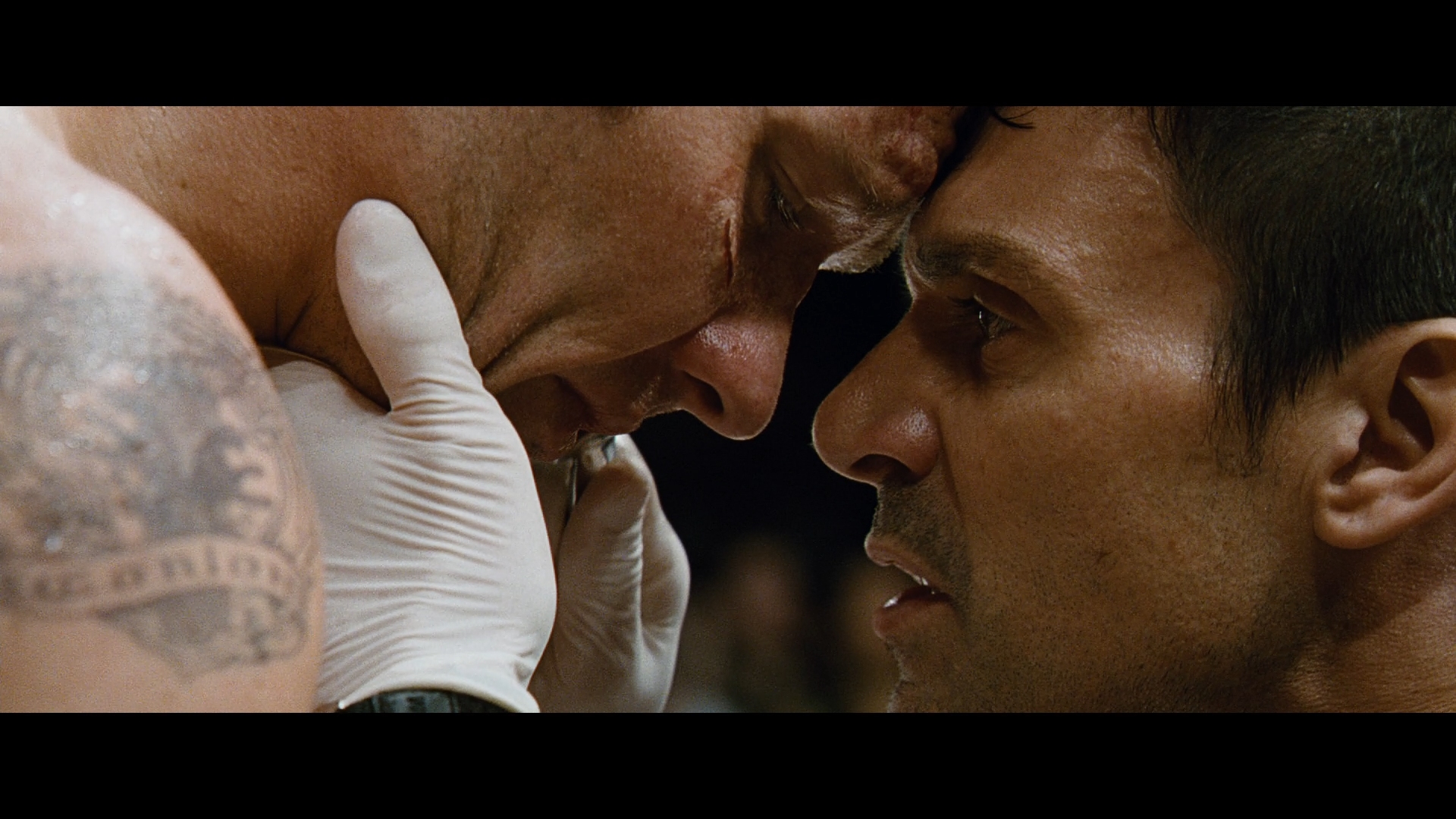 The visual styles of Warrior never cease in their implementation. Polarizing views of the brother’s separate lives are picket-fenced Americana with candied saturation and dim, depressed gray flatness on the other end. In-between, it’s all natural, the fight scenes meant to fit within a narrative and still maintain their pay-per-view gloss.

Lionsgate has an encode battle on their hands, the film’s grain structure battling with the digitization that tries to keep pace. Of course, it doesn’t or it wouldn’t be much a discussion. Grain ceases to be grain with regularity, the intended look just overwhelming to an encode that couldn’t reach much higher with its bitrate. As some high school kids cheer on their physics teacher, their shirts swarm with chroma noise and the background is lined with banding. There’s even a dead pixel during one celebration edit.

Black levels will march up and down too, never comfortable here. At their peak, it’s all perfection, a nighttime confrontation between Edgerton and Nolte showing the disc’s best work in the dark. Whether for visual reasons or transfer qualms, certain shots that need those blacks just wander. Quick to recover or not, those glaring holes in Warrior’s tough exterior do begin to add up.

Other mild artifacts, shimmering on fine lines immediately apparent on Tom Hardy’s jacket during the opening scene for example, are less of an annoyance. The ability to render a stadium’s worth of adoring fans without so much as a flicker deserves some credit. When it’s there, high-fidelity detail has a firm presence too, close-ups resolved well and the sharpness the format offers brings this one to life. Warrior is certainly photogenic and loaded with great cinematography, if you can look past some of the compression.

Purists will appreciate the inclusion of Warrior’s theatrical 5.1 mix, while the less concerned with their neighbor’s quiet comfort will dive into a 7.1 home theater affair, the one reviewed here. This is a lively, generously spaced audio showcase that doesn’t miss an element. Gym environments are filled with punching bags and in-ring work, splitting the stereos as well as filling the surrounds. Stadiums capture the sense of being there live with fans cheering or jeering fighters, coaches keeping a crisp presence in the center.

One of those, “going the extra mile” audio moments is a montage at 54:30. TV reports, training sessions, and small conversations are presented in windowed frames that move about, the sound tracking each motion. It’s totally unnecessary yet completely involving.

Warrior likes to shock the listener with some brutal jolts, from a fireworks display before the event that hammers the subwoofer to a brief visit to a military base that rumbles from overhead helicopters. The fights themselves are surprisingly restrained, punches hitting with only a little force as to not exaggerate the action. There’s a discernible rumble when blows connect, just nothing on the forceful level of a Rocky. It’s better balanced and contained because of it. Restraint is appreciated sometimes.

Despite being a bit of a box office clunker, extra features are not skimpy. The involvement from cast and crew is above the unfortunately dismal standards of so many straightforward bonuses. Full Contact is a feature length picture-in-picture commentary with Nick Nolte and director Gavin O’Connor discussing the piece. Chatter continues over a Joel Edgerton and crew non-visual commentary.

Redemption: Bringing Warrior to Life is a 32-minute making-of, insightful and honest as it details the process plus studio blessings. A single deleted scene is offered with or without commentary, followed by a funny little gag reel called Cheap Shots. Brother vs. Brother breaks down the final championship fight in split screen.

Philosophy in Combat chats with trainer Greg Jackson on his involvement in the film, which was worth enough to alter the script. Simply Believe is a retrospective on TapOut co-founder Charles “Mask” Lewis Jr., with plenty of tears shed during this 14-minute dedication. Trailers for a stock of Lionsgate action flicks remain.