Forgive this unorthodox intrusion into your regular review reading, but there’s a point to be made. Heading to IMDB’s Dolphin Tale page on its DVD/Blu-ray release date brings up an ad for Universal’s Big Miracle. That one is about a group of people helping out some stranded whales in the Antarctic.

See, it’s sort of shameless the way the studios do this. Every year there’s one, maybe two inspirational stories of people banding together for a common cause, the heartwarming stuff that hits you, well, “right there.” This though? This is a Universal exec sitting in a chair seeing box office results thinking to himself, “Holy crap man! Mammal fish are in this year! Crank something out!”

And that sort of sums up Dolphin Tale.

No, it’s not like they’re shamelessly riding on the high of a box office smash, at least not a singular one. More like all of them. And then, to top it off, they put the whole thing in 3D. There are producers in the extra features rattling about what 3D means for the art, and the sheer lack of dishonesty is appalling. It’s not for

the art; it’s for more expensive tickets to a manipulative kid’s movie destined to manipulate kids into seeing it.

As is par for the course, there’s nothing wrong with the story itself: a stranded dolphin you’re sure to fall for, some kids banding together to save it, and quirky doctors making it a prosthetic tale.

Dolphin Tale doesn’t even try to avoid those common cliches or even pull too many tears. For every downer there’s an equal force on the opposite side pulling it back into happy land. God forbid if the material is too powerful. That would be horrific and word of mouth wouldn’t sell more 3D tickets.

Credibility is not something this movie has, not just because of its devious business plan or total lack of entertainment value either. There’s a scene where the two lead kids play with a remote controlled helicopter, the CG model running around causing mayhem in the most implausible way, and for what? A laugh? Character development? Oh wait, to justify some radical 3D effects this movie needed because otherwise it’s a pointless marketing tool.

Dolphin Tale is soulless, the result of exit surveys brought together over the years to figure out exactly what works because the art is so far removed from this picture, no one bothered to do anything other than the norm. Montages? Check. Fade edits perfect for that TV premiere? Already included. Sappy score? Absolutely. Soft-spoken Morgan Freeman? You bet. Annoyingly written kids who are supposed to be adorable? It’s overflowing with them. Someone bury this thing already. 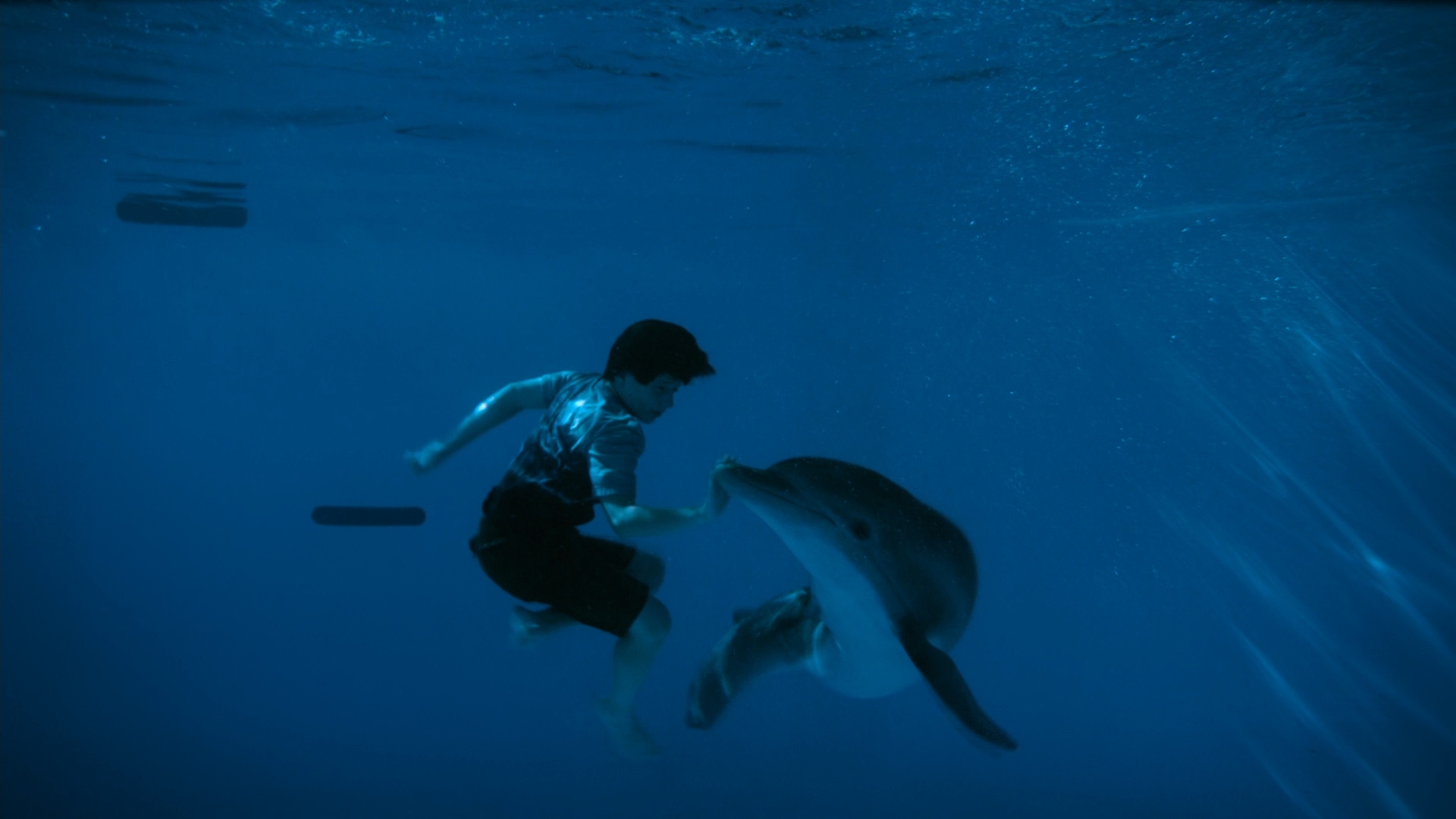 Let’s look further though. Being captured in 3D usually means digital, and such is the case with Dolphin Tale. But, look at what the digital intermediate has done. It’s taken these images, warmed them up, contrasted them, and saturated it. The movie looks appealing because it looks like it’s shaded in candy. What kid doesn’t want candy?

In the scheme of things, it’s a pristine HD image. That is, after all, what you’re probably here for anyway unless you happened upon this through Google for something else. Clarity is wonderful, it’s noise free, and it’s mostly consistent. There are no faults within the palette, and the contrast is weighty enough to constantly make the movie look like it’s sparkling.

Black levels do falter on occasion, slumming it during a number of interiors at night where they just wander off and do their own thing. It leaves the image murky and unrefined. Maybe it wouldn’t be such a bother if the blacks weren’t so perfect in every other way, pouring on the depth and the dimensionality just in case the technology fails otherwise. It’s nice to have a back-up.

Still, things are a little stale in the department of fine detail, Dolphin Tale never reeling in (you can boo that one) the heavy stuff. It’s a ways into the piece before that first bit of facial detail even comes into focus. Things perk up as time moves on, sliding into a slightly more consistent stream of constant texture, clothing and such especially well refined. The pieces come together cleanly, if purposefully.

Dolphin Tale pushes a few dazzling moments of audio into the mix, at times just enough to realize more exists than just dialogue. As Sawyer (Nathan Gamble) dabbles with his computer and makes dolphin sounds sprint from those meager laptop speakers, they begin to travel. Squeaks and such begin spiraling around the soundfield, hitting each channel in a pleasant little showcase.

Of course, there’s that abominable RC helicopter sequence which for all of its idiotic showiness does manage to impress sonically. It zips and dives through the speakers with effective imaging, probably the only reason to ever watch that scene twice.

The aural highlight here is a hurricane ramming the Florida coast, heavy winds picking up, thunder roaring overhead, and debris being tossed about like it’s nothing. The mix is finally allowed to kick into high gear, bringing forward all of those qualities a home theater owner is looking for, and it’s there for a story purpose. Shocking.

Extras are a mish-mash of basics and stuff for the kids, the latter entertained by an animated tale The Hutash and the Rainbow Bridge, an expansion of some dialogue in the main feature. Then there’s an animated cartoon that has nothing to do with anything (but it is actually funny), Ormie and the Cookie Jar.

Digging into the movie, At Home with Winter stands as the basic making-of, Winter’s Inspiration detailing the true story. Spotlight on a Scene runs through the technicalities of animating CG dolphins for the opening. A sole deleted scene is followed by a gag reel, and then mercifully, it’s all over.