Let’s face it: The only reason Fright Night was remade is because it has vampires, and it can make the Twilight joke. That’s not saying the original was a terrible movie or wasn’t good enough to be remade. But really, can anyone say this would have happened if it weren’t for sparkles and wolfy?

This one is a clear money maker, fed into the 3D tech with objects barreling into the screen, blood splattering into the camera, and plentiful other showy effects that have nothing to do with establishing pace. It also looks cheap, a shot on video appearance jacking up the frame rate to turn this into something closer to a SyFy Channel original. Cinematic appeal be damned.

Fright Night isn’t a total loss, Colin Farrell pursuing a creepy vampire role with an assured cockiness that works on a couple of levels. There’s a meticulously crafted master shot from the interior of a car in the midst of a crucial action span, easily the filmmaking highlight, and adding a sense of energy after a stretch of tension. Charley (Anton Yelchin) is trapped in the interior of his neighbor vamp’s house during a daring rescue, the camera play keeping Farrell in view as the hiding games continue.

The film has fun with itself, the writing self-aware and pushing past the vanilla, “Vampires exist?” conversations to plant itself into the thick of it. That’s weirdly jarring though, the conditioning such that the build-up is requested for pacing purposes. Fright Night doesn’t leave audiences wondering or checking Charley’s sanity. Farrell is a vampire, he’s killing everyone in town, and the geek must win.

Dreamwork’s/Touchstone’s remake fights and claws to a fun finale, this after an equally brutal lonely road assault, winding around a drunken magician, girlfriends, contortionists, and vampire-fighting ingenuity. There are surprises here in the closing moments, even if a character-saving device feels tacked on to avoid any emotional toll. The people must be sent home happy, because risk taking doesn’t always equal expensive 3D ticket sales in the future. 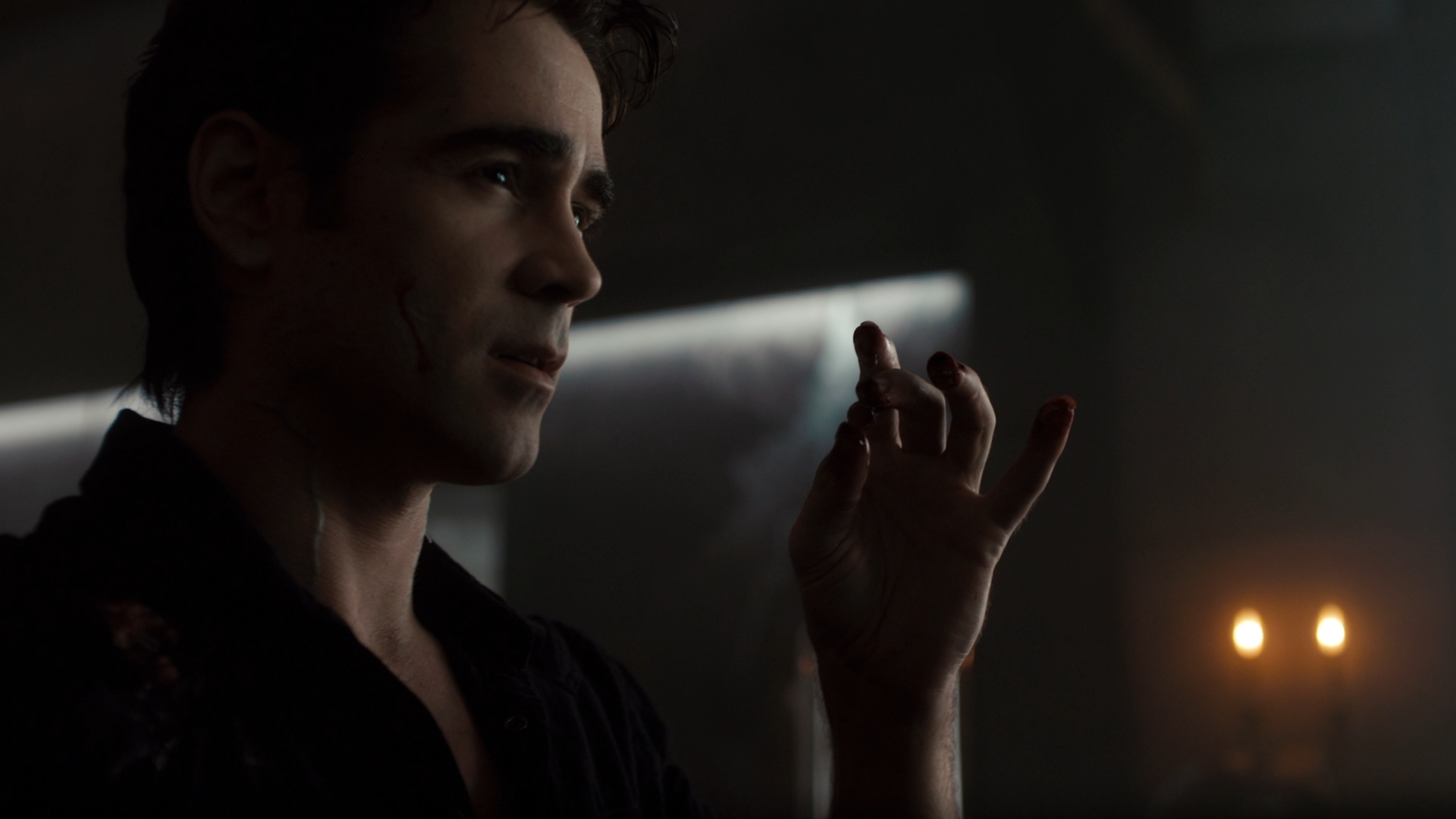 Shot with a combination of digital cameras, Fight Night is bogged down under a variety of decisions and source annoyances, not the least of which is a miserable plasticine appearance that swallows medium shots. People don’t give off a glossy veneer like these cameras think they do, robbing the movie of a texture or natural grace.

Close-ups are sparing, picking up in the back half and some facial detail sinks its teeth in (it’s too hard not to gun for puns, or rhymes for that matter) to finally deliver some crispness to this miserably soft production. It probably doesn’t help that the early dusk/nighttime scenes are an impossible shade of blue/teal, the moon apparently gaining a filter as it rests directly outside the windows. It’s made worse since it’s contrasting with a pleasing layer of saturation during daytime exteriors,

Black levels carry two qualities, the first being a murkiness and the second being distinctive crush brought on by the special effects. That master shot mentioned above? There’s no shadow detail to be had, just patches of black mixed in with blue. It’s technically impressive, not visually.

Noise is kept to it minimum, scattered on the walls as Charley investigates his new neighbor’s house, before receding into nothingness for the rest of the run time. Other caveats common of digital, including aliasing, are free from this effort. The AVC encode is pure as well, keeping itself out of the battle so the blame can surely lie on the source material.

As for 3D, sure it can be showy with its gore. Everything else is abysmal. The level of visible cross talk is disheartening, damaging the level of depth. Also, Fright Night is shot dark, turning the already crush-heavy night scenes into blotchy messes. Most of the film is hampered by the attempted 3D, not helped. Dimming glasses only further complicate the depth intent, robbing the piece of what little fun it could have. Skip around the chapters if you want to experience the high points, but chances are you’ll spend less than five minutes with this disc before calling it.

Rarely does live action do this much traveling through the sound field. This is the type of design typically reserved for animated fare. Once again it’s that master shot, where the panning camera within the interior of a car allows the audio to keep pace with the motion. Voices moves from one side to the other and then directly into the surrounds for a sterling example of how well motion can be conveyed within a home theater. Dialogue is never a stranger to directionality, freely swirling around as the visual space insists.

Oh, and bass is stern. Guns during the finale burst free from the highs and sink deep into the lows, and a handful of explosions ignite not just fire, but the subwoofer. There’s no loss of low-end fidelity or uses, Fright Night kicking off from the credits where a storm roars as the camera passes through. This is a better mix than expected for the material, and better than it has any right to be.

Peter Vincent: Come Swim in My Head has David Tennant in-character as he chats about his magic show for two-minutes to start off a typical slate of extras. The Official How to Make a Funny Vampire Movie Guide is the only making-of material here, a dreadfully canned promo that runs eight-minutes. Five deleted and extended scenes last for nearly five minutes, followed by a marginally amusing blooper reel. A “home video” of sorts that fits into the main feature is included in its entirety, with a music video and trailers sagging behind in last.