If you’re going to appear up on pop culture, at least do your research. Michael Pena, hysterically funny as he can be in 30 Minutes or Less, butchers the infamous “Konami Code” when referencing the classic Nintendo Contra. Jesse Eisenberg’s character even gives him a pass.

Maybe that’s the joke, but it’s too easy to imagine a group of people who don’t know any better trying to earn extra lives by inputting whatever garbage Pena was spewing out. That, or it’s a sudden realization that a generation of the game playing public don’t see a need for the Konami code any more and you realize you’re old.

Moving back onto the tracks, 30 Minutes or Less‘ brand of sexually deviant dialogue, racial slings, and all around coarseness becomes its charm, yet not its greatest quality. When it’s not failing to tell people how to cheat at video games (sorry), 30 Minutes delivers a goofy fish out of water tale.

That’s what it does best, Eisenberg teaming with Aziz Ansari as pizza driver and substitute school teacher respectively, suddenly thrust into a situation where they need to rob a bank. The other duo, Danny McBride and Nick Swardson, have strapped a bomb to Eisenberg, forcing him to snag $100k from a local bank so the rival duo can open up a tanning salon… with “benefits.” There’s also a need to hire a hitman to kill McBride’s militaristic father, a movie thieving role by Fred Ward.

When that plan is in action, from the bank robbery to McBride/Swardson following, 30 Minutes peaks itself out, running on a full tank before draining it down to fumes for the finale. It’s as if the plot and relentless product placement sours the dialogue. It’s a movie struggling to break 80-minutes and still takes the time to tip the hat to its corporate partners.

With this cast, it’s best to let them do their thing, the Blu-ray holding a treasure trove of outtakes and alternate cuts where the script takes a backseat. It’s ad lib at its best with a crew capable of endless takes, each with something new. It’s just not the same when discussing the bomb, money, or Contra codes. 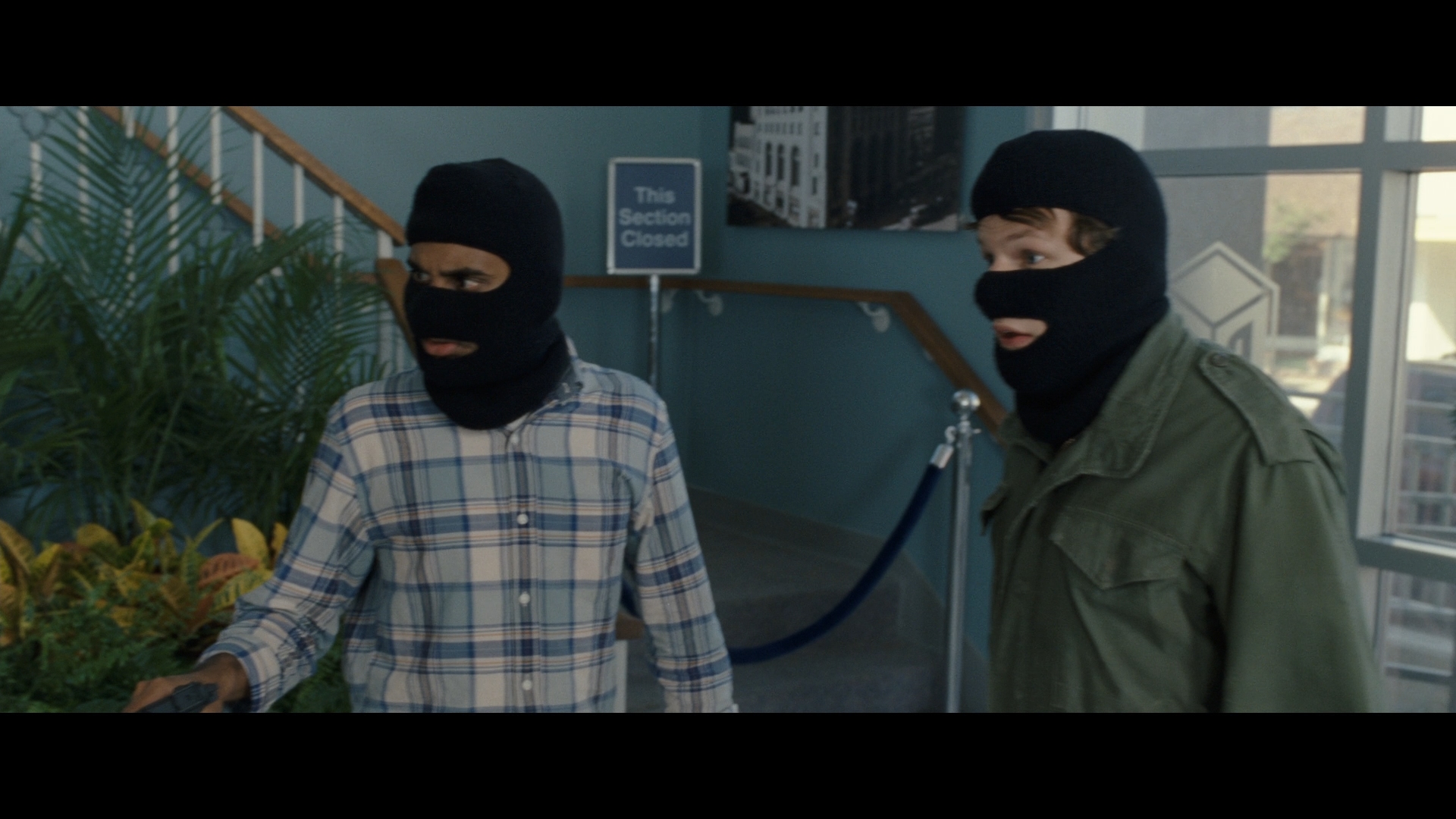 There’s not much energy to 30 Minutes’ look, even if it never veers off course into a realm it can’t recover from. The film-based source never strikes with any ferocity in terms of its definition, producing decidedly weak images without much punch. At the heart of it all is a distinct lack of high-fidelity detail, the disc searching for a happy medium before settling down into mediocrity. Close-ups look flat, textural precision isn’t a focus, and there’s little zest to the dimensionality.

Sony’s AVC encode wraps up a grain structure enough to barely make it noticeable, a high bitrate effective at remaining out of view. The whole thing appears on the soft side, naturally soft mind you, but still lacking any oomph. The color palette has some spice, primaries pushing for some life, leaving flesh tones untouched and focused on remaining natural.

Black levels never do anything wrong or take off into shady grays, remaining firm on their material’s hold. Still, they lack a spark to dig in and take over, which at this point makes this whole thing sound terribly repetitive.

The thing is it’s hard to spot anything particularly wrong, this modern comedy bucking a trend of hellish flesh tones and intense color for something a little more routine. Transferring this one to Blu-ray has introduced no visible side effects, artifacts, or other unwanted elements. It’s clean, crisp, and totally unremarkable, but nothing indicates that it shouldn’t be.

There’s plenty of hearty action in this comedic venture, more than trailers probably suggested. If the booming, soundtrack-heavy opening titles don’t force you into paying attention, the explosive antics of McBride and a watermelon at 5:36 will. It’s a transition from mild mannered dialogue to, “OH GOD, my eardrums!” in less than two seconds.

Maybe that insinuates a lack of volume balance, although that’s not actually the case. Elements play nice together and mingle as they should. Heavy hip hop will shake the subwoofer, certainly a means of forcing some heft to a mix until it finally reaches its aural crescendo in the final act.

That’s where all of the car chases, fire, and flamethrowers (!) come into play, dazzling with a variety of fun if somewhat typical sound design. A flipping vehicle shreds glass into the rears and flames will readily engulf the speakers. It performs to expectations, and it’s much like the video transfer in that way.

One would suspect a video commentary with Jesse Eisenberg, Aziz Ansari, Danny McBride, Nick Swardson, and director Ruben Fleischer would be fun of anecdotes, yet it’s reserved. In fact, the track quickly moves into a period of awkward silence as Eisenberg seems to be staring at the screen in awe. He had not seen the finished product up to this point.

Blowing Up is a the routine studio making-of, complete with rounds of interviews. The Perfect Crime let’s all speak on the action scenes and their involvement. Ten deleted scenes have plenty of room in the brief finished product even if they don’t add much, while three sections of ad libbing are worth it for a few laughs. Sony adds general BD-Live support if that type of thing still makes you excited.