You’re supposed to come away from this “aliens invade London” movie with a message. No, really, a message in a movie about invading silhouette aliens with glowing teeth: The police are morons. Yes, that’s actually what the final moments are there to insinuate.

For about 80 minutes, Attack the Block follows a group of London’s thuggish as they jump a woman on the streets through their survivalist struggle within their apartment complex. Aliens are munching on the locales and begin picking off members of their teenage clique, at least in between their drug dealings and pot smoking marathons.

It’s one thing to develop a different type of hero, or certainly an anti-hero here. Moses (John Boyega) acts as their leader, heading off the invaders while inadvertently being tied up with the woman he tried to mug earlier in the night. Oh how bad decisions come back to bite you.

No matter his background, Moses is unlikeable, intertwined with the local heavies on the drug scene. That’s where Nick Frost comes in, probably the only reason anyone is watching this in the first place. His three scenes revolve around him being high, so you won’t find much from him, and quite honestly, they seem wildly out of place, much like turning this into a message movie.

Attack the Block sort of wanders between the fine line of comedy and drama, mixing in a little horror as it sees fit. The horror, well, it does that right, and not only for the mostly practical visual effects. Scenes captured in a smoke-riddled hallway are truly tense, calming this one down from its irritatingly chase-heavy pacing. It’s a relief when it calms down; that’s when the best stuff is allowed to breathe a bit.

With its constant action, the film never feels like its going anywhere, just a mindless series of chases that happen to intersect with two little kids (a sub plot that goes nowhere) and the local dealer who wants Moses dead. Comedy is rung dry from the scenario, plastered on the posters as “Inner City vs. Outer Space.” Ludicrous as it sounds, it’s barely played for laughs. Audiences have to believe police arresting a mugger is a bad thing, see? 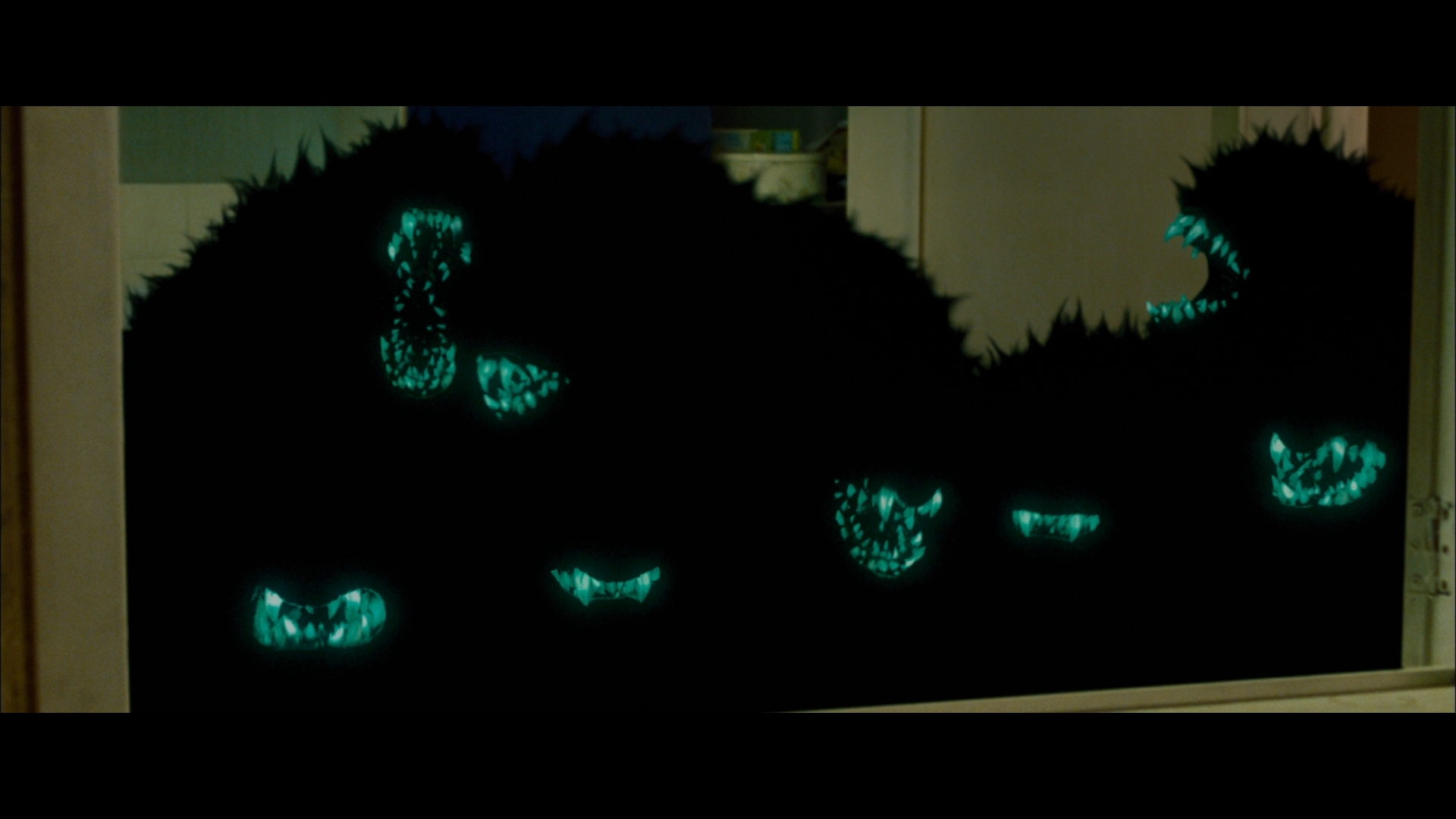 Attack the Block might win the award for ugliest feature of the year, mostly for generating sympathy for these kids and their dominating orange and teal apartments. This could be the champion of the gaudy, so reprehensibly ugly it’s astonishing to see red blood, or red anything really. The film takes place during a fireworks celebration, and even those explosions are two tone. The digital intermediate wreaks havoc on what was probably a fine looking film.

This Joe Cornish directed affair looks as if it were captured digitally, but that’s not the case. Digital indicators? Wonky, off-color black levels and middling mid-range definition. The rather glossy appearance doesn’t do it any favors either, as if much of the grain has become non-existent.

That said, the encode has some challenges, including numerous smoky hallways it must contain and keep clean. Noise is never an issue, even under these complex conditions. Chases and headache-inducing editing never reveal the the disc side of things. Sony has afforded this one an acceptable bit-rate to keep images pure, even if the source material isn’t.

It’s a shame that the feature is so under developed visually, at times even appearing a little filtered. Definition is flat, the occasional black crush not helping matters mind you. Murky feels like an appropriate descriptor, simply tampered with to extreme levels by the filmmakers. The end result doesn’t make much of a case for Blu-ray or color selection.

The DTS-HD mix on the other hand begins firing out of the gate, a slow pan down into the city pushing street level ambiance that ranks highly amongst the best on the market. Cars pan to the sides and into the rears as the street is lost to a zoom. Fireworks pop and positional dialogue swirls as needed.

Much of the score is loaded with hip hop, providing that low-end boost when the action isn’t heavy. When chaos reigns, the mix picks up added steam, aliens slamming themselves into doors, walls, and even cars. Gunfire has plenty of force behind it, and a few explosions devastate the subwoofer.

Dialogue is well rounded and crisp, certainly not revealing any low budget constraints. While there is minimal travel into the stereos as characters recite the alien story to continual non-believers, there’s no loss of fidelity or immersion. Whatever is missing is made up during the countless action battles.

Extras here are enough to make up for everything, movie included. A whopping three commentary tracks are offered, one with the younger cast, another with the older cast, and a third with the producers. Information continues to be plentiful with Behind the Block, an hour long making-of that uses its time well. No promotional fluff here, and it all feels legitimate. Creature Feature is a 20-minute piece on the suit work and how the creature designs came to be.

Meet the Gang is a short intro for the kid actors, followed by Joe Cornish chatting over storyboards of scenes that didn’t make the cut in Unfilmed Action. That’s a Rap is a two-minute blip that has the cast rapping various tunes during downtime. Sony overloads this one with trailers and generic BD-Live access.