Larry Crowne (Tom Hanks) has lost his job, his house, and his possessions, yet remains perpetually happy. In a way, it feels a little cruel, having some fun at the expense of those struggling, but that’s sort of what makes it refreshing.

This movie isn’t a downer despite its dramatic elements. Crowne changes as he is pushed out of his social and financial rut, growing as a middle aged man who reenters college, discovers new friends, and possibly even relationships.

What’s crucial is that the Larry Crowne remains about the title character, such a title insinuating depth to the lead, which yes, is given. Rejected by an employer to whom he gave his all, hit with a nasty divorce, and blasted when filling up his SUV, he keeps his head up. He’s a character that just sort of enjoys being, and that’s a little something we could probably all take away from.

Directed (and written) by Hanks with a calm energy, Larry Crowne doesn’t have a driving narrative force or any distinctive goals. It plays out much like its lead, casual and breezy with brief flourishes of energy. Crowne continues on his life path from one place to the next, basking in what these events bring him.

This is a film that takes its elements and employs them to their fullest, from its peppy opening that sets a personality to an immediate shift into the comedic downtrodden. The play on emotions is spirited with enough downtime to ensure the material is taken seriously, and lifted with Crowne’s own quiet determination.

Side characters surround with Crowne with material and variety, from pokey professional yard salesman neighbors to perky college scooter gang kids. Most of all, it’s Mercedes (Julia Roberts), entering the tail end of a failing marriage, who affects him the most. It’s more than a relationship, but a growing bond between two people stuck in similar ruts. Their chemistry is lively and their screen presence full of vigor, thus lifting this quaint little film to the same status. 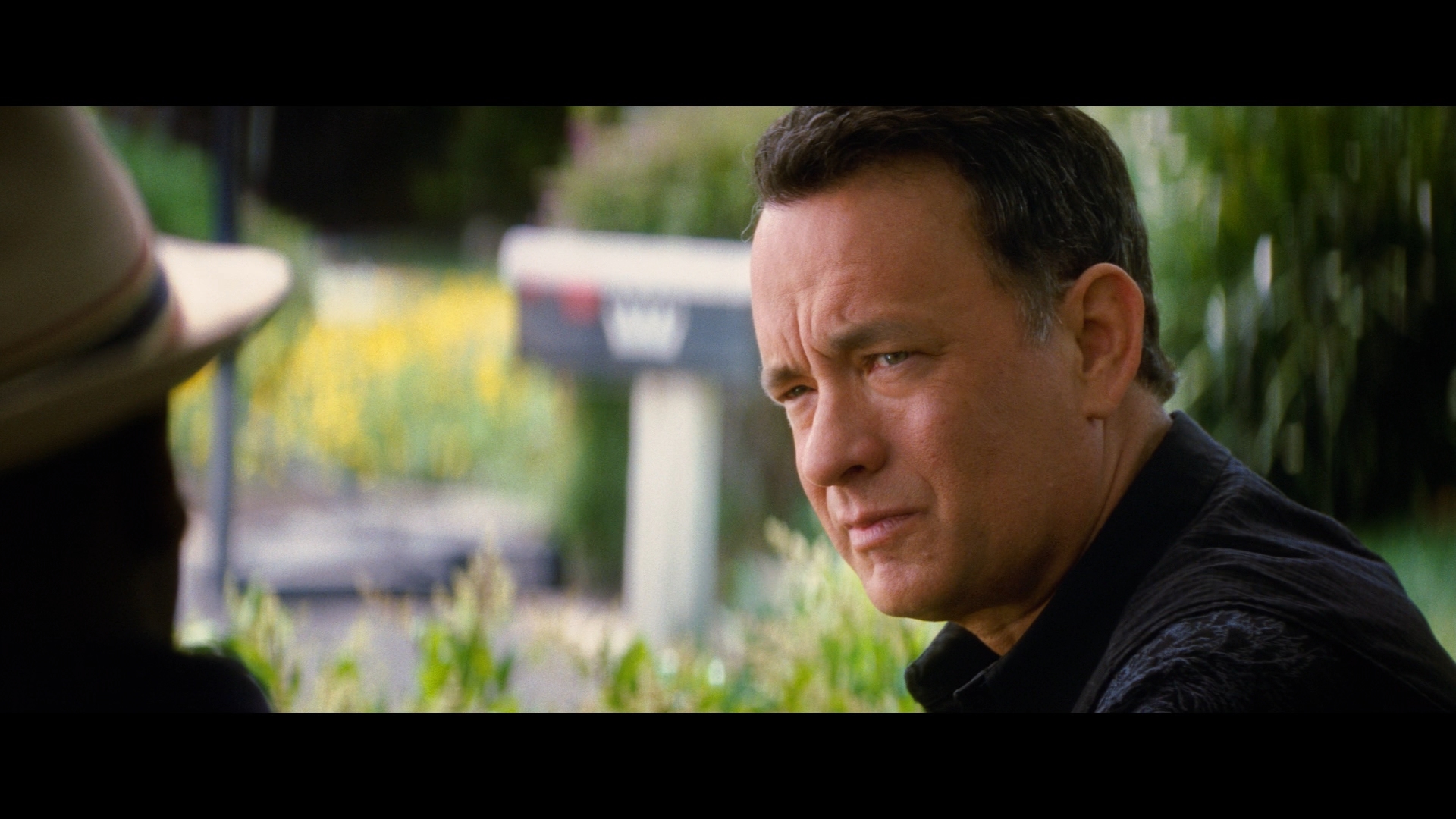 Bright and cheerful, Larry Crowne lands on Blu-ray (from Universal) with a vivid palette that gives this one an instant charm. Saturation isn’t unnatural, merely warm and inviting. Primaries are infused with life, and flesh tones settle into a mostly realistic hue. A few instances cause them to warm up into brutal oranges, quickly quieting down as scenes change.

Black levels are a proponent of depth, adding an intensity to the images and at times zapping some of the shadow detail. A few nighttime scooter rides probably can’t be much darker, the blackness of the skyline as intense as it can possibly be.

This VC-1 encode will introduce a handful of unwanted artifacts, things like a small level of aliasing and associated flicker. The barely visible grain structure comes across as lightly noisy against some of the classroom walls before moving back into its natural state. Certainly with the bitrate as it is, there should be few concerns with regards to compression.

Detail shouldn’t carry concerns either, the disc presenting the photography as a little smooth when dealing with Julia Roberts, realistically textured when Hanks is in close. Exteriors are loaded with fine detail, and medium shots minimalist. The finest qualities are a little wobbly, although salvaged by the contrasting elements that are something to see.

For a talkie dramadey, the sound design is exceptional. Sometimes it’s those little things you remember, like Julia Roberts sending a rock flying before it crashes down in the left rear. Maybe it’s just the clanging of silverware and plates within the diner, or a phone ringing inside the bank, all sounds that place the viewer in the middle of it all. It’s perfect for immersive material that’s meant to be so in touch with the modern American.

Classrooms, especially those headed by George Takei, carry a stern echo, and the music is propped up with lively surround bleed. Scooters travel through the soundfield, and the balance maintains the clear dialogue dead on in the center.

Eight minutes of deleted scenes are followed by a weak promo piece disguised as a making of. Fun on Set is a random collection of clips taken from the filming as the cast and crew goof around. Universal offers a portal to their “no one actually cares” BD-Live page too.