Deathly Hallows: Part 2 opens where we left off, Voldemort (Ralph Fiennes) snatching a dreaded wand from a dead wizard. Warner’s logo appears, and then silence. Death Eaters hover over Hogwarts, eerily waiting for a moment to strike. It’s time.

Ten years of waiting, ten years of battling, and ten years of searching are about to climax. Part 2 is as much a celebration of the Potter franchise as it is a rare look at Hollywood success. Not only has the film series found a conclusion, everything happened smoothly. Behind-the-scene bickering, contract disputes, script disagreements; none of it played a role.

The attention given to the actual product has proved extraordinary, giving those moments of Hogwarts undergoing total devastation a better emotional toll. Magic is freely flung about, giants smash battling wizards, and key characters have their pay-off.

Harry Potter has lost nothing over the years, this despite a conclusion that is more aggressive, brutal, and darker than anything prior. That says a lot, the ups and downs of this fantasy franchise playing with emotions and grim scenarios for a number of films now. Part 2 puts it all into place.

What’s odd then is what we’re left with, the film diverging from the books and turning the Potter/Voldemort battle into a distinctly personal engagement. Expertly crafted as it may be, (an especially spectacular, nearly silent stairway brawl unforgettable), it’s missing the spark. As series draws its final breath, Harry walks through the decimated halls of Hogwarts, all of those characters simply going about their business. No one is celebrating or cheering. It’s as if they didn’t see battle, or already read the book.

Potter still proves magical, a triumph of fantasy storytelling and Hollywood cohesiveness, an impressive feat on any level. The character was in the right hands at Warner, the studio treating him fairly and writer Steve Kloves translating bulky novels into condensed screenplays. Kloves nailed it too, at least until the final moments. Seriously Steve, those people should be thrilled, not caught up in their own conversation. 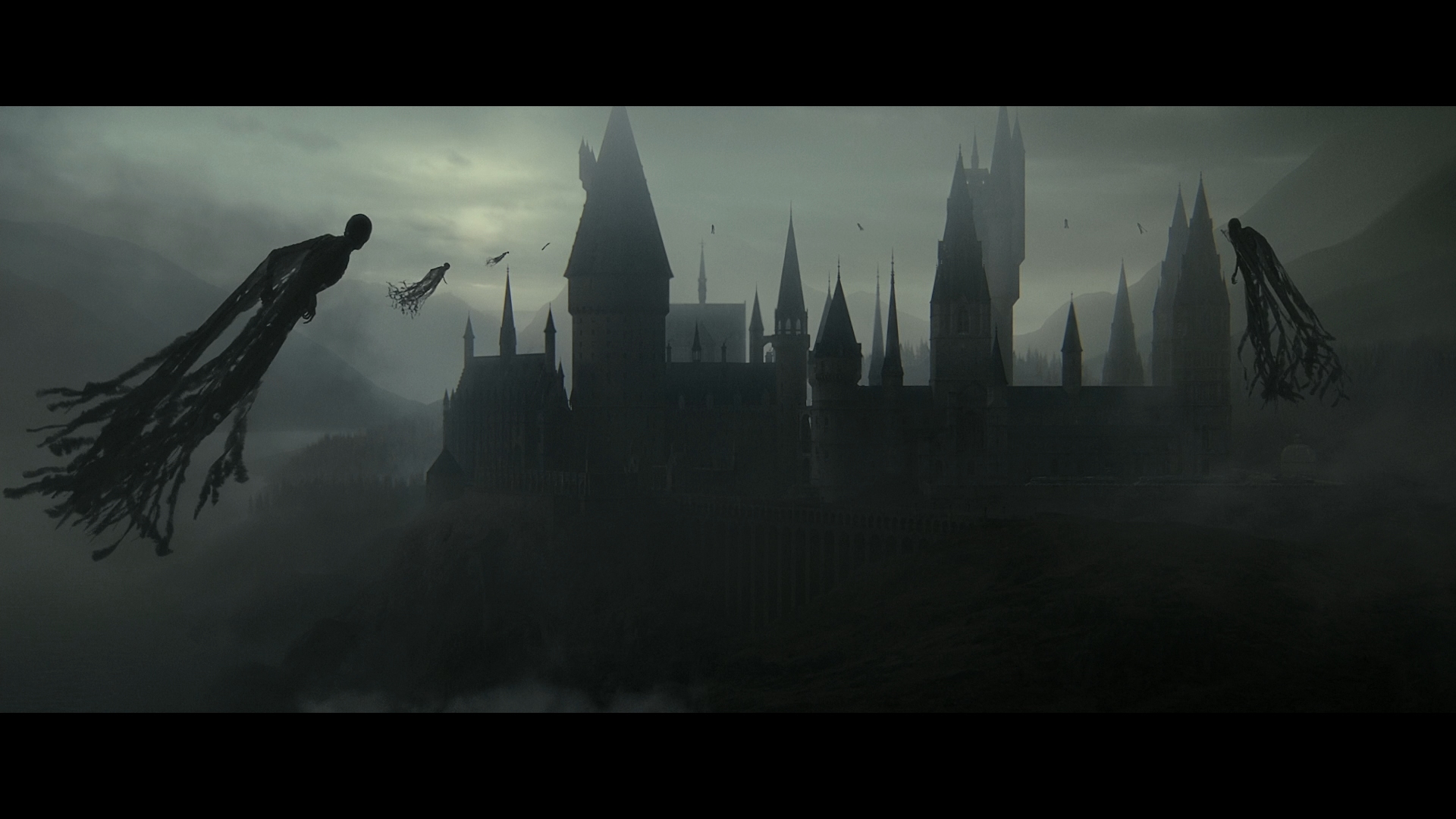 Black levels don’t come any better than this. They can’t really, so lush, rich, and perfect, few discs can withstand such an assault of darkness. The later franchise films have all come with their own brilliant depth and intensity, Hallows 2 a trend-setter for a series that has unfortunately now seen its end. Fantasy or otherwise, few will compare to what this disc does with darkness.

And that’s about it for this affair. It’s certainly unfortunate that Warner has delivered a cramped AVC encode, the disc struggling with an off and on grain structure. At times, it’s elevated to swarming status, covering the faces of the actors in moving dots. Smearing from middling compression becomes dominate during certain head movements, and the smoke pushed out from the final battle is a noisy mess.

Medium shots are certainly filtered, certain effects sequences like Harry’s trip to, uh, “different place” (spoilers and all considered) meant to produce a smooth, overly pure quality. That can be excused. Back into the pseudo-reality of Hogwarts, things collapse. Faces take on a smudgy appearance that is anything but necessary. There’s still about 10GBs of space left on this disc. This isn’t just a battle with the oppressive, mood-setting darkness either. It certainly didn’t appear like this in theaters.

Other imperfections include aliasing and shimmering, more noticeable in the front of the narrative than the back half. Much of the darkness probably obscures it all from standard viewing. There’s an edginess that feels unnatural, highly contrasting images clashing with one another without nailing down a standard quality. Some visible ringing doesn’t help either. Hallows 2 bounces around the hi-def train a little more often than need be.

It’s not like this is a total wash, although a definite step down from the prior Potter effort. Whenever that re-release comes down the pipe, these had better receive proper treatment. As it stands, the best stuff here is up close, a smidgen of facial detail, cloth texture, and make-up definition pleasing. Many of the effect shots of Hogwarts -aerials plentiful here for scale purposes- become stunners too. This is just Warner shoving a disc out there destined for moratorium.

There’s not much to screw up when it comes to audio though, this powerhouse delivering jolts of bass, precision surround use, and overwhelming immersion. All of the expected “wow” moments deliver to par (and well above),things like the magic battles, the fire as Potter and crew escape from snagging the Horcrux, and the dramatically fierce clashes of good vs. evil. That’s all stuff this series has presented before, home theater audiences expecting the world of Potter to spring to life sonically. It does.

It’s the little touches that make a sound mix pop, Hallows 2 adoring the minor flirtations with ambiance. Alarms swirl around the soundfield with such grace, the scene at 25:58 precise enough to replace the static-driven test tone that came pre-equipped with your hardware. Swirling Voldemort voices inside Harry’s head drive the surrounds as well as the stereos, the center capturing the important dialogue. The rest may be ancillary, yet just as stunning.

With all of its booming fights, magical shield take downs, dragon runs, panicked Hogwarts moments, and smashing Horcrux’s, Hallows 2 becomes the definitive demo effort of the eight films, purely based on its consistent effort to show the movie with pure, forceful sound. The score swells, the spells fly overhead, and Death Eaters swarm. It’s what this series has been building towards for story completion and audible bliss.

Spread across two discs, the first houses the best stuff, Warner’s trend-setting Maximum Movie Mode arguably the best bonus-oriented stuff to come out of this home video generation. Beginning with Matthew Lewis and producer David Heyman, this one treks through the entire feature, coming near the three-hour mark. It’s exhaustive. You can also view a selection of Focus Points outside of the Max Movie Mode, eight of them total for 26-minutes worth of content. A short featurette lets much of the cast and crew issue their final goodbyes, truly completing this Hollywood journey. Oh, and BD-Live is here too, as if there’s ever anything of note there.

Disc two’s weightiest piece is a sit down chat with J.K. Rowling and Daniel Radcliffe, coming in at an hour long and providing insight into the whole process of bringing this series to the screen from their perspectives. The Women of Harry Potter is a 23-minute journey into the feminine roles and how they’re brought over from the books. Goblins of Gringotts focuses on these important side characters while a studio tour of Warner London is what it says it is, a promo for the lavish attraction.

Note: Screens contain spoilers, time stamps will be off (working to correct), and .png format is available upon request.