Say what you will for John Cena’s acting career, but 12 Rounds and its enjoyable Die Hard riffing at least knew to throw out everything that wasn’t action. Reunion doesn’t, insisting that a legion of Cena fans are interested in character development. On that note, are movie fans interested in a developed John Cena character?

It’s clear what Reunion is trying to do, shoving Cena into a buddy mash-up with two dysfunctional, on-screen brothers. They’re inheritors of three million bucks if they can hold things together for a few years, the dying wish of their vagrant, apparently loaded father. Off to Mexico these three go though, figuring it won’t work anyway, so why not take down international criminals in a kidnapping case instead? Makes total sense.

Clumsy exposition continues to spill from the printed words, Cena, Ethan Embry, and Boyd Holbrook chewing up the location scenery while seeking a fight. So is the audience. Minor scuffles here and there feel stunted, Vince McMahon’s pocketbook not extending into the budget of this one. Beautiful location shooting clearly knocked this down.

Reunion keeps plastering this sibling rivalry onto the screen, as if the audience hasn’t caught on yet. Familiar routines are as typical as the narrative, ending right where it’s expected to on an Amy Smart role that might as well be considered a cameo.

There’s some clunky message here about the economy, the kidnappers holding a one percenter hostage after he tanked his company, putting hundreds out of work. One of those hundreds simply took it personal, setting himself up for the sarcastic, “didn’t see that coming” villain turmoil to come later. Greed amongst the evil doing archetypes misses the point of the loosely configured purpose anyway.

All of this is leading to a stunt-riddled climax, certainly not impacted by a small sense of scale, and to the shock of no one who has ever seen a movie, the brothers patch things up. Don’t cry spoiler; it’s clear from the opening funeral where this thing is going. Oh, and no matter how hard it tries to make a link, Reunion is no Bonanza 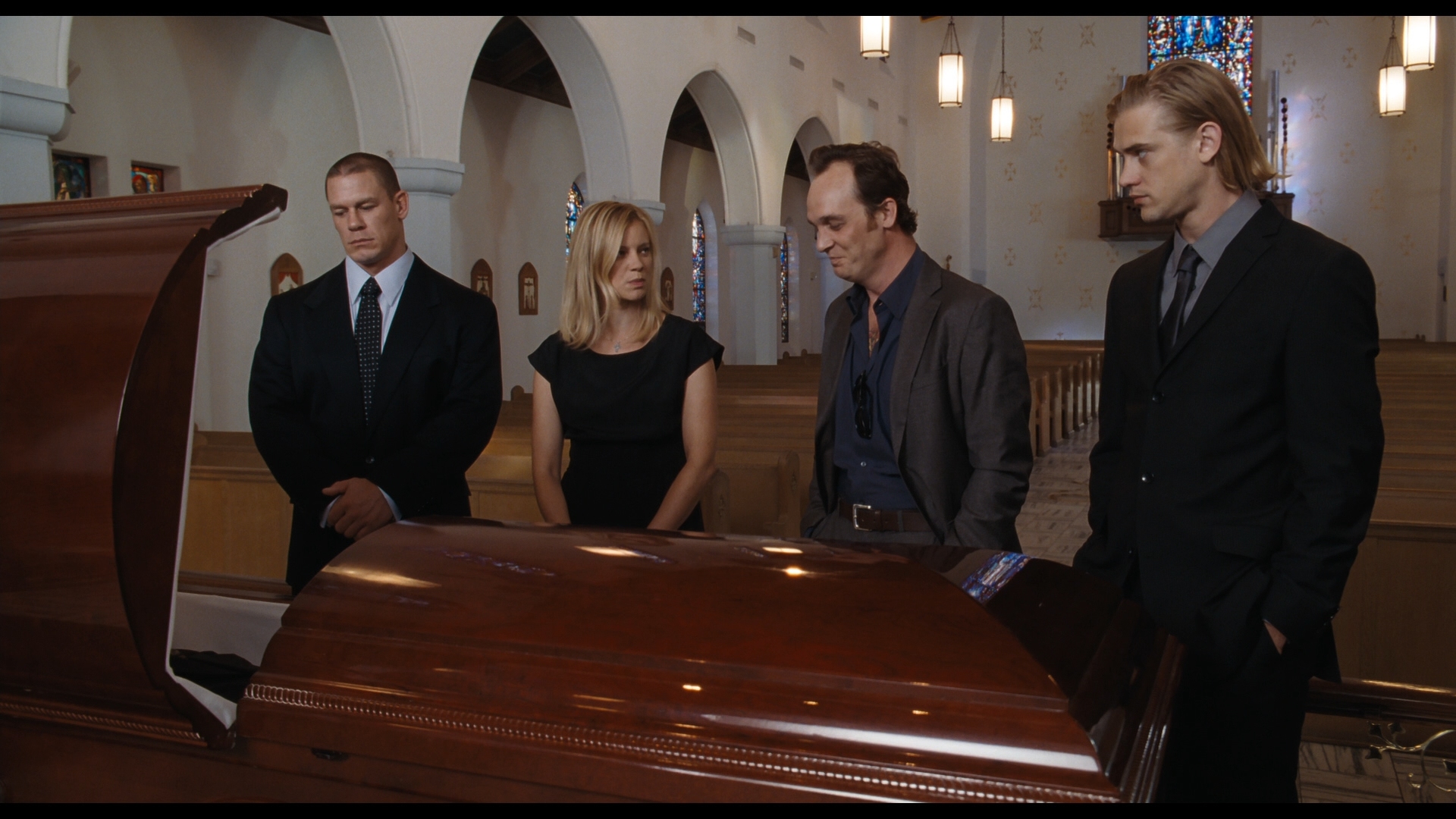 This WWE effort seems to have been captured digitally, the mid-range the giveaway. It’s no surprise some of the women in the cast look plastic (mostly because they’re made up of 50%, surgically implanted plastic), but the rest is a source problem. This isn’t something that’s squeezing in here and there, but a constant presence that kills the otherwise pleasing level of definition sprouting from this one.

Clean seems like a logical term, the AVC encode never hampering the pristine quality to these images. Source noise is never apparent, even in the dimmest parts of the image. Pure, rich black levels help the extensive nighttime shooting, keeping those usually problematic aspects… in the dark.

Exteriors are free of general imperfections, certainly moving away from the edginess that dominates the earlier sequences of the movie. The funeral displays some clear halos, struggling to cleanly replicate the the edges with contrast. Once cleared up, image sharpness holds without faltering aside from a few moments of focal fuzziness.

Colors are given natural hues, saturated skillfully and carefully. Primaries have some weight, and flesh tones are devoid of any outrageous oranges. Desert locales carry appropriately dim plant life, and sun-baked sand has a nice warmth to it. Pleasing all around for the most part.

With video given a clear focus, the audio is sort of sidelined into mediocrity. No, there’s nothing technically wrong here aside from an occasional piece of dialogue that comes across muffled (36:30). Modern techniques and fidelity have rendered the technical side of things so proficient that it’s rare to listen to a bomb anymore.

That said, Reunion needs a bomb, or anything really, to spruce this middling audio design up. Bass is present, a grenade toss nicely hitting the sub with force, and there’s a hotel explosion that will follow a similar path. A strip club and its bassy hip-hop will wake someone up too, and that’s about it.

Despite some pleasing, wide separation between the stereos, the surrounds are just dead. A handful of shootouts never ping a single bullet behind the viewer, and off-screen shots barely leave the center. Vehicles never travel outside the fronts and the score can’t bleed out. It’s all mixed and balanced well, just cheaply constructed for something intending to be an action powerhouse.

Like shameless promotion? Reunion is for you then. Three Amigos praises the leads en masse, while Saddle up ‘n Giddy Up rains more on the proficient horse training. Rough Takeoff, Smooth Landing is probably the best piece here, detailing the stunt work of the finale. Brothers in Action dives (literally) into the stunts, followed with Get (Amy) Smart, all praise for her three or so scenes.

New Mexico Mystique plunges into the location shooting, Soul Patch Mates revealing a bond between the crew, and it’s all concluded with a photo gallery.