The rule of animated sequels goes that the secondary comic relief takes over when going direct-to-video, otherwise the lead maintains narrative control. Rules, however, are meant to be broken.

What’s odd is that Pixar did it, not the first shot in this Disney assault of milking the franchises. Disney has Planes (withing in the Cars universe) coming in 2013, and a Monsters Inc. double up due soon, so we’re far from done. The smart bet was to kill it here with Cars 2.

It’s fair to say this spy saga is graded on the Pixar curve, reaching unforeseen quality heights until this one came along. Mater (Larry the Cable Guy) taking the reigns means the guy responsible for Witless Protection now sits alongside the prestige of Michael Caine. Commence banging heads against hard objects… now.

This inane follow-up is riddled with miserable dialogue, British agent vehicles unable to see past Mater’s eccentricities to figure out he’s a dolt despite clear evidence. It’s the old mistaken identity bit, which is fine by itself. It’s not as if the first Cars wowed audiences with its majestic storytelling.

Cars 2 is the odd man out though, riddled with bullet holes, explosions, and a Pope mobile. The twisting message speaks out against alternative fuels, going so far as to toss out the treehugger bit. Lightning McQueen (Owen Wilson) returns as a premier racer, following his same character arc as he puts on his superior glasses to gloat over all.

Endless chases let Mater wander around fabulous world locales as an onlooker, inadvertently leading to the take down of a master criminal organization, which merely muddles the message further. Big oil is bad (or is it?) and being handicapped requires underground criminal actions to fix? Maybe that’s digging too deep into this animated pit, but once Cars 2 decides to bring up discussion of dinosaurs, all logic bets are off.

Actually, wait. If the Cars are in our world and our places, that means there were dinosaur cars, right? That can only mean we’ve found reason enough for a sequel. 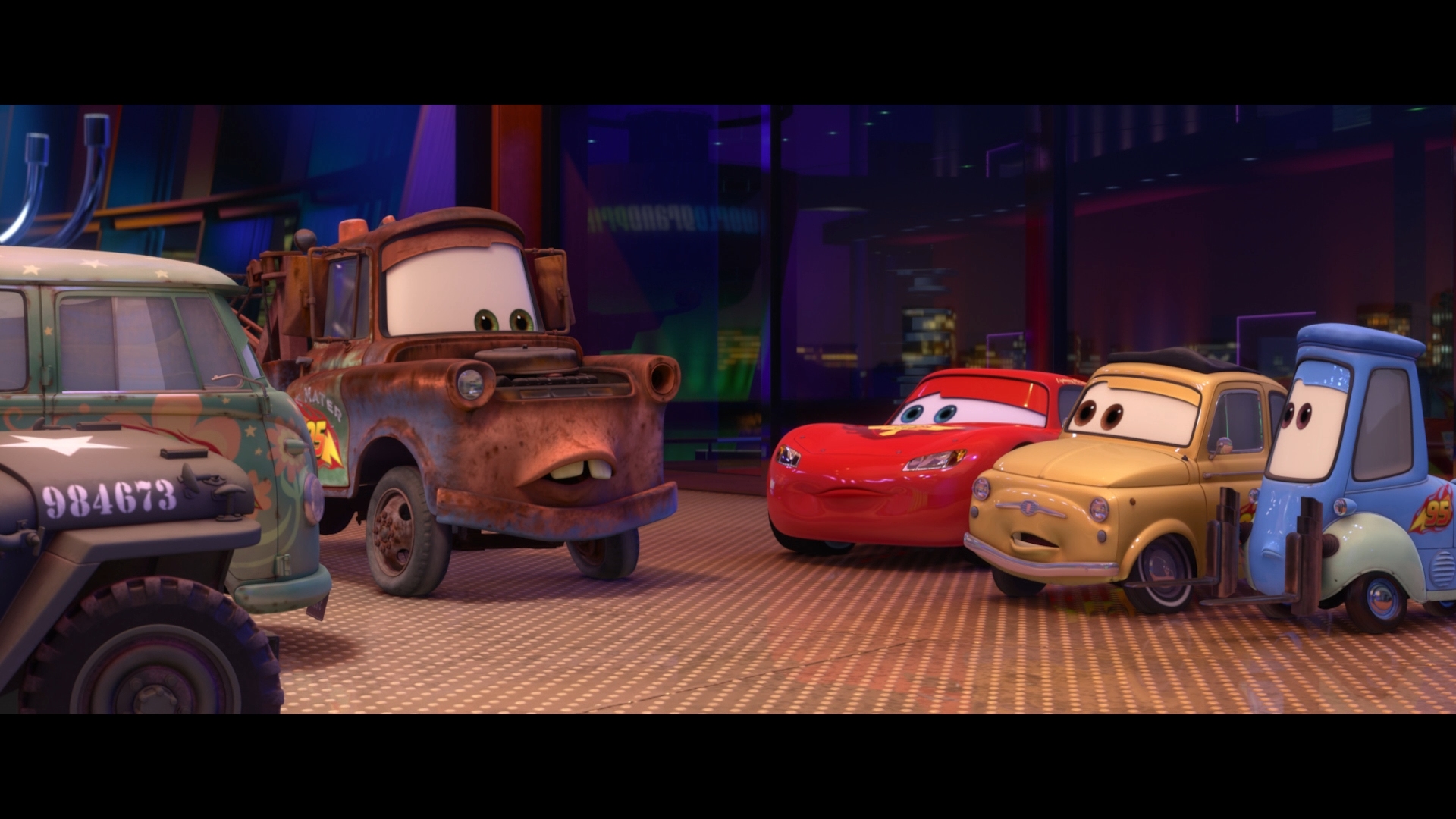 Pixar knocks this one out with a one-two blast from the opening gate. Cars 2 intros on the night-drenched choppy high seas, British Intelligence towed by a boat (wait… Cars 4: Boats!), black levels proving exceptional. Take that back, because exceptional doesn’t even fit. They’re stunning, perfect, and flawless, keeping a keen eye for virtual shadow detail and crisp light sources. This is clearly generations above Cars’ first outing in terms of the tech powering it, the benefit to Blu-ray all in the details.

As usual, Disney’s pristine AVC encode exists to astound, maintaining integrity during busy, motion-heavy pans of cheering fans. Water splashes and their intricacy are superb down to individual droplets, and races with their weaving cameras keep motion blur properly maintained.

Loss of color is a non-concern, the somewhat darker vibe of this sequel effort leaving saturation untouched. Surely it’s important to keep vehicular combat and manslaughter as sugar coated as possible. Flames are rendered in brilliant oranges, McQueen keeps his intense reds, and Mater the rusty brown. Sequences on the Tokyo streets astound with their beauty, neon lights shining down on the characters as they look on in awe. Blu-ray enthusiasts will share the excitement.

Mild aliasing is the only chip in this disc’s otherwise unfaltering appearance, car grills shimmering slightly as they take on angles. Detail is otherwise immaculate and unaffected by any resolution drop from the theatrical rendering, clarity something that should be appreciated and hopefully replicated by all CG efforts. There’s always something special about Pixar discs, and apparently, that holds true even when the movie is a dud.

With all of the razzle dazzle imbued in these chases, it creates opportunity for a whallop of an audio mix. Job complete. Cars 2 fires off its opening blasts in a matter of minutes, the spy car discovered and chased, guns blazing and oil rig barrels blowing up. Flames flare and rock the subwoofer, car engines lovingly passing through the stereos or surrounds.

This is a loving relationship between a plastic disc and high-powered electronics, splitting everything into a separate channel, even the dialogue. Cars chatter on even off-screen, the DTS-HD 7.1 mix never afraid of panning things to the sides or behind the listener. Everything is contained where it should be.

Animation benefits sonically from a tighter grip of control over the material, allowing for a little more fanciful freedom when it comes to making these things a blast to listen to. Despite its overbearing focus on vehicle chases, there’s little doubt that they all sound distinct, even if it doesn’t look like it. Then there are the subtle moments like the interior of the clock tower at 1:16:00, voices pinging off the metallic innards with grace and purity. Cars 2 does everything right.

Bonuses open with a fine commentary from co-directors John Lasseter and Brad Lewis, then begin a slow descent into near-nothingness. Hawaiian Vacation is a Toy Story short, arguably better than all of Cars 2, that followed by another short called Air Mater. This one welcomes all to promo-land where the Planes characters can be intro’d. Tons of trailers are here too if you so wish to delve into those.