It’s refreshing to see a super hero embrace his roots. Steve Rogers (Chris Evans) is pushed into a government program, bulked up in a matter of minutes, and then dons the classic Captain America suit and shield. He doesn’t turn it down or reject it for the sake of modern audiences. He embraces it, an entire action scene given to Cap with the iconic garb, creating a segway for Hollywood’s recent spin.

In the end though, it’s all just marketing, the subtitle being, The First Avenger. This is the latest in a Hollywood training session, telling audiences they’ve paid for a two-hour advertisement. If you didn’t see Iron Man or Thor, the tech speak that is glossed over here becomes more a mystery without an answer. The films in this current super hero cycle are not even allowed to breathe or stand out on their own.

It makes the origins stories increasingly relevant, Captain America not ashamed to spend a rather glaring amount of screen time with a young, scrawny Chris Evans, easily the most seamless and impressive effect of the film. Stanley Tucci is also fantastic and witty as a German-born doctor, the film eating up his performance much like the audience, although not enough to salvage an overlong first act.

Once the red, white, & blue takes over, Captain America sees the light, toying with a pulpy, serial-like montage of Cap and his chosen crew tearing into the menacing Hydra forces. It gives this summer spectacle a kick and dose of needed scale, our heroes super strength dwarfed by gargantuan Hydra technology.

Hugo Weaving also hams it up as the devious Red Skull, some capable make-up giving the somewhat supernatural being a dangerous flair. The always capable character actor Toby Jones takes his Igor role in stride too.

Of all its success and failures, Captain America captures the spirit, and reinvigorates the character for its true purpose. Current world happenings can’t change what Cap stands for, nor can the characterized WWII ’40s setting. The stars and stripes take front and center, the camera lapping up the moment as Evans passes by in slow-mo, the movie zapping all who watch with patriotism. Captain America never tries to ignore that or dim it with some downtrodden, depressing palette. It’s colorful, it’s fun, and it’s for America damn it. 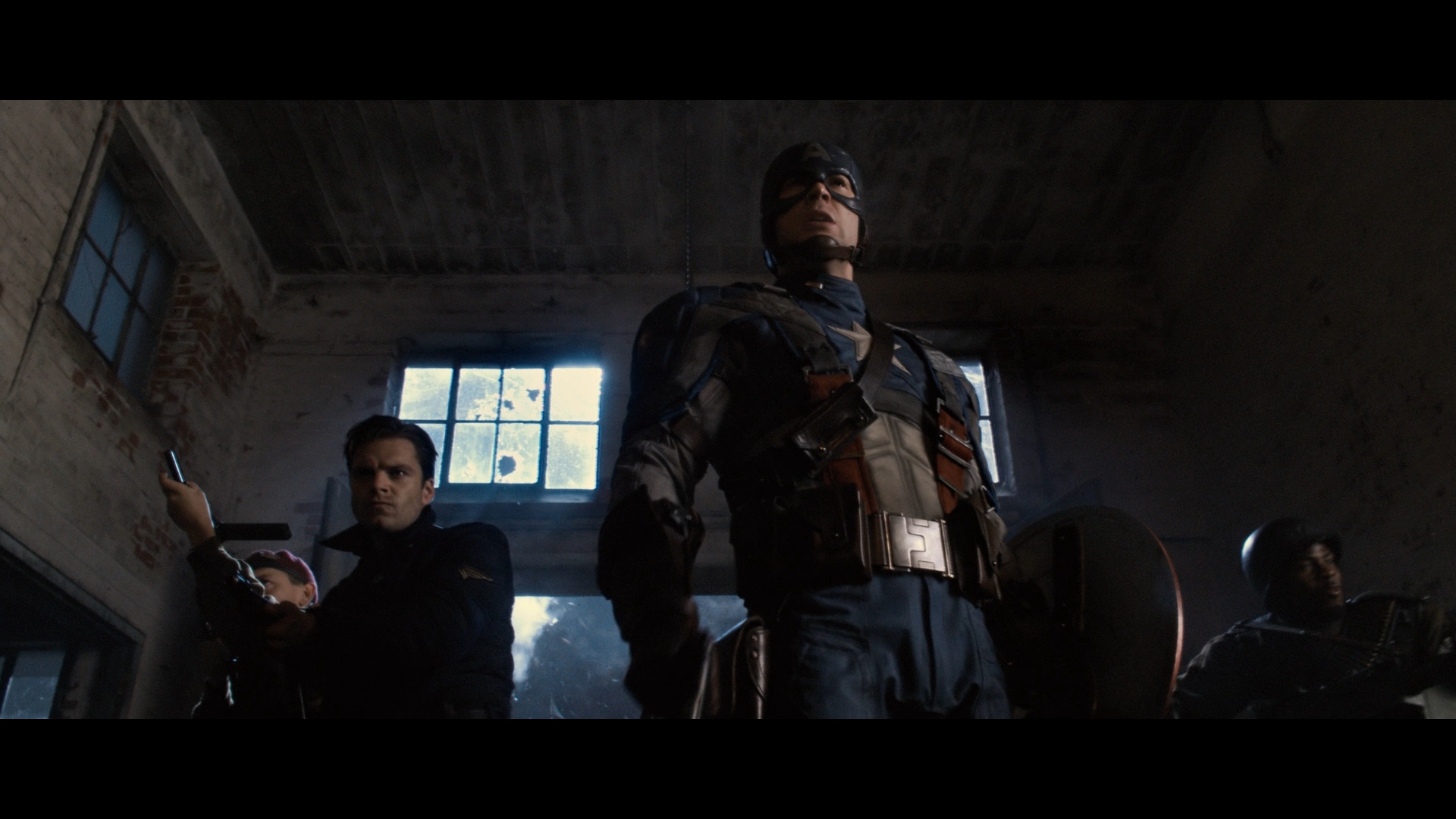 Captain America uses a little bit of everything, from film to digital provided by the Panavision Genesis. No one will argue that the movie doesn’t carry a consistent appearance, few scenes standing out for any form of inequality. Unfortunately, it’s that standard that begins to grate, Cap never appearing like its bursting at the seams with definition, or the fine detail it certainly requires to play nice with its eventual Avengers brethren.

To be clear, Cap looked like this in theaters too, a bit of a mushy mess obsessed with orange and blues (instead of red, white, and blue, because that would make sense), a vintage faded quality, and smeared fine detail. Also an irritant is a bumped up frame rate that is all over the place, as if director Joe Johnston can’t decide if this is a movie or a documentary of on-set footage. Maybe Captain America has joined a soap opera. It sure looks like it.

It can be conceded that the black levels pop this sucker beautifully, adding weight to what are drab images. With few exceptions, even the contrast won’t find any real potential. Captain America doesn’t look like it wants to live in a world of vibrancy or visual intensity.

There’s nothing wrong with the clarity here, the digital affording these images a pure spark without succumbing to noise. Even the film-based stuff doesn’t appear to have any grain associated with it, which could certainly explain the consistent look and flubbed detail. It’s not that Paramount did anything wrong, the AVC encode completely out of the picture, but all of this drops back to the source material which is boring and tired. That said, it looks like it should, even if it’s not pretty.

Thankfully, there’s this brutal DTS-HD 7.1 mix to liven this party up, Captain America the type of movie where things love to explode. There’s no shortage of boomy, deep bass here, from the explosion of Red Skull’s first facility to the sounds of vehicle engines. Flack being bombarded on Cap’s plane before diving into enemy territory is nothing short of epic, and all of the electricity generates a sufficient hum. That said, the booming jolts of The Avengers trailer post-credits is utterly absurd. Who cares about balance when there’s a movie to sell?

There are plenty of robust uses of the surround channels as well, although those additional two could probably use a bit more space. They tend to stick together as a tight nit group, bellowing left over music that didn’t pan by the stereo channels or keeping up with roaring flames. Most of the gunfire, whether its pinging off metal, evaporating soldiers, or just passing through feels focused on the traditional rears.

Captain America isn’t a failure for that; if anything it’s doing it right, keeping the mix wide without over focusing its war efforts on two newcomers. Balance with the center channel amongst the chaos is satisfying, and the stereos love to play with passing cars. There’s a lot of energy passing through the soundfield here, enough to bolster Captain America’s Blu-ray stock for sure.

Joe Johnston gets involved in a commentary track, joined by his director of photography Shelly Johnson and editor Jeffrey Ford. Marvel One Shot serves as a sort of deleted scene between this film and Thor, but let’s face it, it’s a short ad for The Avengers. Six featurettes make up the bulk of the bonuses here, ranging from bits on the suit, actors, make-up, and *gasp* The Avengers. Shocker. It’s all the usual studio fluff.

If you want actual content, you can check out the deleted scenes, more interesting than usual as they have notes clearly visible that indicate what needs to be done in post to fix the scenes. If you want, you can carry the commentary over to these as well.