And so, it would seem, was the realization that popped up for Jurassic Park III. Casting William H. Macy as a swindling father, an absurdly campy finale suggesting the Raptors pack hunt as a surrogate family, and completely trashing the hallmark Tyrannosaur that had fed the prior films, it’s hard to fall from grace any harder than this.

You know what though? It’s a damn fun movie. Jurassic Park III is wildly absurd, gloriously over the top, and could care less about anything resembling science, character, or plot, but it knows what the audience wants. It’s as if someone remade Jaws and decided all the chatter was too boring, letting the shark run loose the entire film.

Lost World tried something similar, but missed an opportunity to exploit the dinosaurs-run-amok concept by trying to be moody and logical. Jurassic Park III tosses nighttime aside for broad daylight attacks, the only mood coming from a foggy Pterosaur battle on their own turf, the rest sheer spectacle.

There’s no mystery to the island, no questions left about the technology used to create them, or why the critters live on. All that’s needed is for them to feed, and feed they do, taking out ancillary characters with a rare B-movie grace and A-movie capable effects. What did everyone remember from the first two Jurassic Park movies? The lawyer being swung around like a rag doll in the T-Rex’s mouth, and poor Eddie getting ripped in half by the parent T-Rex unit in Lost World. Jurassic Park III’s dinos kill just because, and even brawl amongst themselves because people getting eaten gets old after a while.

The script for JPIII was ditched a few weeks into the shoot, trimmed down to something a little more personable, not that anyone cared. The freshly designed Spinosaur, somehow glanced over in Lost World, is the star here… well, that and a satellite phone that somehow keeps ringing inside the carnivore’s stomach. Wireless coverage on Isla Sorna rocks. 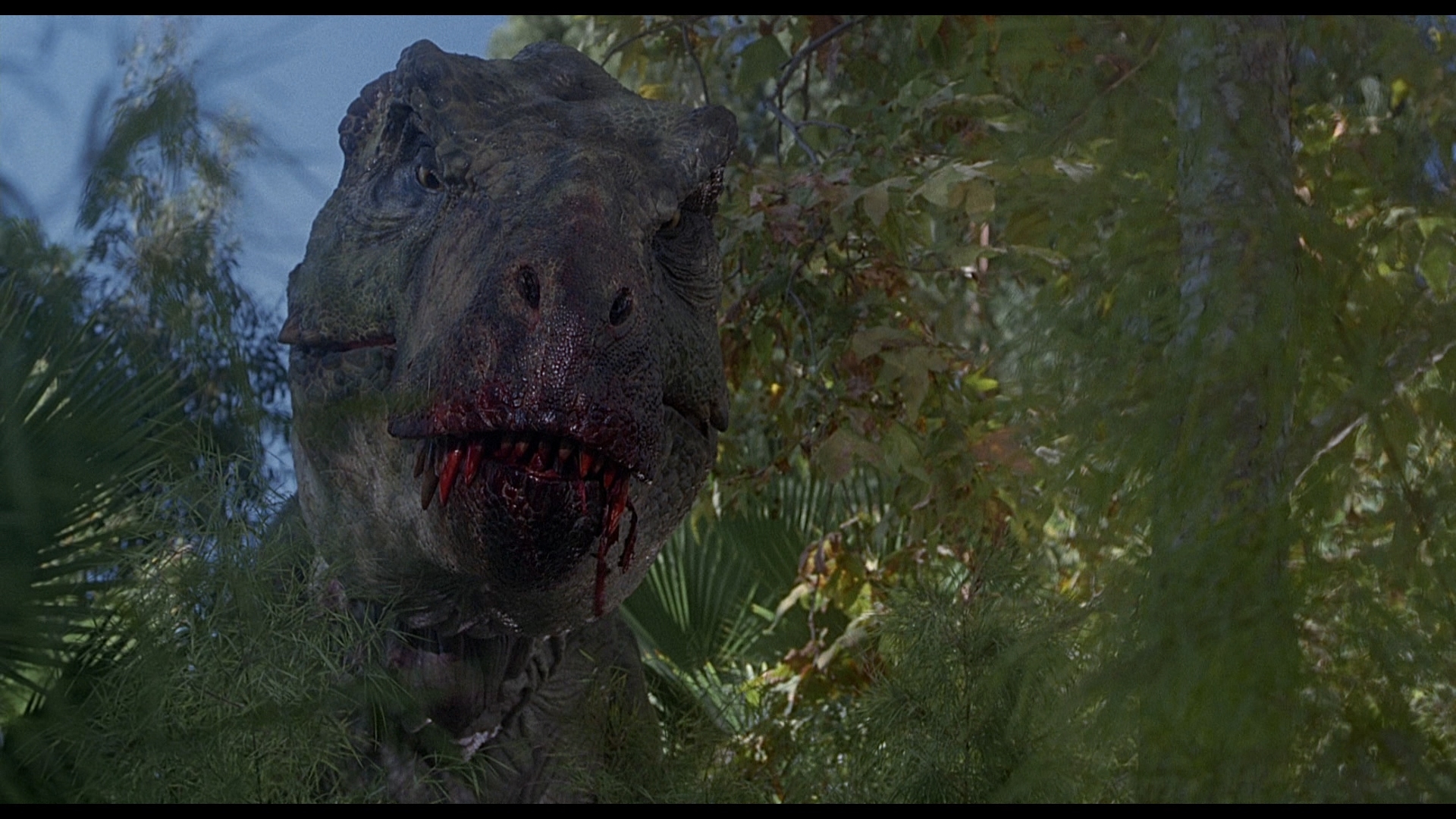 Universal, unable to leave well enough alone, is likely trying to cover up another dated scan with this Blu-ray VC-1 encode. Sharpening once again rears its head, leading to identifiable halos around any high contrast edge, unmistakable as the flight crew tests their weapons against a junk plane at 10:22. Dark lines creep into other sections, surrounding actors as if they were cartoons.

The lazily handled after effect complicates things, especially those jungle aerials and exteriors. Definition is glossed over, replaced by a fuzzy, murky, and muddy appearance. So much for natural beauty or respect for the visual effects team. It’s much easier to cover up a lack of funding or time given to the team working on the Blu-ray release.

Jurassic Park III can stand toe-to-toe with the first entry in the series visually, both with similar qualms. Grain is clearly elevated from its unobtrusive status to an in-your-face punch. Resolution alone preserves what matters though, that being some sterling facial detail in close, and again most of it coming from Sam Neil. Medium shots retain a filtered, processed, and unnatural look, faces plastic-like.

Color feels over cooked too, greens coming across like they’ve been in the oven too long. Plants don’t carry such a neon-hue, and flesh tones are sickly bright. What is gained in intensity is lost when looking for anything that resembles reality. All of that out of the way, black levels feel the most controlled of the bunch, rarely slipping to take down some of the shadow detail. They have enough bite to capture the needed depth, proving that yes, Universal is capable of showing restraint.

Take your pick of the action scenes to digest the majesty of this DTS-HD 7.1 powerhouse. Any of them will do. Want the first Spinosaur attack on the plane hull? Very well. Get ready for immense stereo work, what’s left of the vehicle spinning around, tons of objects being audibly carried from one side to the next. Roars emanating from the dino rock the subwoofer, and its footsteps are no joke either.

Maybe the finale is more your style, the rain effect the best one yet, and rushing water on the terrorized boat flawless. The hungry critter is a constant presence and so is the storm overhead, because every Jurassic Park needs a hurricane. Clanging metal completes an enveloping underwater effect that is as aggressive as they come.

There are picky people out there though, so maybe all of this action isn’t for them. That Don Davis/John Williams score is what matters, beautiful yet again in its majesty, not to mention a more constant presence. If it’s not coming alive, the jungle is, loaded with insects and birds set into a chirping frenzy in those surrounds. Mixed with the separation of the added rear channels, the immersion is flawless.

Jurassic Park has little subtlety, more interested in knocking socks off than scaring them. For those with a more acquired taste, it’s heartily recommended to skip to the Pterosaur intro, the creaking bridge, moody winds, and slow walking of the birds terrifying just before this audio sensation kicks itself back into full gear mode. The decade that has passed has caused no loss in fidelity, the bass remains pure, and the highs reach their peak brightly. Reference stuff for a third time.

Jurassic Park III is the first in this trilogy package with a commentary track, bringing in a roundtable of special effects crew members to piece together how this was all done and in-depth. For those DVD owners, that’s not freshly created material. For that, you’ll need the final piece of the Return to Jurassic Park, a 22-minute documentary on the sequel’s ideas, purpose, and who was involved.

The rest is a complete copy of the DVD, and since that was loaded, there’s nothing wrong with that. The Archival department breaks down into seven sections, another 22-minute making-of, followed with pieces on the dinosaurs, special effects, ILM, audio, artwork, and an ILM press reel. There’s a final bit on the discovery of new species in Montana.

Behind-the-scenes also splits into seven different areas of interest, including multiple studio tours, scene deconstructions, storyboards, and set photos. D-Box users are in for what is certainly a great ride, while trailer and BD-Live fans are appeased too.