I grew up on a steady diet of Godzilla, Ray Harryhausen, and ’50s giant bug movies, something there is no shame in admitting. Creatures were movie spectacle, the type of thing that kept a kid glued to the screen between homework sessions, and sometimes, even during them.

You learn something as you grow, and that’s other people don’t share the same passion or interests in those “cheesy Japanese movies.” They were brought up on Hollywood’s modern spectacle, and there’s nothing wrong with that, perspective and all so crucial when looking back.

Something happened in 1993 though, some sort of justification or even vindication. There, on the screen with Jurassic Park was what I saw when I watched Beast from 20,000 Fathoms or Godzilla. Not only was it me, but it was the whole world who was suddenly enlightened by what the creature feature could be, entertained and frightened at the thoughts it presented. It wasn’t being bashed for having a rubber suit or “jerky” animation. It’s like a light went off, a light that had been lit for a little over decade in my own mind.

No, Jurassic Park didn’t lead to some wide Western acceptance of Godzilla, although it did lead to that American remake which certainly didn’t inspire confidence either. What it did was instill a sense that it was okay to have a monster running amok, munching on helpless civilians, and Steven Spielberg behind the lens directing it. It was okay for a major author to write about monsters, because out of nowhere, one movie transformed a dormant genre and gave it prestige.

It’s impossible to overstate how much Jurassic Park meant to the film industry, and it’s too easy to begin rattling off a series of films it then made possible (Godzilla ’98 not withstanding). Spielberg and Crichton in tandem proved to be magic, crafting a film with such grace and spectacle that even its wide-eyed flubs don’t affect the illusion of reality. No matter how cynical you are, the music-less T-Rex assault within hurricane conditions never calls into question how the sunroof glass regenerates between slams, or how there’s a sudden 30-foot drop next to the retaining wall. There’s too much tension to care.

Back in 1993, it was stunning, but greatness is defined by age, something nostalgia can’t even overcome. Jurassic Park is graceful, its effects used with a purpose and limitations inspiring imagination. Swapping between animatronic and CG beings create what are now obvious lapses in visual stability while preserving the wonder of everything that came before it. And yes, that means means Ray Harryhausen’s Beast and Toho’s Godzilla. 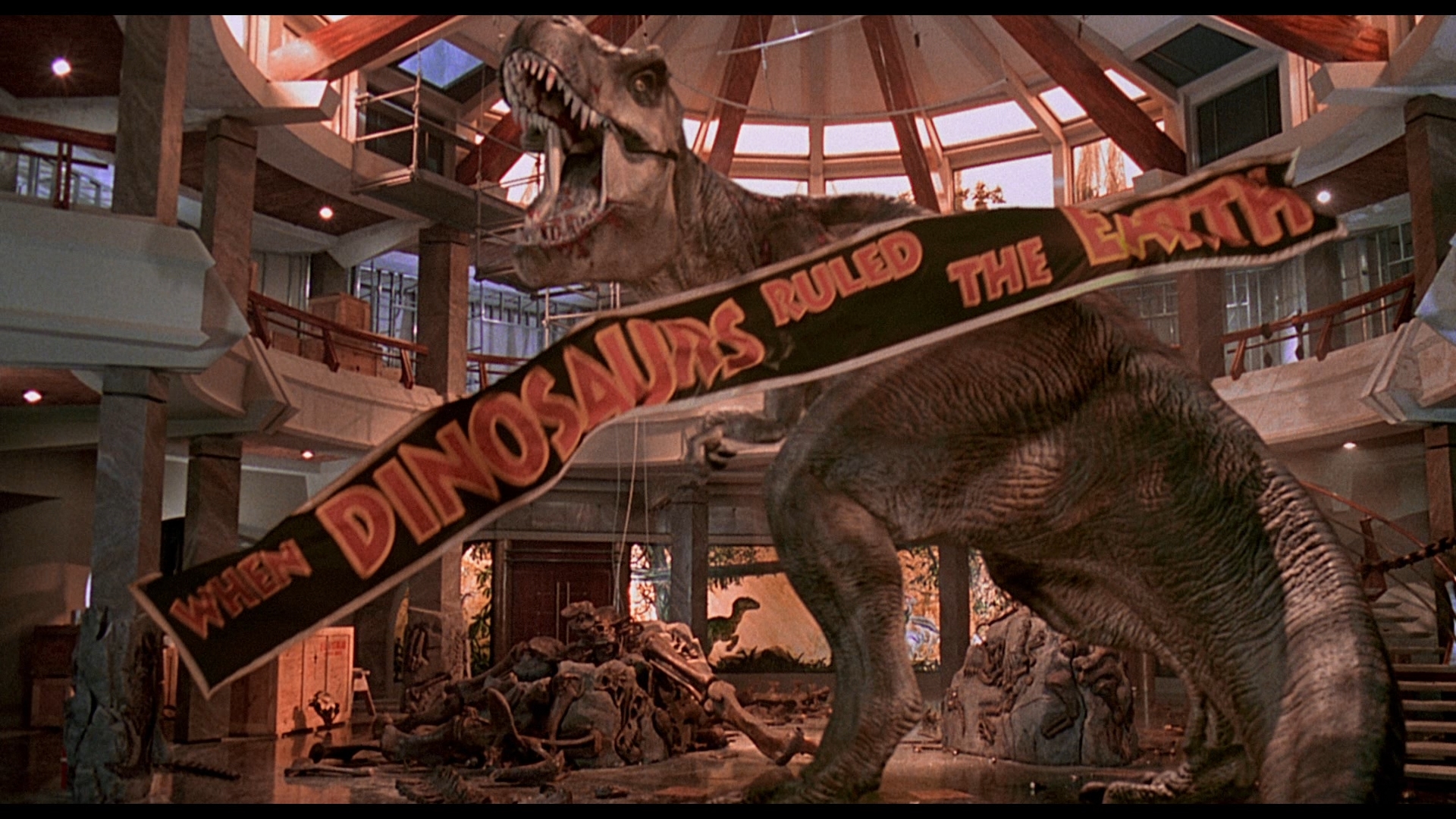 It’s relatively clear that Universal has been sitting on this one for a while. A few HD television screenings aside, it’s doubtful anyone would question the studio was considering the Jurassic Park bombshell that would have been exclusive to HD DVD. Not that they cared anymore back then about their catalog, but this VC-1 encode, aside from a bitrate that probably wasn’t attainable back on HD DVD, is probably what they planned to issue.

That being out of the way, Universal pulls a marginal Universal here (?), Jurassic Park afflicted with a smidgen of their usual tampering, and like Star Wars, it is inexcusable for a release of this caliber. Compression doesn’t help a heavy grain structure, and the sharpening only compounds the issue further. The interior walls of the control room are a mess of swarming artifacts, the type of stuff that give people a negative connotation about natural, pure film grain (which this is clearly not).

Said “enhancements” lead to marginal halos visible mostly against the brighter backdrops, and then going further some mosquito noise that is blatantly obvious as Grant arrives to check out the Triceratops. Medium shots carry the now familiar processed and filtered appearance so applicable in just about any catalog Universal review. The plants that cover the island’s surface are a mess, the only shots where it could be acceptable are those with heavy visual effects such as the stampede.

All of that said, this is not a clear cut HD disaster. Jurassic Park has a pile of positives going for it, and it’s a relief to even type that. Close-ups prove outstandingly defined, crisp, and suffering from little of the digitization seen elsewhere. Colors have been left to their own devices, primaries given a burst without becoming a distraction or annoyance. Nothing here feels elevated over prior presentations.

Black levels do feel heavier than in the past, crushing some of the shadows against their will. Goldblum’s black outfit is a consistent cause for alarm. The source print is relatively unscathed, minor specks of dirt intruding on the movie that require at least a single pass, something Jurassic Park should have been given. One would expect any current restoration or scan to pick that stuff up. In a lot of ways, that makes this release a bit of a joke, but in another, results matter. Whatever year this scan was done, it was done well enough to make an impression and survive the typical Universal drubbing.

While the addition of two extra surrounds doesn’t make a grand impact on this innovator of DTS, it’s nonetheless a reference disc amongst reference discs. For years, the Laserdisc of Jurassic Park was a grand champion of audio, partially because of its absurdly deep bass, something the DVD was lacking. The Blu-ray seems to jump back and forth between the two, the opening Raptor attack in the cage jolting the film to life with a bit of a balance concern, the first T-Rex assault bringing this one down to reality.

Nothing here disappoints though. The opening Universal logo isn’t brought forth with fanfare but with insect sounds. It’s enveloping from the start, something modern films try to mimic with such flair. Ominous drums blast the subwoofer to hail one of John Williams three greatest achievements, and the uncompressed glory comes alive from there. The score contains little flourishes that at home were never this clear, stereos bellowing triumphantly one of the themes they were made to reproduce.

Jurassic Park never loses sight of its audio, always paying close attention to its environment and fidelity. There’s not a day of age audible here, the mix as modern as the film itself. The T-Rex assault is heralded by the incoming storm, low rumbles of thunder heard in the surrounds. Rain becomes a character in itself, hammering the car’s roof. Raptor attacks in the kitchen remain virtually visible with keen directionality from their light grumbles and clumsiness. As expected, the anticipation is all worth it, those heavy doses of visual effects greeted with all the flair they need.

Aside from a handful of quibbles, namely the overpowering nature of certain sequences (the opening and Raptor feeding time later), this is everything the hype and wait has been heading towards. It’s officially time to retire prior editions and welcome in the dinosaur epic to end all dinosaur epics.

Return to Jurassic Park signals the beginning of new stuff for this Blu-ray set, each disc containing their own sections, the first movie having three to itself. In terms of length, these three fresh pieces of bonus content pass the hour marker, reminiscing on how the experience changed filmmaking, all spliced together with footage taken from the set. There’s a lot of passion behind this one (or three technically), not the usual babble about how great everyone was to work with. Spielberg even admits to some of his own mistakes, like working on Schindler’s List concurrent with JP.

A section on archival featurettes pulls in the DVD features of old, including the 49-minute making-of hosted by James Earl Jones. For those who remember, this was released on a separate VHS tape years ago. Following that is a selection entitled “behind the scenes,” split into seven parts that cover foley effects, location scouting, pre-production, animatics, storyboards, and other archives. Again, nothing here is new, just included for completions sake. A brief promo for the upcoming video game by Telltale might as well be tossed in with the trailers, and the disc is BD-Live & D-Box compatible.